Today, we compare Clemson's FB/TE recruiting endeavors to ACC Coastal teams.  Assumptions made in creating this article can be found here.  I should point out that we strictly used www.scout.com position classifications.  It is possible that some players ended up at a different position ball after they arrived on campus for any of the schools in this article.

Like we discussed in the ACC Atlantic article, the decision to lump together FB/TE recruiting was for various reasons, including the commonalities between the two positions.  We had to make a decision, and the decision was to separate tackles, guards, and centers from the TE's and halfbacks from the fullbacks.  Because these two positions share blocking responsibilities as well as roles at the H-back position, they were lumped together.

Table I and Figure 1 (below) both illustrate Clemson's ranking based on defensive line class size since 2006.  Clemson (at 1.33 players per class) was second to last in this category.  North Carolina led the Coastal with 2 FB's/TE's signed per class while, surprisingly, Ga Tech averaged well less than one player per class since 2006.   Overall, Clemson was below the ACC Coastal average of 1.57 players per class. 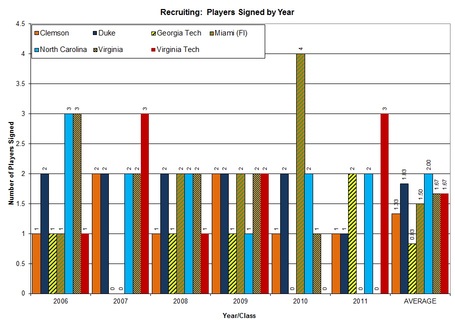 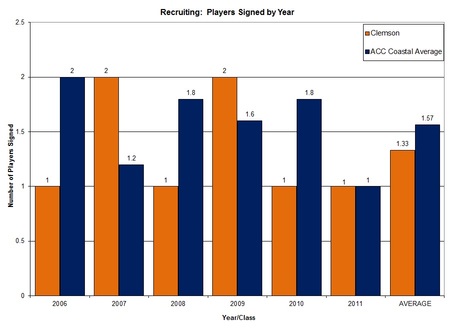 Table II and Figure 3 show the average star-rating per player for each team, as shown below.  Clemson (2.2.92 stars/player) finished behind only UNC (averaging just over three stars per player) in this category.  You'll notice that Clemson's 2008 and 2011 classes each averaged four stars per player per class thanks to Dwayne Allen and Eric MacLain.  Clemson finished above the ACC Coastal average of 2.77 stars per player since 2006. 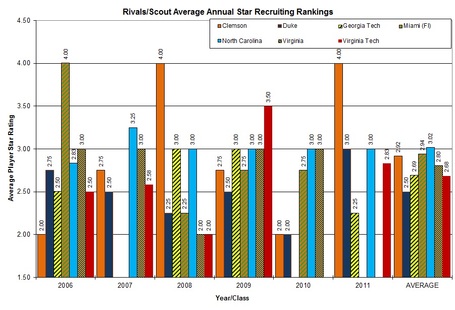 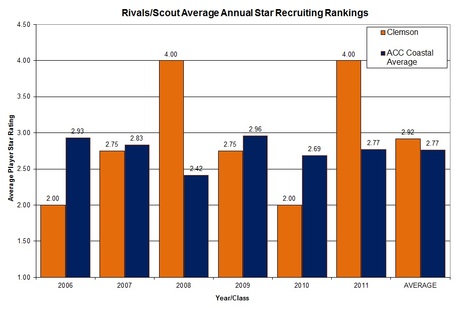