We continue to examine how Clemson's two-deep roster matched up to opponents from a season ago.  Today we compare the Clemson Tigers and South Carolina Gamecocks just prior to their annual post-Thanksgiving football matchup.  We were able to attain the two-deep roster posted on Tigernet prior to the Clemson/Carolina matchup for this exercise (special thanks to T-Net for this info and STS member RazzMcTazz for running down links to the pregame two-deep for us).

We should not have to tell you this, but some folks debate what to take from these articles.  We expect you, the reader, to form an opinion of your own.  Often we will give you our take on things, but you should independently form your own thoughts based on information out there.  This article shows recruiting data for the two-deep roster.  It does not weigh experience nor does it evaluate coaching, preparation, etc...  We think this is an interesting and valuable tool and useful in overall program evaluation because there is a link between these star ratings and other metrics in both college football and the NFL. Clearly, the results of last season's contest did not mirror the data you see below, so you know there is much more to college football than February's Signing Day.

The matchup numbers show a Clemson team with overall higher star ratings.  The Tigers averaged 0.40 stars better than its in-state rival offensively, the Gamecocks were slightly better than Clemson on the defensive side (0.01 via mathematical rounding).  Clemson was 0.02 stars per player better on special teams.  Overall, Clemson maintained a 0.15 star average advantage per player over the USC. 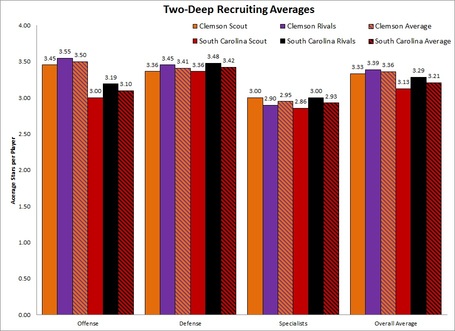