Here we compare CU's QB recruiting over the past six classes with teams in the ACC Coastal.  Again, we'll talk only about the core numbers and not about circumstances surrounding these items.  We did a quick and dirty breakdown of the specific QB situation at Clemson earlier.  Follow this link to see what each signee did while at CU and what we thought of the scholarship allocation.

Again, the quarterback position is different animal than other positions and  we think it is important to have 3-4 capable quarterbacks with each optimally in a different graduating class.  This puts a necessity on bringing in at least one good quarterback (minimal) every other class.

Table I and Figure 1 (below) both illustrate Clemson's ranking based on QB class size since 2006.  Clemson (at 1.33 players per class) recruited fewer QB's than Georgia Tech (1.67 per class) and Virginia (2 per class).  The Tigers recruited the same number of players as UNC and eclipsed Duke, the "U,", and Virginia Tech in terms of raw numbers.  Overall, the average ACC Coastal football program brought in slightly more (0.10 per class) than Clemson did from 2006-present.

Notable items in this category include Virginia's four QB's in 2010, Miami's three QB class of '08, GT's three QB clas in '11, and Clemson's three in a class this past February.  Overall, Clemson appears to be in good shape numbers-wise compared to their ACC Coastal peers despite being slightly behind the average.  I'll note that we would have liked to see one QB taken in '10 to better spread out the level of experience on the team at this position. 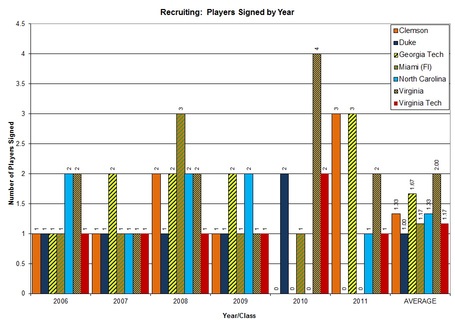 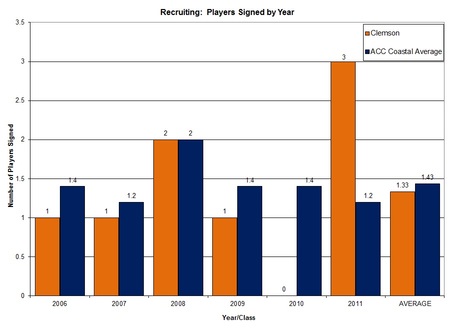 Table II and Figure 3 show the average star-rating per player for each team, as shown below.  Clemson (3.52 stars/player) led all teams in average star-rating.  Clemson benefitted greatly from the '07 (Willy Korn) and '09 (Tajh Boyd) classes to score this average.  North Carolina finished just behind CU at 3.40 stars per player.  The Tarheels' average was improved by signing four star players Mike Paulus ('07), A.J. Blue in 2009, Bryn Renner in 2009, and Marquise Williams in 2011.  Virginia Tech's Tyrod Taylor was the only player in this analysis to gather five star ratings from both Scout and Rivals (Boyd scored five stars with Scout and four with Rivals).

Overall, Clemson was a little over half a star per player better than the Coastal average.  Interestingly, only Duke and Virginia averaged less than three stars per QB signed over this time period. 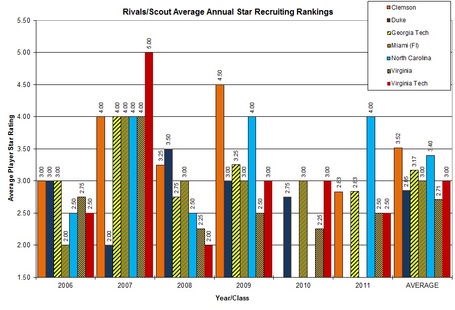 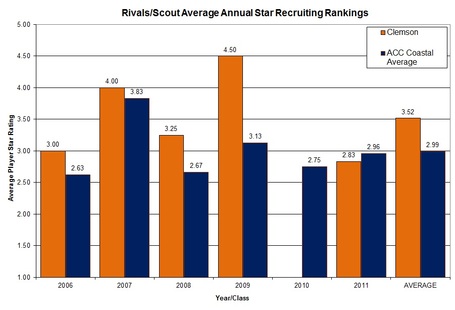 On average (from 2006 to present), and just looking at these numbers, Clemson appears to be on par in terms of players signed and well above average compared to their ACC foes' incoming talent ratings.  We are pleased with the quality players the Tigers bring in at this position and possibly could have used another QB signing compared to Coastal foes.  Again, we would have liked to see a quarterback signee in the '10 class and think Clemson may have made up for this by signing three in '11.