We have been focusing on Clemson's recruiting strategy and effectiveness compared to its peers and today we wanted to examine Clemson's recruiting budget compared to other schools in the ACC and SEC.  As with our overall athletic department budget comparison between Clemson and other ACC and other SEC schools, we attained the raw data shown throughout this article through www.usatoday.com.  As with our previous articles, info for several schools (Boston College, Duke, Miami, Wake, Vandy) was not available and is not presented in this analysis.

We need to give you the same caveat we gave you in earlier pieces per the USA Today website:

We will again point to an in-depth article we put together regarding the Clemson IPTAY and athletic department budgets for 2010.  This data was attained from Clemson/Katie Hill directly, so these numbers should be the most up to date and comprehensive for Clemson.

Table I and Figures 1 and 2 (below) show recruiting expenses occurring for Clemson and other ACC schools.  The data clearly show that Clemson's average annual recruiting spending (approx. $931k per year) is the ACC statistical median.  Georgia Tech ($1.22 mil per year), UNC ($1.05 mil per year), and UVa ($1.09 mil per year) spent more on recruiting.  I was not really shocked with the UNC and UVa numbers as they seem to spend more than others in everything, but was a little surprised that Georgia Tech led the league in terms of money spent on recruiting.  Clemson trailed the six-year league average by a little over $30,000 per year.  Clemson has, however, spent more money on recruiting than the average school in each of the last three academic years studied. 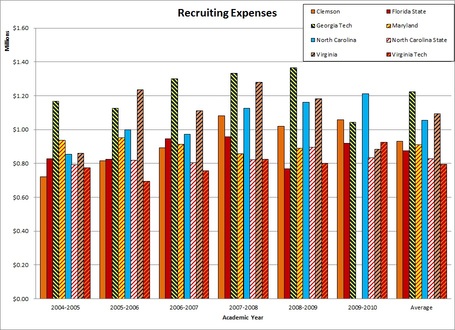 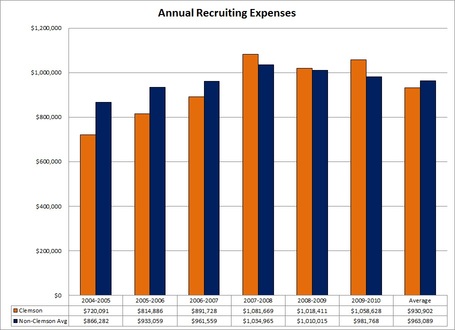 Table II and Figures 3 and 4 (below) show recruiting expenses occurring for Clemson and SEC schools.  This data shows that the average SEC school spends over $200k more than Clemson per year on recruiting.  Further, Clemson spent less on recruiting than any of the SEC teams except Ole Miss, Miss. St., and South Carolina.  It should come as no surprise that Tennessee (at nearly $1.8 mil per year) led this statistic, as they have a lot of money to spend AND the relative lack of in-state talent forces them to utilize more resources to get quality talent.  If you are still interested in the SEC figures, Team Speed Kills did a nice piece examining these items. 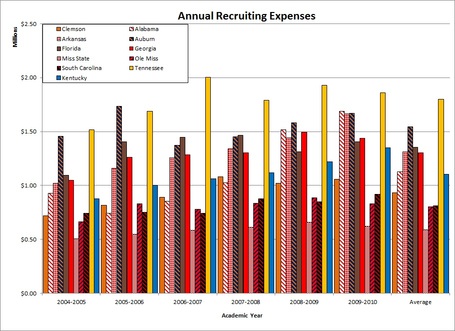 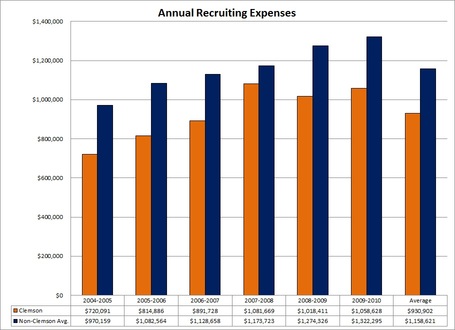 Overall, Clemson was about average compared to its ACC counterparts and below average compared to the SEC teams in terms of recruiting spending.  This is about what I expected to see before putting this analysis together.  I was a little surprised by the relatively low spending outlays by both South Carolina and Florida State.  The Florida State numbers can be explained by reasoning that FSU built a pretty stout brand name in the ‘80's, ‘90's, and early ‘00's and that Florida is simply flush with athletic talent.  I was also a little miffed seeing Auburn spend over $400,000 per year more than Alabama although Bama did ramp up spending by over half a million dollars between the '07/'08 and ‘08/'09 academic years.