The second set of keys to go through is how linebackers read the running back on the snap. Recall we said that the RB key is the simplest read to make, but that OL keys are truer reads. The concept behind going with just RB reads is because its easiest to teach and simplifies the scheme, and lets faster players attack and be aggressive. Its not something you can give to all 3 linebackers, and giving the MLB only a RB key is not wise. Its also going to cause problems when you face a heavy play-action team because the LBs will come up nearly every time the ball fake is made.

In 2-back schemes, the LB with the RB key focuses on the nearest back to him, or with the I-formation/Pistol the tailback. The reaction is made based on the path the RB takes on the snap.

RB Inside path - LB attacks his primary gap. If its the MLB in the Under, he goes straight to the B-gap. If its the WLB, he goes to the weak A-gap. He reacts exactly like the down block guard read. 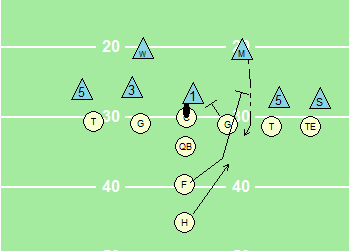 RB Outside path - LB shuffles and reads his primary gap for a threat. If his primary gap is open, he can charge through the gap. If the gap is closed due to a Veer block, he immediately shuffles because the DE is supposed to now cover his B gap (block down step down rule), and the LB switches with him to take the C-gap. If its the option, he has to hit the QB. 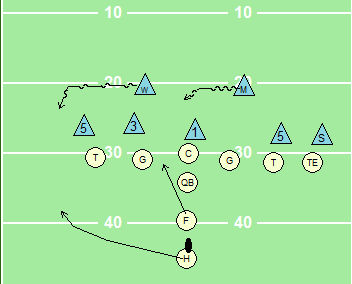 Full flow (both backs) away - LB shuffles to the flow, but must stay on the outside hip of the RB in the backfield to prevent the cutback. If the backside linebacker crosses the RB's face, the cutback lane is wide open. Learning this discipline is probably one of the toughest things for a freshman linebacker playing this one-gap technique. Notice the MLB below has not crossed the HB. 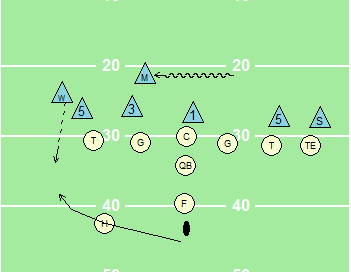 For two-gapping, the LB cannot just shuffle. He must attack his away gap directly. He steps laterally once, then crosses over and charges that gap. If the MLB above is 2-gapping, he jumps into the weak A gap immediately. He must be aware that the Center can come off the scoop block or that a Guard may be coming off a double-team block to hit him and seal off the backside. If the away gap is open, he takes it. If its closed (like a toss sweep outside), he shuffles around to the first gap that is open.

Pass -  if the RB shows block, or pulls out late for a route, the LB responds with his normal coverage. In some schemes he is told to "stack", or sit on the RB. Stacking is the smart play against a team that has a skilled receiver that likes to send him out late.  If the LB hasn't taken a big drop (in zone) then he can respond to the late release. In matchup zone stacking is common, and the LB stacks until another receiver enters his zone. In man coverage, the stacking linebacker is basically the Robber.