Today, we compare Clemson's special teams recruiting endeavors to ACC Coastal teams.  Assumptions made in creating this article can be found here.  I should point out that we strictly used www.scout.com position classifications.  It is possible that some players ended up at a different position ball after they arrived on campus for any of the schools in this article.

We probably need to tell you that this analysis is very different from the others because special teams is extremely unique.  Typically, special teams units are largely composed of non-starting position players and walk-ons.  Many specialists, particularly kickers, who play vital roles in the games are preferred walk-ons who are able to earn playing time through special teams.  We'll show the data for special teams recruiting but don't really know how vital all these numbers are based upon the impact of non-starters who play special teams and the large number of walk-ons we see week after week.

Table I and Figure 1 (below) both illustrate Clemson's ranking based on defensive line class size since 2006.  Clemson (at 0.67 players per class) was tied with a host of other teams for most players annually signed.  Interestingly, Virginia Tech had the fewest ST players signed since 2006 with one signee in 2009. 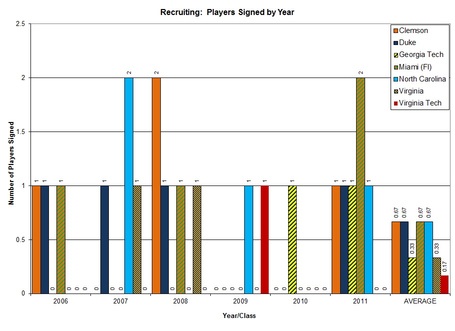 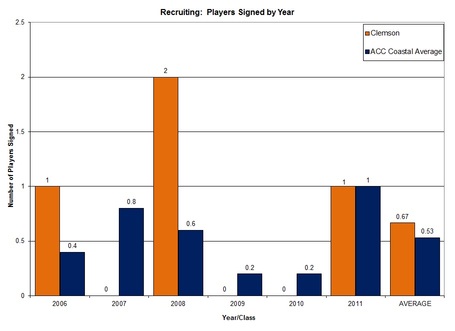 Table II and Figure 3 show the average star-rating per player for each team, as shown below.  Clemson (2.58 stars/player) finished behind Miami (2.67) in this category.  Clemson's average was buoyed by signing Greer native Richard Jackson (three stars with both services) back in the 2006 class. 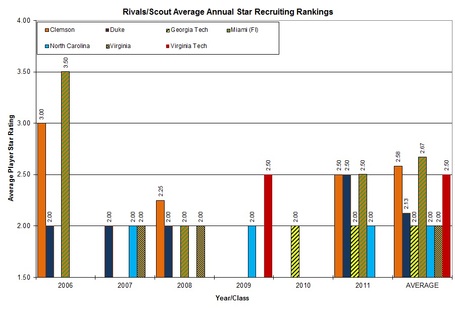 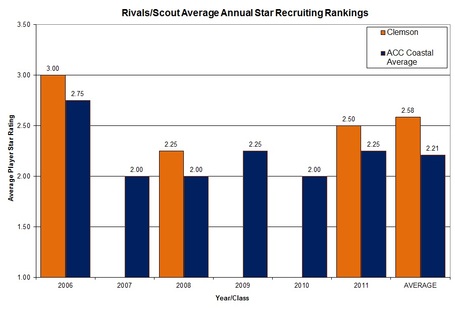 Again, with special teams being comprised on walk-ons and position players, it is tough to fully understand what these numbers really mean.  Even with kickers, many starting kickers/punters come to school as a walk-on or preferred walk-on and earn the kicking duties through almost a tryout process.  This system makes a meaningful recruiting analysis extremely difficult when you base your opinions on the Scout/Rivals ratings only.