We are left with two groups of players recruited in our position recruiting analysis, special teams and fullbacks/tightends and we'll post this one for the sake of completeness. Today we want to look at special teams recruiting versus ACC Atlantic foes.  Assumptions made in creating this article can be found here.  I should point out that we strictly used www.scout.com position classifications.  It is possible that some players ended up at a different position ball after they arrived on campus for any of the schools in this article.

This analysis is very different from the others because special teams is extremely unique.  Typically, special teams units are largely composed of non-starting position players and walk-ons.  Many specialists, particularly kickers, who play vital roles in the games are preferred walk-ons who are able to earn playing time through special teams.  We'll show the data for special teams recruiting but don't really know how vital all these numbers are based upon the impact of non-starters who play special teams and the large number of walk-ons we see week after week.

Table I and Figure 1 (below) both illustrate Clemson's ranking based on defensive line class size since 2006.  Clemson (at 0.67 players per class) trailed only NCST in terms of players signed.  Interestingly, NC State chose to sign three specialists in their 2011 class.  It is pretty common to have classes and consecutive classes where no specialists are signed. 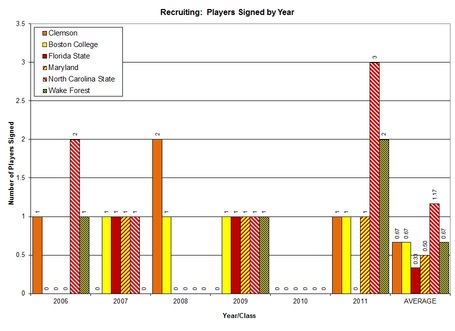 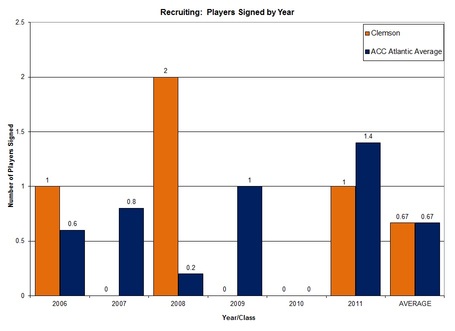 With such a small list of signees, we have used Table III to identify all specialists signed from '06 to '11 by ACC Atlantic schools. 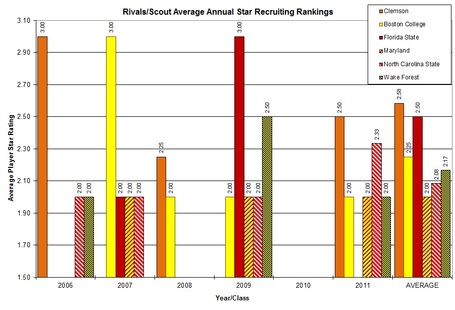 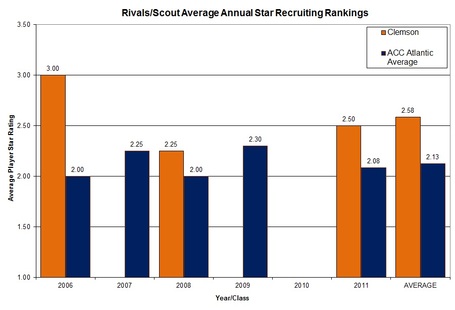 What does all this mean?  That is a pretty good question, especially in the kicking department.  A coaching staff really has to think a lot of a kicker to offer a scholarship.  The decision on signing specialists is a recruiting strategy.  Do you use a scholarship on a kicker or offer him preferred walk-on status and go after another guy?  These are the decisions staffs have to make.

The lone item I do not understand is signing a long snapper.  I have never been to a high school game and focused on a long snapper.  Typically, you can train a lineman or linebacker to snap and get good snaps out of this guy without devoting a scholarship to a high school snapper.  In case you are wondering, Matt Skinner was listed by Scout as an OT and Rivals as and ATH, so his scholarship was not included in these numbers.