Inside the Clemson Offense: Wheel Route

Share All sharing options for: Inside the Clemson Offense: Wheel Route

The wheel route is a simple route that often capitalizes on personnel mismatches, defensive confusion, and poor fundamental pass coverage.  The wheel route is useful against man-to-man coverage as well as various zone looks.  When run by a receiver, an inside receiver typically runs what appears to be a speed-out then cuts up-field.  When utilized by a running back, the back gets into the flats on what looks like a flair or speed-out route then gets up-field.  The back commonly lines up in the H-back/wing position or is motioned prior to running a wheel route.  Ideally, whoever runs the route will get upfield near the numbers and his route will end in a similar position to a split-end/flanker running a fade. 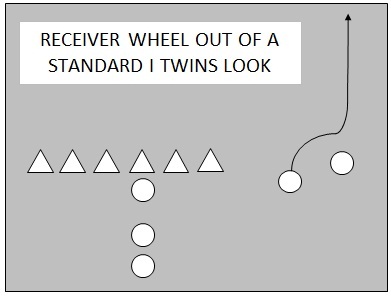 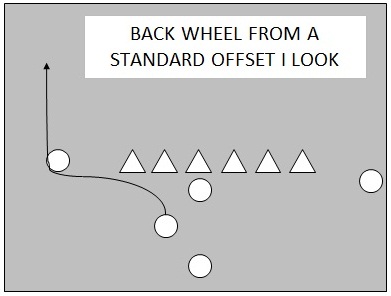 We are discussing this route because it was a popular choice for the Tigers in the past and will be utilized by this season's opponents.  With Auburn's heavy reliance on this route and Chad Morris being a Malzahn disciple, we expect to see a considerable number of wheel routes this season.

What is so special about this route?

This route is often used to exploit aggressive coverage and isolate a fast offensive player against a slower defender.  It poses a matchup problem moreso than a scheme problem. A great example of such is C. J. Spiller's long TD catch in '09 at Ga. Tech.  We provided a more in-depth discussion here, but essentially Clemson was able to run the weekside corner off with a deep post.  The H-back successfully sold his speed out/flair, getting the linebacker/strong safety to hesitate for a split second.  He then simply outran the outmatched linebacker/SS who had no support over the top. 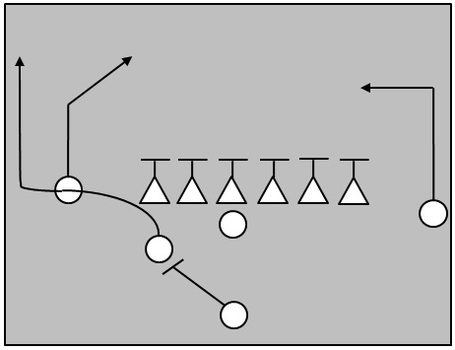 It is common to feature the wheel route in a variation of the mesh play.  In the video below, Auburn appears to transition into a cover 3 look on the field side.  Clemson uses motion out of the backfield, presenting a late presnap shift into a trips field-side look.  Clemson fakes a screen Z and runs X to the middle of the field on what appears to be a variation of a slant and up.  The back came all the way across the formation off the Zoom action and cuts behind "X" then runs the wheel to get upfield.  The combination of motion into trips, a fake screen, and the underneath mesh action off the wheel route confuses the safety/corner and eventually resulted in a Jamie Harper touchdown. 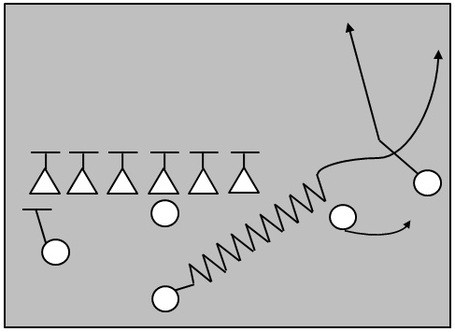 Miami used confusion and the wheel route to score against Clemson last year.  The ‘Canes came out in an offset I with twins right.  They motion their flanker (lined up at the bottom of the screen) into the formation and fake an end around.  Miami then brings the split end into across the field via a slant.  This action rubs the defenders and creates chaos in the middle of the field and did not allow the linebacker to get in proper cover position to defend the back out.  All of this commotion allows the fullback to slip out of the formation and into his wheel route for an easy touchdown. 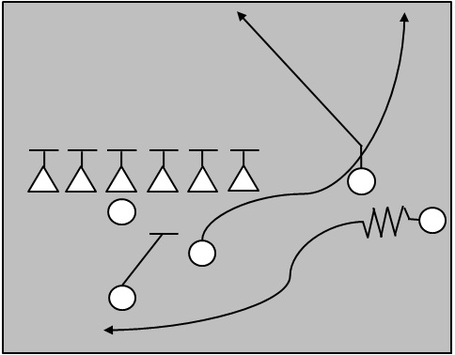 Side note:  Notice the Miami player who appears to be lined up in the TE position (third to the right of the center) is inelligable, as he is covered by the inside twin receiver.  It does not appear as though the Clemson defense notices this in their presnap read.

Another utilization of the wheel is through what is known as a "shadow" route.  A shadow route refers to a combination of routes in which one route follows the other, with the trailing route being referred to as the "shadow".   Here we will discuss a basic twins look against a three-deep zone. 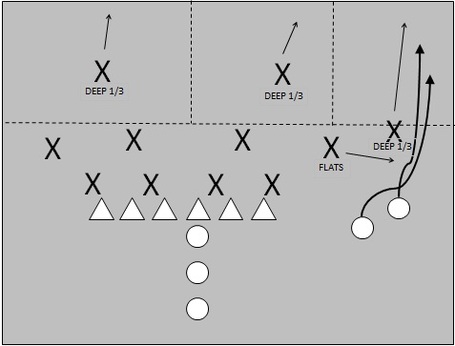 The split end runs a fade, making sure to attack the corner's outside shoulder.  The corner has deep third responsibility and must turn and run with the receiver.  The weakside linebacker has flats support.  Often he will jam the inside receiver, then sit.  Knowing this, the slot receiver wants to get outside quickly then up the field.  Since the safety has deep third coverage over the middle, there should be a soft spot immediately behind WILL.  The pass has to be thrown before the safety can provide help.