Today, we compare Clemson's defensive line recruiting to non-ACC teams.  Assumptions made in creating this article can be found here.  I should point out that we strictly used www.scout.com position classifications.  It is possible that some players ended up at a different position ball after they arrived on campus for any of the schools in this article.

Table I and Figure 1 (below) both illustrate Clemson's ranking based on defensive line class size since 2006.  Clemson (at 3.83 players per class) was well behind the rest of the field.  Auburn, Alabama, and South Florida each averaged six or more DL signees per class.  The closest team to Clemson in this category was the Georgia Bulldogs at 4.50 players per class.

Notables:  South Florida recruited eight or more linemen in three of the six classes.  Bama brought in six or more in each of its past five classes, and Auburn did not have a class in this sample with fewer than five DL signees.  It is clear that Clemson needs to bring in another lineman at minimal to keep up with the schools listed in this article. 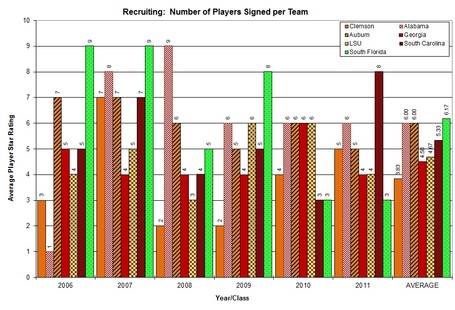 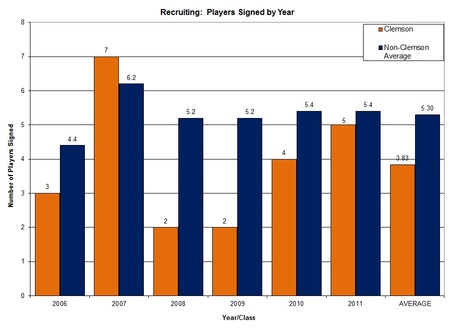 Overall, there were 81 players signed by schools in this sample who graded out at four stars or greater by BOTH Rivals and Scout.  We did not have enough space to list all these players, but are providing a graph that shows the numbers per team of these four star or better players.  LSU brought in 19 such players, Alabama 16, Georgia 13 over this time period.  Clemson and Auburn both had ten players signed and the Gamecocks brought in nine four star defensive linemen. 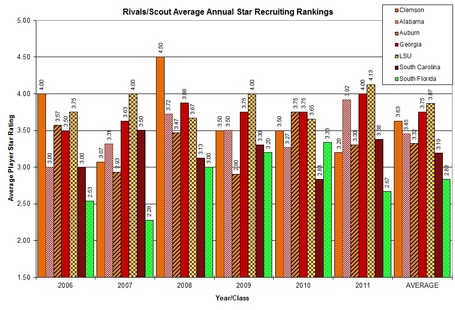 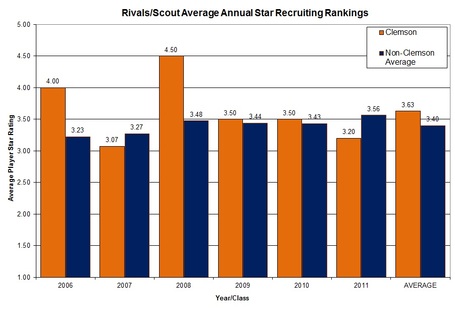 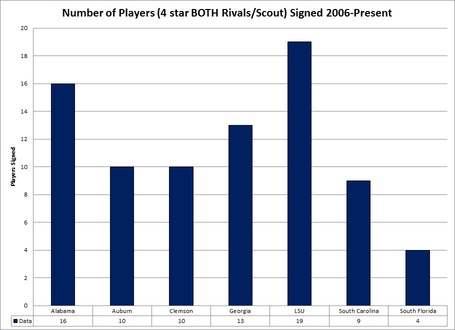 Clemson again brought in quality talent when compared to its non-ACC foes.  The issue we see here is the quantity.  For example, Clemson's star average was better than Alabama's yet Bama brought in 60% more unanimous four star (or better) linemen than the Tigers.  Clemson trailed all schools in this survey in linemen signed, trailing the average by nearly a lineman and a half.