This blog was long enough that I needed to split it up, so look for the second part later today.

In the last post we talked about reading offensive linemen as the keys in what tells a LB what to do and where to go on a particular play. Each LB is assigned a primary gap to control. Every gap must have someone over it, or assigned to it, for the defensive front to be sound. In some defensive schemes the DL can have single-gap responsibilities while a LB has 2-gap. There is a difference between the assignments of a 2-gap vs 1-gap linebacker, but in some fronts a single linebacker may be a 2-gapper when the other linebacker(s) are 1-gap players.

In both the 4-3 Under and Over fronts, it is common to assign 1-gap responsibilities to the OLBs and the MLB, but you can assign and teach it a different way, making it a 2-gap assignment for one or more of the linebackers. This stuff depends on the coach and his background and preference. In my mind, the OLBs are one-gap players, but the MIKE is a 1-gap assignment that has to play like a 2-gapper.

MIKE is the one ‘backer in a 4-3 who has to be your prototype LB, if you can get one in recruiting, who is both an excellent hitter and an intelligent football player. He should be the leader of the defensive unit and he should bring the pain on any play run inside. Sometimes he has to cover for a weaker player beside him, be it from youth or lack of talent, and his one-gap assignment on paper turns into a 2-gap.

What I diagram here for the MIKE is an Under front definition, and we’ll note some differences with the Over. A 3-4 defense would be no different in what we discuss except for alignments. All alignment techniques for linebackers add a "0" to the standard defensive line numbering, so a LB that plays directly behind the head-up NG is playing a 00-tech. If he’s behind the 3-tech DT, he’s playing a 30, etc. All LBs are, except by specific scheme or gameplan, to align 4-4.5 yards off the ball.

In the Under, the MIKE aligns unprotected over the frontside guard in a 30-technique alignment. WILL is to the backside of the TE (or run strength, sometimes there is a difference) playing behind the 3-technique DT in either a 20 or 30-technique. SAM plays frontside off the TE, on the LOS or slightly off (if he’s a smaller guy or inexperienced), in a 7 or 9 technique in a 2-pt stance. This is diagrammed below. 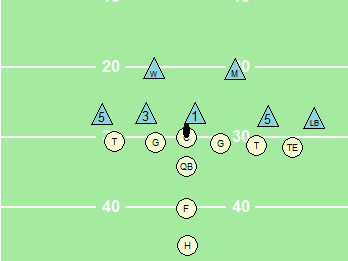 As you can see, the "bubbles" (uncovered gaps) here are 2 in the Under – and one is pretty small. There is an uncovered gap on the frontside guard’s right hand, the B-gap or frontside 3-gap, whichever you wish to call it. MIKE’s job is to cover that gap, so he aligns in a 3-technique at 4-4.5 yds depth, a 30. WILL needs to be able to get outside on weakside run plays, but is responsible for the uncovered A-gap (the small bubble), so he can be pushed wide to a 30 or pulled in a step to play 20.

WILL’s primary assignment is single-gap, which is that weak A-gap, when the ball comes towards him (flow-to). He is not required to cover that outside C-gap beyond the OT, which is the Bandit’s job. If the ball goes outside the Bandit (weak 5) should be the first man to hit him, not WILL.

MIKE is a single-gap assignment too, just the frontside B-gap on flow-to. However, if the ball goes weakside he has another assignment, the weakside A-gap. In a sense, he’s got a 2-gap assignment. If there is full-flow (2-backs) away, like in a sweep play, he shuffles outside and hits the first open gap he sees.

SAM in the Under plays a 7 or a 9 technique on the TE, but he does not have to play on the LOS. Generally the leaner and less experienced strongside backers get moved off the LOS, or play a 9-technique off the TE's shoulder on the line. His job on the run is to control the outside D-gap. He is truly a one-gap player, but his assignment is difficult because of the pass read he constantly must make. This is where you would want your freak athlete in the Under defense.

SAM in the OVER is a different player, more like WILL. In the Over, the strongside DE gets moved to the 9. They are both moved outwards to a 50-alignment. In the Over you could then think of them as equal players, and in the textbook Miami Over they are lined up on the same side no matter where the TE goes. However in practice nowadays Over teams will pick a SAM much like an Under team does, and put the bulkier player there to tangle with TEs. His assignment is the C-gap but he commonly does stunts with the 9-tech end, and so they often switch gaps. 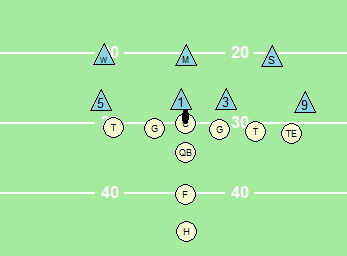 You can see now that MIKE is aligned behind the NG, in a 00. On paper it looks like his job is the strong A gap, but he is again aligned such that he can play this as a 2-gap player. He needs to be able to go to either side and often gets the assignment of the weak B-gap. 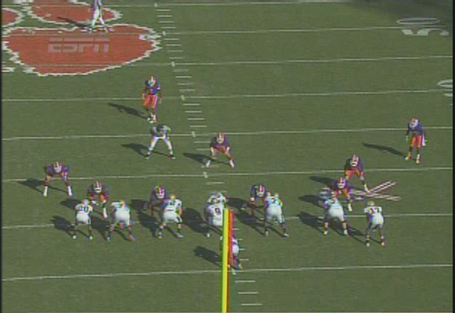 Just as another example notice this front alignment we showcased against GT's flexbone.  This is not the Under or the Over, it is an EVEN front (center uncovered). It is a front called by the generic name "G" with various names like "Tight G" or "Heavy G" that is descended from the old 50 front. Two guys are playing 5-tech with a 2i to the boundary and a 3 to the fieldside. Virginia Tech shows things like this quite often. Kevin Steele tweaked this one solely for GT but you can pick out the assignments. Notice the left wingback and his alignment? Notice where he's looking? He's cheating and showcasing what he's going to do if the defense is paying attention. The OLBs are aligned off the outside shoulder of the WBs to make it difficult to be arc blocked and to give them time to read an arc release pass. 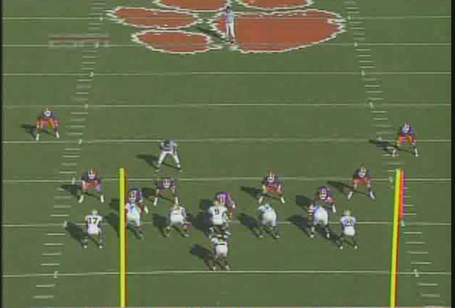 This 3-4 we showcased against GT is an OKIE front that is usually a 2-gap front, but I never noticed us playing it as a 2-gap. Notice we're at midfield and this is truly an even front, but I wonder if Nesbitt noticed that one ILB is playing a 20 and the other a 30. One OLB is aligned further out than the other and the safeties are staggered in depth.

If one ILB is over in 30, then the A-gap to that side is probably where the NG is going. These are the types of things Nesbitt is supposed to be taught to read.

It should be easily apparent now that where the guys line up tells you what their assignment is, unless there is a stunt or blitz called.