We continue to examine how Clemson's two-deep roster matched up to opponents from a season ago.  Today we compare Clemson and FSU circa November 8, 2010.  We were able to attain the two-deep roster posted on Tigernet prior to the Clemson/FSU matchup for this exercise (special thanks to T-Net for this info and STS member RazzMcTazz for running down links to the pregame two-deep for us).

The matchup numbers show a Clemson team with superior recruiting talent on offense and a Seminole squad with more defensive and special teams talent.  Overall, Scout rated Clemson's talent slightly ahead of the ‘Noles and Rivals scored the Seminole talent 0.15 stars per player better than Clemson. The average of both services gave FSU an overall 0.06 stars per player advantage heading into the contest. 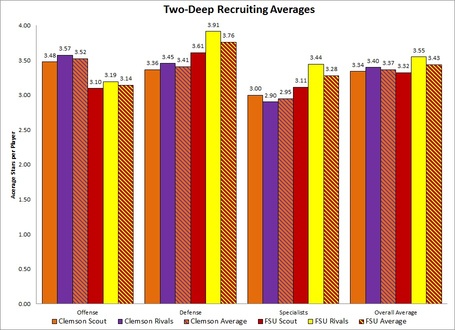