Today, we compare Clemson's defensive line recruiting endeavors to ACC Coastal teams.  Assumptions made in creating this article can be found here.  I should point out that we strictly used www.scout.com position classifications.  It is possible that some players ended up at a different position ball after they arrived on campus for any of the schools in this article.

Table I and Figure 1 (below) both illustrate Clemson's ranking based on defensive line class size since 2006.  Clemson (at 3.83 players per class) was well behind Virginia Tech (5.17 players per class) and also trailed Miami and UNC at four players per class each.  The Tigers recruited more players than Duke, Virginia, and Georgia Tech.  Overall, the average ACC Coastal football program brought in 0.36 lineman (at 3.47 per class) fewer than Clemson from 2006-present.

Notable items in this category are UVa's and Va Tech's '11 class (seven defensive linemen) and Clemson's seven total linemen in '07.  Clemson brought in four and five linemen over the past two seasons, respectively.  Georgia Tech's 2.33 linemen per class was surprisingly low.  You should really never have a class with only one defensive linemen and the Yellow Jackets did this three times over the past six classes. 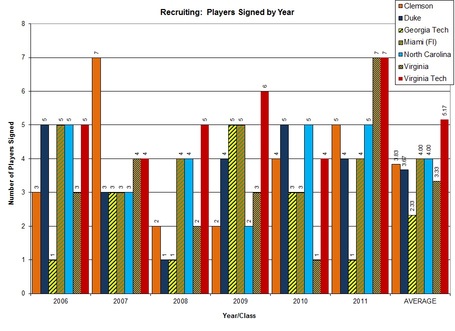 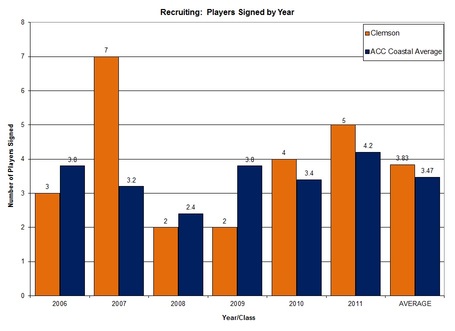 Overall, there were 32 players signed by ACC Coastal schools who graded out at four stars or greater by BOTH Rivals and Scout.  We are providing a list of these linemen in Table III below.  Clemson accounted for ten of these signings.  You notice that Corey Crawford is listed in both the '10 and '11 classes, so the CU signings only include nine actual players.  Miami, UNC and Va Tech had the vast bulk of the remaining players on this list. 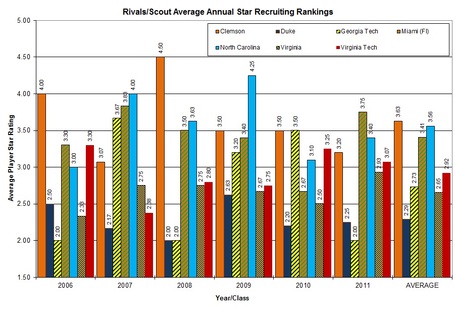 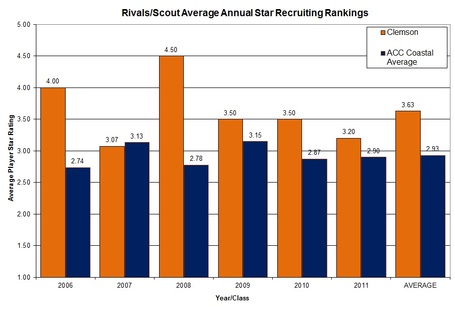 Clemson was again above average in terms of number of players signed and led this group of teams in terms of stars per player.  All around, it appears as though either Clemson or UNC did the best overall recruiting DL based solely on combined numbers.  Clemson could improve by bringing in another quality lineman or two, but overall the Tigers look pretty good compared to the ACC Coastal.