Today, we compare Clemson's defensive line recruiting endeavors to ACC Atlantic foes.  Assumptions made in creating this article can be found here.  I should point out that we strictly used www.scout.com position classifications.  It is possible that some players ended up at a different position ball after they arrived on campus for any of the schools in this article.

Notable items in this category are FSU's '11 class (8 defensive linemen), Clemson's seven total linemen in '07, and NC State's nine recruits in the 2009 class.  Clemson brought in four and five linemen over the past two seasons, respectively. 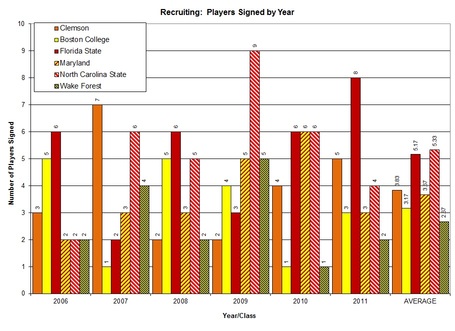 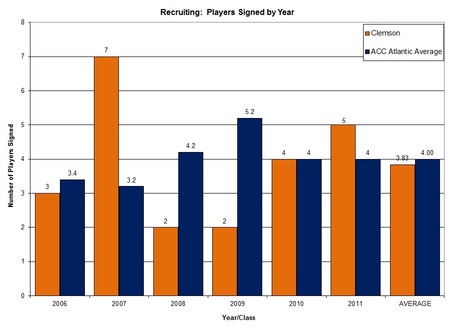 Overall, there were 23 players signed by ACC Atlantic schools who graded out at four stars or greater by BOTH Rivals and Scout.  We are providing a list of these linemen in Table III below.  Clemson accounted for ten of these signings.  You notice that Corey Crawford is listed in both the '10 and '11 classes, so the CU signings only include nine actual players.  FSU brought in 11 players on the list and Maryland two. 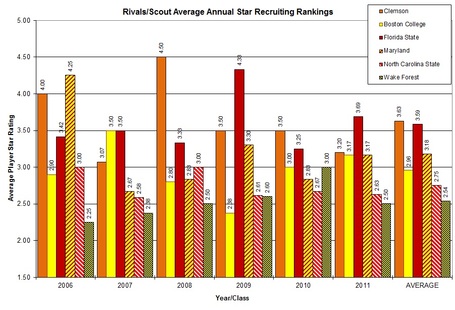 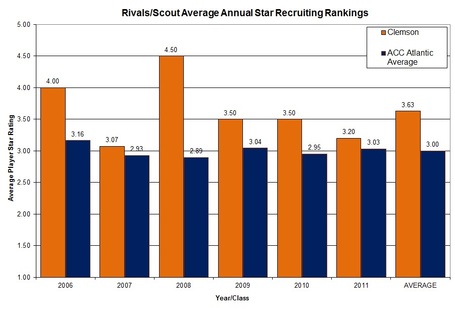 Clemson is below the ACC Atlantic average in terms of defensive linemen signed over the past six years.  CU was dwarfed by both NC State and FSU in this category, as each recruited over a lineman and a quarter more than the Tigers on average.  We'll note that NC State's 2.75 stars per player is well below CU's average.  Clemson lead the division in stars per player, and I think we can all agree that the quality on the defensive line front was excellent over this time period and only rivaled in-division by Florida State.  We would like to see Clemson get another quality lineman per class in to better compete with the ‘Noles.  Otherwise, we look good in this aspect of our recruiting strategy.