Now that the fundamentals of the job have been covered, we're going to go into an outline of how to play the position and what they look for in players. After that, based on feedback, we'll go into some specifics of various defensive schemes.

First though, you have to know what the linebacker is actually looking at when he lines up. Where he lines up is based on the front call, and each scheme will have a set of fronts that they predominantly run, but the offensive players are what he looks at once he knows where to stand and most of the time those don't change. The "Key" is simply the offensive player(s) that a defender watches pre-snap and just afterwards.

There are 3 types of keys that LBs look at:

It used to be that you had more practice time in college football. Danny Ford would drill his offensive linemen all night long until they got a particular play correct, but now you have a couple hours of field time and thats all. Thanks to this cut in practice time, fundamentals end up lacking because as a coach you have to cover the same amount of material in 2 hours that you used to cover in 3 or 4. Linebackers of 30 years ago used more offensive line keys, which rarely lie, and had better fundamentals even if their speed or strength isn't what it is in college football today.

Now as a coach you don't have the time required to drill and teach all the things the linemen do to your linebackers, so more and more coaches go to simple back keys for fast flow. Whichever way the RB goes, if he is your key, you go.

Triangle keys are a combination set, meaning you watch the nearest Offensive Guard or Tackle, then try to follow the back and where the ball is going when you decide to begin your steps forward. Its a little safer against Play-action but it'll still fool you every so often. If you can teach this one, and have players with good instincts, its a great way to go as a compromise. With offenses adjusting block schemes in spread offenses to confuse and misdirect, it may be the only way to go.

Linebackers are responsible for gaps in the defensive front. Usually you align them shaded to one side of the open gaps that aren't covered up by defensive linemen. Depending on the specific front you showcase, the linebacker may be responsible for 2 gaps most of the time. The 3-4 defense of Georgia Tech is set up this way, but UGA, Alabama, and the Dallas Cowboys use a 1-gap style. Nickel packages sometimes end up with a LB covering 2 gaps. There is a difference in how the linebackers play them and different ways to look at the thought process.

if you are told to cover 2 gaps, you are standing over a big bubble (weak spot) in the defense and looking at another bubble. You need to read the play quickly and get into a gap fast before the offense gets another blocker in there to double-team you. This is where you want a RB key. If he goes away, fill your backside gap. If he comes to you, fill your frontside gap. If he shows block or pass route, drop into coverage. Another advantage of RB keys, because of their simplicity, is that you can get young guys on the field quickly without confusing them with too much. 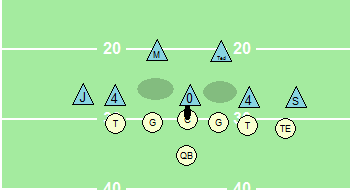 2-gap 3-4 defensive alignment called "OKIE". MIKE and TED align over the two bubbles in the front. Both are looking through the Guard into the backfield movement. Technically both of them may have a 2-gap assignment.

One possible 1-gap 3-4 defensive alignment. Everyone has a 1-gap assignment but MIKE is sometimes a 2-gap player.

Your problem comes up when the opponent has backs who can change direction really well, better than your linebackers, and who use more misdirection and play-action passing. If your LB only follows the RB, he'll be out of position and vulnerable to counter plays, end-arounds/reverses, or won't be in his zone in coverage. This is why the Flexbone and Dan Mullen's offense poses such problems for modern defenses: most linebackers are drilled more in RB keys, and they follow the back first. When 2 or 3 players cross its easy to be late with the key read, and when you mix in more passing its deadly.

Here is where OL keys come back into football. In the days of the wishbone, wing-T, and other triple option systems this is where you would spend your instruction time. OL keys very rarely lie. Big 300 lb linemen don't change direction well, and offenses won't send the ball in a direction without sending blockers too -- even reverses use blockers. A majority of the time, the LB is taught to read the block of the nearest OG. Whichever way the Guards go, the ball will surely follow.

We'll be covering the blocks that they see later and how to react. Fundamentally, when a LB is watching the block and not the back, he'll be able to set his base for shedding the block better as well. If you watch only the back, you can get blindsided or lead with the wrong foot into the blocker, meaning you'll be on the improper base and will be turned.

Another tip that OL show, without conscious thought, is the playcall by their stance. Again, if an offensive coach has to drill the same material in 2 hours that needs 4 to cover, little things end up lacking. Almost always you'll be able to see at least one offensive lineman who tips the play off by his stance and split. It is not something obvious to fans, and impossible to see on TV footage. His OL coach may not even know its being tipped off, but you'll find one almost every time with end-zone footage. Even if he tips it off 80% of the time, thats still 8 out of 10 times you'll know whether to back up in coverage or press a gap before the ball gets snapped.

Notice in this video how Maryland aligned their Tackles? Each time they ran this option play, they aligned him there. In every other play his alignment mirrored the other Tackle.

Triangle reads are what most pro-style schemes use now, but even with the triangle read one of the keys has to be drilled more and take precedence. Clemson uses triangle reads but the back takes precedence. The week we play Georgia Tech, I suspect the staff drills line reads much more. Triangle reads emphasize the nearest offensive lineman, OT or OG, and the TE for the outside LB, to the nearest RB and the ball. Basically he's being taught to look at all 3, but depending on the opponent, skillset, and youth of your player, you can only teach one and drill it properly during a week.

The SAM is aligned on the TE, so he'll key him, the nearest RB to him (pre-snap) and then the ball. He can look at the screws on the TE's helmet and see the RB in his peripheral vision, and he'll be able to tell from the release of the TE quite a bit about whether its run/pass or where the ball is going.

If the opponent runs a heavy package of Power O and Counter Trey (below diagrammed against an Over front), you might be better off drilling OL keys that week. Counters will eat you up if you only drill RB keys -- the backside LB will scrape on his first step playside and won't be there when the RB cuts back. If they only run Isolation and a few inside/outside zones, you can get away with more RB key drills.

The Counter Trey in the I-formation

I touched on it above, but linemen do give tips on the play call when their fundamentals are lacking. What a defense will do is allow one or two players to call out something to the defense when he sees a lineman tipping. It'll be a player who watches more film and is an upperclassman usually.

Pulling is something you want to look for as a LB. It may indicate a power, counter or a trap play is coming. Does one OL stand a step deeper than normal? Big guys step back so they can adjust to a stunt from your defensive line, or because they aren't quite quick enough to get to the other side into the hole. Does his stance differ from the linemen beside him? If his weight is forward, heel up, it indicates run. If his weight is back, off his down hand, with his head up higher (to see the blitz or stunt), you have a pass indicator.

Offensive line splits are someting you notice even more rarely but they tell you something about what the offense is trying to do unless they do it all the time the same way. Option teams used to do this much more, but even modern option teams like Navy or GT don't take advantage of this. Defensive players line up based on where the offense lines up, not a spot on the field. By that I mean that a 3-technique defensive tackle is lined up on the OG's outside shoulder no matter how far that OG lines up away from the Center. By doing this, the offense has created a bigger space between the NG and the 3-technique DT, possibly for an inside run up that A-gap. If its picked up, the LB can check to a different front that brings the 3-tech to a 2-technique or call an inside stunt. Teams that veer block or use more trapping widen splits to get better angles on defenders in space, so its not solely for inside running. Spread offenses that like to run (e.g., Rich Rod) usually use wide splits all the time. The Air Raid offense uses huge line splits as well.

On outside runs, the offense may tighten up the splits to bring outside defenders closer to the ball. It could make it easier to crack an OLB with a WR or get a FB on a Corner or SS, which you'd rather do because the CB will be faster in space than that FB.