Pursuit, movement to the ballcarrier/ball, is another fundamental that must be mastered for a linebacker once he gets free of a blocker. You would think this is very simple, but its not simply running to the ball. If that were the case, the faster players would always be playing the position. Here a player needs discipline and the proper technique to go about pursuing the ball.

Shuffling or scraping (the latter being the term I use) is a controlled lateral movement parallel to the LOS. Its usually used between the Tackles when the ball is moving the slowest and in areas where contact is a maximum. To master the shuffle step, the idea is first and foremost to remain square to the line of scrimmage. Doing so will let the LB be able to change direction easier should the play be cutback or a counter-type of play. Once your hips are turned you have committed to one direction and the extra second you need to flip them when the ballcarrier cuts back can make the difference between a TD and a short gain. The biggest plays in football go beyond the backside LB, who must stay on the backside hip of the RB. 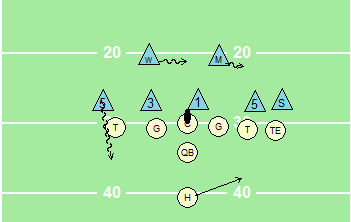 Under Front:The RB heads strongside, M sees the RB go past his assigned B-gap outside and shuffles out. WILL stays on the backside hip, and the backside DE awaits a cutback or end-around while slowly following along the LOS.

Note the Weakside LB in this clip below, he shuffles over too far and Spiller makes him pay for it.

Just like in defensive back coverage, there are ways to enforce the footwork the coach desires most. In DB coverage we highlighted the shuffle step or the backpedal. Here for LBs its just the sliding step close to the line. When he steps parallel, he does not cross his feet over. If this is the case, he can change direction in only one step and doesn’t waste any movement. This also slows him down, which is what is needed at this position. What if the backside linebacker turns his hips and follows the RB to the play side, only to have him cutback? Its too easy to overrun him and have the play go 60 yards.

LBs can get fooled by keys pretty often. Its just a part of playing the position. Offenses live off breaking key reads for linebackers. A good example would be to watch Georgia Tech play with multiple Wingbacks in motion behind the QB when he hands off to the FB. If the left Wing cuts behind the FB at the same time the ball is handed off, it could break the key read for two linebackers watching the two backs. The triple option that Johnson uses eats guys up because it breaks so many keys that way.

So you want to teach them to slow down and read their keys better, and forcing them to slide their feet makes them watch the play longer, and gives them time to adjust when their key is broken. Shuffling is just the initial controlled pursuit, and having the ability to quickly reset the base this way keeps them in good physical position to form the correct hit & shed base. He’s never more than one step away from forming the base.

Shuffling gives him time to sharpen his focus on the ball as well. At the line there are always arms going up and down and bodies falling on the ground, and those things distract the LB from the ball or blockers coming at him. Once he starts sprinting he won’t be able to adjust and he’ll become more reckless in his movement.

Scraping in this way also forces you to stay lower. It takes some hip, knee and ankle flexibility to do it right, all areas to look for when evaluating a young LB. If you’re not low, you don’t get under the OL’s pads to form the base for shedding blocks. When the LB takes on the blocker with the lead foot and shoulder base, its easier to open the hips and push off the blocker on the inside foot. If he meets with the opposite shoulder from foot, he’ll get turned away and cannot pursue because he cannot open his hips to shuffle.

As the ballcarrier gains speed, he will eventually have to turn his hips and pursue. This is called "alley pursuit". Normally when you hear the term "alley" for defensive play, it means that area just outside the OT/TE and inside the next WR. In our prior articles on coverage this is what we meant. This is an extension of that definition if you imagine the RB to be running off-tackle in that area. You want to pursue (as an Inside LB) inside-out on the ball – meaning from your natural alignment towards the sidelines. You try to keep your shoulders square for a cutback but the hips do have to turn to gain any speed. There should be outside help (an OLB or CB/SS) to force him back inside to you. When shuffling, the LB on the backside must stay on the backside hip of the RB. Going any further or crossing his face allows a big cutback lane to open. In alley pursuit though, you need to stay about 3 yards inside the runner as he heads to the sideline (or the outside help). This is because you’re in open field against elusive runners, and the blocks in this area are often crackbacks (or e.g., cut blocks) and once your hips are turned, you are not going to be able to reset the base as fast. The idea is to give the LB a cushion and time to react here, and not allow a 5 yard gain to become 50. 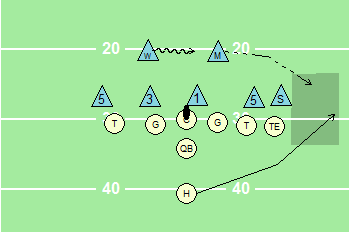 Under Front: MLB pursues inside-out and crosses his feet over to pursue when he sees the back going outside. The area known as the "alley" is shaded. WLB shuffles until he has to cross over to pursue, but must be there in case of cutback.

Crackback blocks are sometimes defeated with alignment (as in forcing the LB to face the QB initially, thereby making any WR block on him an illegal block in the back) or otherwise by the DB calling "crack!" outside and having the LB attack the WR directly.

Pressing is when a LB sees an open gap to the ball and charges. This is the area where the good linebackers separate themselves from the mediocre. When a LB is reading his keys and sees an opening to the ball, he has the ability to attack that gap even if it is not his assigned gap. This is not something you give a young and undisciplined player the ability to do freely. In effect, it looks like a run blitz or stunt, when that is really not the call from the coordinator. Saban does this quite often with his linebackers. They look like they’re blitzing, but in reality he has given them the choice of pressing a seam.

Deep pursuit angles are meant to stop the long TD play. If the ball gets outside the OLB he has to take a deep angle away from the ballcarrier so that he can prevent the score, hopefully one that can let him use the sideline as the 12th man. How do you teach it? There are several drills to instruct pursuit and work on the needed hip flexibility to be a good linebacker. What comes first is the demand for perfection. The coach must set a standard and stick to it when he grades the film each week. If a guy is in his gap but doesn’t execute the pursuit correctly, even if he makes the tackle, you grade him with a missed assignment. The common standard is 90-95 percent pursuit, which will depend on the coach. Most lean to the higher end. If a player performs at the right effort level for 65 plays at 95%, he’s going to have a good shot at making a great play. Once the coaches set that standard, and bench players who don’t give the effort, peer pressure should take over. Guys who play hard without a lot of talent can be valuable players if they make others play at the same effort level around them.

Pursuit drills are run at the end of practice, when the defense gets tired. That is where you see the ones who really care about doing it. It is also good to run them in 7-on-7 situations in practice. Basically all that needs to be done is to grade the pursuit effort of the defenders in response to the play run. Everyone must be taught to fly to the ball. If that happens, the ballcarrier will go down and someone may be able to strip the ball and recover it.

Various 3-cone and Jingle-Jangle drills are now the benchmark for measuring hip flexibility of a player. In the Jingle-Jangle you use 3 coaches and at least 1 player, but usually 2. Its also called a pro agility drill in the Combine. The 3 coaches are separated 5 yards apart from each other, so one is at 5 10 and 15 yards. The player straddles the 10yd line in the middle, and on the whistle he takes off to one side, touches the line that a coach watches, then turns and runs 10 yards back to another coach, then back where he started. If he’s within 0.5 second of his 40 time he’s usually doing really good. Another variation is to sprint to the first coach, shuffle to the 2nd, and then backpedal to the 3rd. It all depends on what the coach prefers to work on.

The 3-cone drill is similar and you can see it below. Pursuit is all about effort. If you teach and drill it during the week, you’ll see it on gameday.