The last set of fundamentals to go through before looking at LB play in various fronts is zone coverage. Zone does not have the same difficulties with play-action passing but its also a more reactive coverage rather than an aggressive coverage, though this depends on the exact scheme. Its idea is usually to give them the short completion and never allow anything to beat us deep. This forces the offense to complete multiple passes to move downfield. In modern college football more and more teams are going away from older reactive spot-drop zone coverages and into an aggressive match zone coverage. Most of the fundamentals are the same for either, with the critical difference being that a spot-drop zone has the defenders drop to a spot on the field, whereas the match zone team drops and quickly matches to the closest receiver. Boston College is a spot-drop zone team, probably one of the best at it in the nation. Clemson is a match zone team under Steele. Some teams combine them at times or use matchup for specific coverage packages only, like Cover 4.

One of the easiest ways to discern zone vs man coverage is to watch the linebackers. If they immediately backpedal or slide on the snap its probably going to be zone underneath. They'll always keep an eye on the QB and an eye on a receiver coming near them. Man coverage has them quickly pressing up and jamming receivers and they can't watch the QB.

The first thing to teach in zone is how to drop. There are two choices: backpedal or slide step. We're more proponents of sliding for linebackers and pedaling for outside defenders and DBs, but there are times where a defender has to be able to do either.

Whether you're in match or spot-drop, both of these can apply. If we play matchup zone, he looks for the closest receiver and picks him up in man/man coverage until the receiver leaves his zone area and if there is another defender near him to "pass off" the receiver to. In matchup, you don't defend empty space. If I play a spot-drop zone, the linebacker reaches his destination and pulls up when the QB stops his drop (5-7 step drops = longer pass patterns). He gets square to the LOS and watches the QB and the closest receiver and reacts to the throw. After that you'll see him drift around his zone and possibly out of it, which he isn't supposed to do unless there are specific circumstances. In spot-drop you may sometimes end up defending no one at all.

There are a few common-sense situations where you can drift. One is on 3rd & long, where the usual drop is taken and then the underneath coverage slowly backpedals. Another is when there is little time on the clock and the opponent has to score, the QB doesn't want the underneath routes and the LB continues his backpedal. There are also situations where the offense uses a hi-lo concept to sandwich the LB zones with a route underneath and a deeper (e.g., a Dig or a Post) route behind him. The defense would always rather force the short throw and give a completion rather than a deep pass.

The last situation is not exactly drifting but looks like it. If the QB rolls out, the defenders should take their drop and then shuffle laterally, keeping the same distance from each other as they normally would without going into a no-cover zone.

We've explained Cover 3 Zone before and discussed the matchup vs spot zone here. We'll talk about some of the specific jobs of the LBs in the underneath zones in terms of spot zones next. 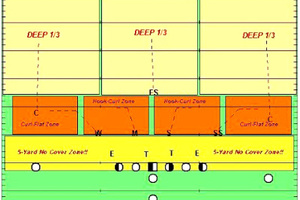 No cover zones - There are 5 yard no cover zones along the boundary and within 5 yds of the LOS. Zone defense gives up this short area and defenders aren't supposed to be in them unless reacting to a throw. Likewise we use the sideline as an extra defender.

Flat - Stays inside the alignment of #1 receiver to that side but stays outside everyone else, so any receiver that comes toward the sideline must not get wider than the flat defender is playing. As we defined before, it means he can't let anyone cross his face without breaking on the route. His aiming point in his drop is 10 yards deep in the seam and anyone that comes nearby should be rerouted by force. The man playing the flat or curl/flat area is generally the guy with the toughest assignment because of the amount of yards he must cover.

When the flat defender, in our case the OLB, reads a pass key, he drops at 45 degrees to about 12 yards depth and 2 yards to the inside of where #1 receiver (widest WR) was standing. He doesn't go into the no-cover zone. He intentionally doesn't go all the way to the flat area because he has to give time for the inside LB to widen to the curl area.

His job is to look at #1/2 receiver now and if #2 crosses his face, he goes to him and picks him up. This is the 2nd man through the zone concept. The only time he doesn't have to pick him up is when the coach schemes it and instructs him to squeeze the curl longer. If they don't have a threatening receiver as #2 or they need to complete passes over the middle, you can squeeze the curl.

Hook/Curl - Original drop inside the #2/3 receiver, and must never let someone go up the seam undefended. Based on the release of the #2 receiver, he stays on the inside edge of the numbers. If he's on a TE, he must get his hand on him. Exactly what he does to him depends on whether the TE starts outside or inside from the LOS. If he goes outside, the defender drops 10 yards and immediately looks for a Smash pattern.

When a LB (usually inside LB) defends this zone, he looks for the hook first, which will be about 10-12 yards upfield from the TE. He then expands his width for the curl route TEs like to run. In spot drop mode he does not go vertical with the receivers unless he is the 2nd man to come through his zone area. All he has to do is widen and deflect to protect the seam.

If #2/3 goes to the flat, he does not go with them. He widens just a bit more and looks for the #1 receiver coming behind him. He may now be in open space against a WR, which is bad news. Against zones, offenses tell receivers to look for open spots and sit there. If the WR notices you are coming to him, he keeps moving until he finds a hole to stop in. This is not easy for a LB to adjust to -- he's never going to be as flexible and elusive as that WR. All he can do is anticipate and maintain his ability to change direction via film study and realize that he must be physical until the ball is thrown.

If he has Force responsibilities, his H/C zone can be shrunk to just cover the area closer to the LOS and he never gets width to cover the curl area. That would mean the coverage is rolled behind him to help him out (like 1/4-1/4-1/2 with the quarters behind him) or its Cover 2 Zone where you have 5 underneath defenders. One will be a Force player and another will take the curl.