We continue to compare Clemson's operating revenues/expenses to other athletic departments across the Southeast. Today we will focus on how Clemson stacks up to universities in the Southeastern Conference. Again, we understand that you cannot solve core problems by simply throwing money at them. Cash outlays, however, can be used to upgrade facilities, establish better coaches/support staffs, provide more student athlete support, etc...

I will go ahead and tell you that some of the graphs are a little busy due to the large number of teams' data we examined. Also, no data for Vanderbilt was available. All data shown throughout this article was acquired through www.usatoday.com. Here is the disclaimer they give to better explain how source data was attained.

If you have not already examined Clemson's expenses and revenues from the 2004-2005 academic session to 2009-2010, I highly recommend heading over to our comparison of Clemson and ACC universities. This will show all of CU's data as well as how it stacks up to others in the ACC.

In case you were wondering, in-state rival South Carolina's average budget came i at $62.9 million or 31% more than CU's average annual spending. We point out, however, that some schools (like UGA) count all contributions from their booster organizations as revenue in the AD budget, so they would with expenses as well. Clemson does not count all of IPTAY contributions in revenue. 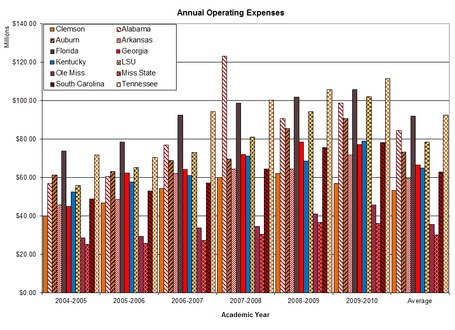 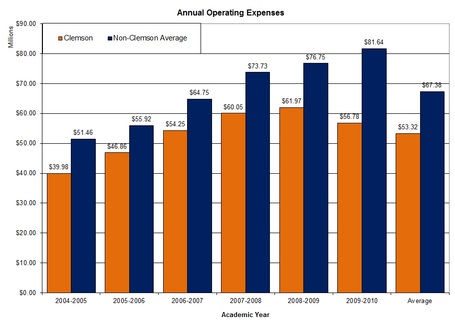 Table II and Figure 3 better illustrate how Clemson stacks up against the highest spenders, lowest spenders, and league average. Here, we found the difference between Clemson and the min, max and average by subtracting the min, max, and average from CU's annual expenses. Clemson's smallest delta compared to the top spending team(s) in the SEC occurred during the first couple years of this survey. This ∆ between Clemson and the max spiked to $63.3 million in '07-'08 and averaged just under $40 million annually.

The largest difference between Clem and the average was $24.9 million in the final year of the survey. Previous academic years showed a negative delta range of around $9 million to $14.8 million. On average, Clemson averaged just over a $14 million deficit compared to the SEC average.

Clemson annually spent more capital than the minimal (Miss State in each year). Clemson's spending excess over the Bulldogs ranged from $14.7 mil to $29.6 mil during this survey period. On average, Clemson spent almost $23 million more than the lowest spending SEC athletics department. 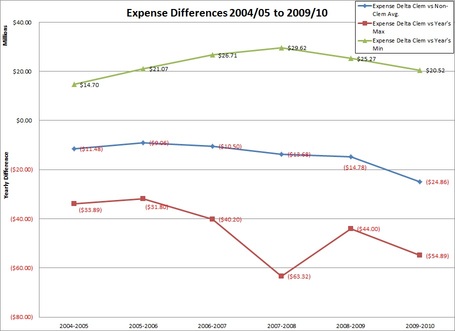 Revenue data is shown in Table III and Figures 4 and 5 below. Like the expenditures, Clemson was well behind the majority of its SEC counterparts in revenue generation. CU averaged just over $53.5 million in annual revenues. This figure was approximately $18.2 million less than the yearly average of the schools examined. Florida, Tennessee, and Alabama again were the leaders in revenue generation at $98.2, $93.7, and $95.4 million, respectively. Clemson was able to bring in more revenue than only two schools in our survey, Mississippi and Mississippi State. USC averaged over $10 million in revenue more than Clemson on average (mostly from SEC TV deals, and cashing in on bonds for the baseball stadium). 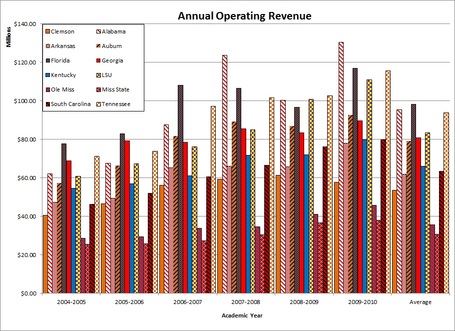 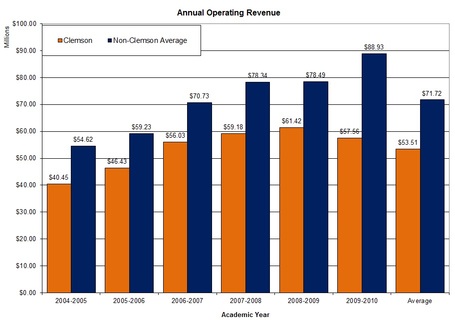 We looked at Clemson's revenue generation compared to the yearly min, max, and average in Table IV and Figure 6 below. Compared to the average, CU lagged behind by approximately $12.8 to $31.4 million per year. Clemson was behind the league maximum by $36.4 to $73 million over this time period. The average lag between Clemson and the SEC max is over $44.7 per season. Clemson was able to cover the league's minimal revenue generating schools by $14.9 to $28.7 million here and averaged bringing in $22.8 million more than the minimal. 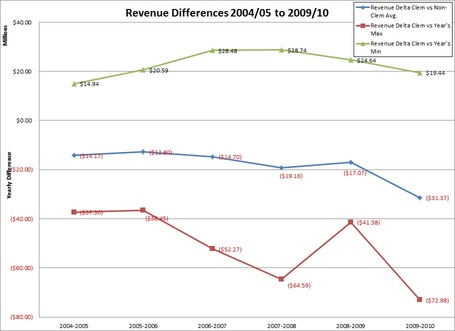 We wanted to show the expenses and revenue deltas on a common chart to show where Clemson stands when the two are combined. To assure you have perspective, a balanced budget occurs when Revenues equal Expenses. If revenue is greater than expenses, there is a surplus and if revenue is less than expenses you have a deficit. The layover of these items can be seen in Figure 7. 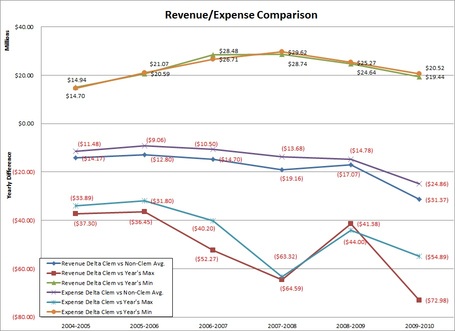 Profit is defined as the difference between revenue and expenses. While I like to look at profits to give you a feel for revenues vs. expenses, I caution you to realize that this is a university's sports program and not a private entity.

Table V and Figures 8, 9, and 10 show yearly profits as well as cumulative profits from '04 to '10 for each of the schools and the non-Clemson average. Items that I was interested in were Alabama's $64.3 million in profit and, the even more impressive $86.1 million Georgia pulled in profits. All schools shown sans Clemson, South Carolina, Ole Miss, and Miss State averaged well over $4.5 million in profits per academic year. Somehow, Ole Miss was able to spend every dime it brought in without running a deficit in each year of this survey. Clemson's $1.17 million surplus is nearly $25 million below the SEC average profit per team per year of $26.1 million. We point out again that if you include IPTAY profit (see link at bottom of this page), then we do bring in more cash than is shown here. 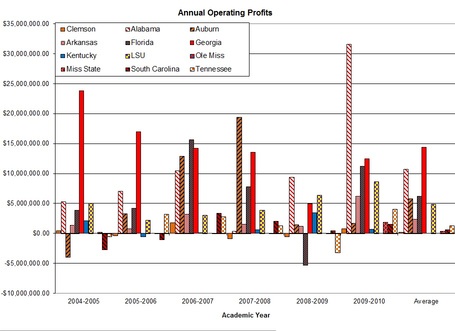 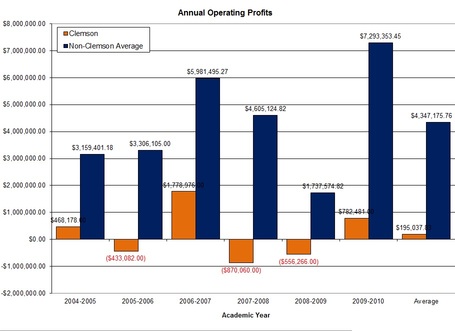 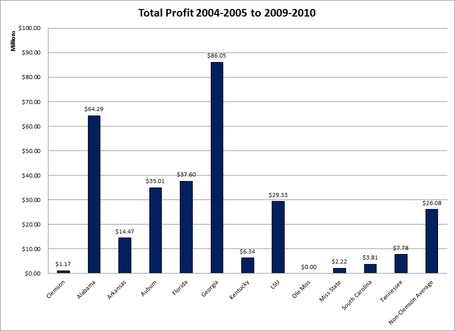 Clemson was pretty much dominated in all the financial areas we examined today. Per items shown here, most of these schools (Alabama and Georgia in the profitability area and Bama/Florida/Tenn in raising and spending money) appear to be printing money through their athletics department. By generating large amounts of revenue, these schools are able to plow more capital into their sports programs to assure that their student athletes have the best of everything.

We understand the obstacles that Clemson must overcome compared to the schools mentioned above, particularly because of capital injections the others receive through media deals. To counter these obstacles, Clemson simply must find better methods of revenue generation. I don't think it is feasible to catch the Alabama's of the world simply because their alumni-base is much larger than Clemson's and their overall fan-base is extremely rabid. I think Bamafan would probably rather give his last dollar to the Capstone than eat, and that is just how it is in T-Town. The Tigers have, however, missed out on key opportunities to promote the baseball/basketball programs, create better business alliances, and build the Clemson brand into more of a revenue generating machine.

As we have said before and will repeat here, if we want to build nicer facilities, fund coaching/support staffs, and better expand the Clemson brand, we need to bring in more capital. We have discussed our displeasure with marketing attempts and a lack of effort by the university to pimp a good baseball program and an excellent facility in Beautiful Tiger Field. Clemson also has a relative lack of interest/fan support for a basketball program that is leaps and bounds better than it was 5-10 years ago. Clemson has to do better than they are doing now to get people out to baseball/basketball games and generate more fan support and overall revenue. We showcased this article a year ago to emphasize the marketing deficiencies within the athletics department and we have been clamoring for an improved marketing staff, more partnerships with outside companies, and an emphasis on better showcasing our baseball and basketball programs.

Just a reminder...we conducted reviews on similar topics in the past, comparing Clemson to UGa and Alabama from '07 to ‘08. We also put together an in-depth review of the Clemson IPTAY and athletic department budgets for 2010. The latter link provides line by line analysis of these budgets and is a good place to look if you want to know more specifics on financial topics. As we have said before, there are minor differences in these numbers but Clemson's figures in the links above were provided directly from Katie Hill in our AD and IPTAY reports and we consider them the hollowed documents and completely correct because they came directly from Clemson.