Share All sharing options for: Linebacker Recruiting Analysis: Clemson vs. non-ACC 2006 to Present

In our final installment of linebacker recruiting we compare Clemson to some non-ACC universities.  Assumptions made in creating this article can be found here.  I should point out that we strictly used www.scout.com position classifications.  It is possible that some players ended up at a different position ball after they arrived on campus for any of the schools in this article.

Table I and Figure 1 (below) both illustrate Clemson's ranking based on LB class size since 2006.  Clemson (at 2.67 players per class) was tied with Georgia and LSU for least number of linebacker recruits over this time period.  South Florida and Auburn led the survey averaging 3.33 linebackers per class.

The items that stood out the most were Alabama's relative consistency (3 per year) as well as South Carolina's two big classes ('06 with five and '09 with six).  After pulling Kevin Steele away from Bama, Clemson increased its annual LB haul bringing in nine backers the past two classes.  Overall, the Tigers lag the average by 0.30 players per class and will need to get this average up to at least three players per class. 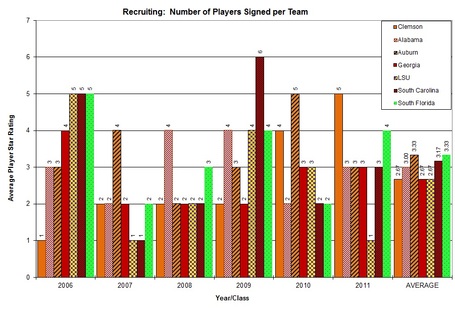 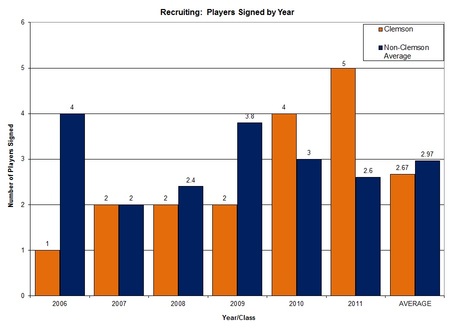 Table II and Figure 3 show the average star-rating per player for each team, as shown below.  Clemson (3.12 stars/player) trailed everyone else except South Florida in this category.  I will say that the SEC teams we have included in this article did a great job pulling in linebacker talent from 2006 to present. 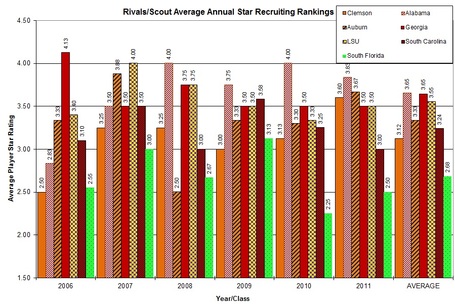 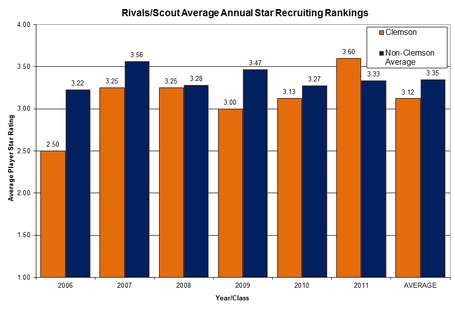 Clemson was covered up by the SEC schools recruiting linebackers.  The Tigers brought in fewer backers than the average and less highly ranked players.  As we stated here before, a philosophical defensive adjustment for Clemson saw the Tigers dramatically increase priority in linebacker recruiting.  With our current defensive scheme, Clemson needs to get its 3-5 year rolling average around three linebackers per class.