We’ve discussed the first basic fundamentals for linebacker play in the hit & shed, pursuit, and tackling articles, and now the last two fundamentals are pass coverage. Note that while I’ve written these with linebacker play in mind, the basics apply to all positions at all levels. Some coaches will start out by teaching zone basics and then go up to matchup zone, but since FF and I believe so strongly that man/man coverage is the most primary and intuitive form of pass coverage we’ll start with M2M here and cover match zone again with some thoughts on the spot-drop zone we used to run here in the next article.

Much of Clemson’s problems in pass coverage last year were common problems for all M2M coverage teams when they don’t have shutdown players at all positions in the defensive backfield. When a coordinator picks a certain defensive style, and/or prepares his game plan for the week, he makes a trade off somewhere in the scheme.  If he believes he can cover your receivers deep no matter what, he can press coverage and dare the offense to go deep. If he’s afraid of your ability to hit deep passes, he may back up the coverage and give you everything underneath. Every defensive scheme has them; it may just be that you need superior talent to take advantage of the weakness. As Nick Saban says, "if you will take what the defense is giving you, they’ll eventually give you the game."

There are also the problems compared to zone schemes, as we (and most M2M defenses) saw last season:

The disadvantages should make it apparent to the reader that an intelligent player is required at the safety position(s) for M2M teams to really be successful every week. He is the only one that is always reading and reacting to the QB’s movements.

So what do we do with a LB who isn’t so great in M2M coverage by himself? We usually want to give him a short zone underneath the FS in Cover 1 so that he doesn’t get matched up with a quicker player in coverage too often. This is the idea behind Robber coverage, which we’ve discussed before here.  It is designed to take away the middle pass zones, both the underneath and deep middle. As the article there discusses, a Robber’s job is to help the underneath defenders with short routes and force the QB to hit a precise throw between himself and the FS on deeper patterns. The added advantage is against scrambling QBs because the Robber is a "spy" in such cases. It is possible to play Robber coverages with 2 safeties deep, but doing so with a linebacker is not always the smartest thing to try because of his limited range compared to another defensive back. Teams that play 2 Robber usually drop 2 Cornerbacks into deep coverage and bring the FS down underneath them with all LBs in M2M, like Virginia Tech. 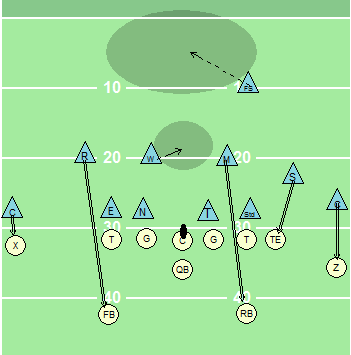 Cover 1 Robber example out of an Even front 4-3. 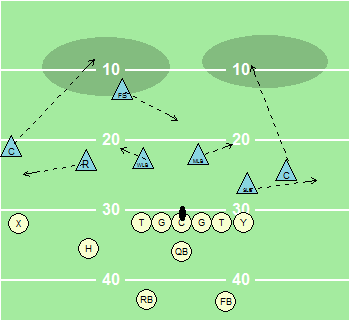 An example of Cover 2 Robber.

If the LB has good technique in M2M but isn’t fast, you can get away with giving him responsibilities on the boundary side of the field instead of playing Robber coverage. There he can use the sideline as his help.

For the basics in jamming, using the backpedal and slide step, this previous article applies again. Some other fundamentals are:

After that, there are three basic types of patterns that the linebacker has to prepare for in man coverage: inside, vertical/seam, and outside patterns. A small point of emphasis is reading the split of the receiver. When a TE or WR widens his split from the OT, he may be going outside. If he’s going inside, he wants to get inside you and will tighten his split.

Inside pass routes are the easiest for the QB to hit. The priority here for the LB defending the middle of the field is to deny them. A LB will be using an inside technique on nearly every receiver he faces that is split out. For a LB on a TE, he may use an outside technique alignment. Those statements are true whether it is zone or M2M most of the time.

On the snap he reads his key, if it is a run key he defends his usual gap. If it is a pass key he engages the receiver from the inside. He must come up and make contact with the receiver’s chest with his own outside hand, while planting his outside foot, and keep him from breaking inside as best he can without a penalty. This is called a "wall-off" technique. Man coverages go with pressure fronts and blitzes, and so we do not want the QB to be able to hit the quick slant or drag route before the pressure gets there. 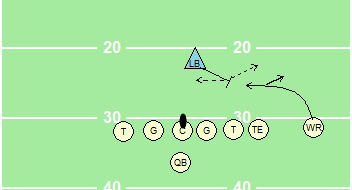 Once contact is made, he keeps his body to the inside of the receiver to make any inside breaking route difficult to hit.

Seams in a defense are weak spots, not necessarily the hash marks on the field. Every defensive coverage has a seam. For a Cover 2 Zone team, the seam is right down the middle between the safeties and behind the MIKE, along with the deep region near the boundary behind the CBs. Cover 1 eliminates the seam in the middle but gives up more down the sideline behind the CBs in terms of safety. A seam route in the sense of M2M coverage just means vertical routes – sail, fly, deep post/corner, etc. Vertical routes must be played the most aggressively by the linebackers. If he is matched on a TE or most RBs he should be able to keep up with him, but speedy slot receivers will outrun most linebackers.

To cover a vertical route he must insert his body into the seam and keep it there. He must jam the receiver as he goes vertical and deflect him to the outside. The idea must be to force the QB to make a throw over his head and to the outside shoulder of the receiver and never get turned around so that the WR/TE/RB can break inside. If he is beaten, then he must remember his job is to make the tackle, and not to flail his arms recklessly in trying to break up a pass. Some specifics now apply to the particular coverage called.

Robber will have one LB as a short zone defender and a FS playing deep. Which LB ends up as the "robber" depends on who comes out in the pass pattern. It can be any of the linebackers and occasionally it is the SS, this makes it easier to disguise and confuses the QB. If the OLB is matched with a RB or TE, he has help inside his position and over his inside shoulder. As you should be able to tell by now, the weakness of Robber is outside breaking routes by those slot receivers.

Outside breaking routes are the hardest to defend. Recall the LB is usually aligned with inside technique. The flexed TE or RB releases and cuts outside on a quick out or an arrow route, for example. Now how can you defend it? There are two ways.

-- Stay to the inside and insert your body between the QB and the receiver. Jam him and then pursue inside-out. Long outside throws are hard to hit: they need to be perfectly placed and a QB with poor accuracy and poor arm strength won’t hit them at all.

-- Backpedal to get behind the receiver as he breaks outside and stay close. Attack from the inside-out with depth.

I think #1 works best for a slow linebacker, particularly if it’s a quick pass or if there is C2 behind you. If your helmet is in the throwing lane the QB will hesitate to throw, even if there is separation. You must simply remember to never turn your head to look at the QB. Backpedaling to get behind the receiver and playing from depth would be easier for a DB. It depends on what you have recruited here.

The converse argument would be if the RB breaks outside and turns up, like in a wheel route. If you are playing under him and he gets separation to turn upfield, you will have little chance of catching a fast guy. Hopefully you would be in C2 with help behind you if that is what the offense likes to do.