Today, we compare Clemson's linebacker recruiting endeavors to ACC Coastal foes.  Assumptions made in creating this article can be found here.  I should point out that we strictly used www.scout.com position classifications.  It is possible that some players ended up at a different position ball after they arrived on campus for any of the schools in this article.

Table I and Figure 1 (below) both illustrate Clemson's ranking based on LB class size since 2006.  Clemson (at 2.67 players per class) recruited fewer linebackers than everyone except Virginia Tech and was tied for second fewest with Duke.  North Carolina, the division's leader at 3.67 players per class, brought in one full linebacker more than Clemson on average each year.  Overall, the average ACC Coastal football program brought in over 1/3 a lineman (3.13 per class) more than Clemson did from 2006-present.

Notable items in this category are North Carolina's consistency (bringing in three or four linebackers per class each year), Miami's huge 2008 class of nine (9) LB's followed by large classes in 2010/2011 (nine total players in the combined classes), Georgia Tech's commitment to numbers, and Clemson's nine total linebackers over the past two classes.  Even with Clemson's large '10 and '11 classes, the Tigers have brought in grossly fewer numbers at this position than the guys in the Coastal.. 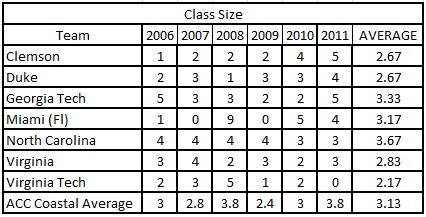 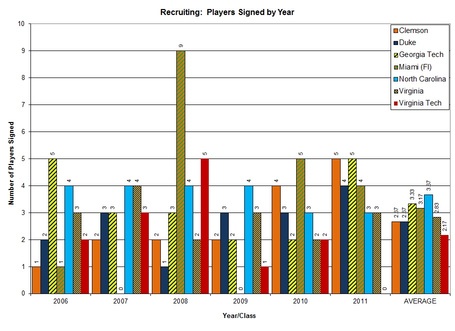 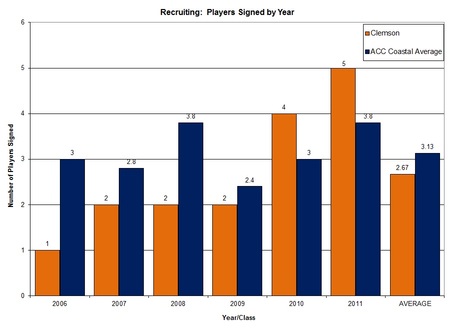 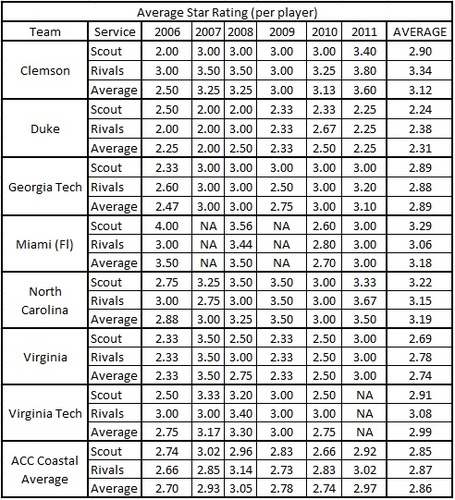 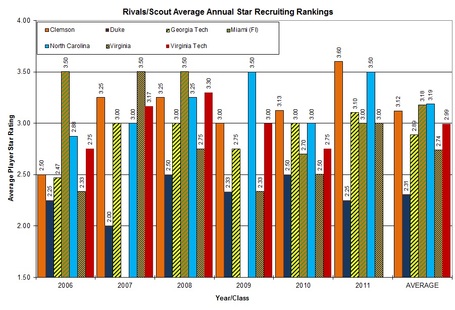 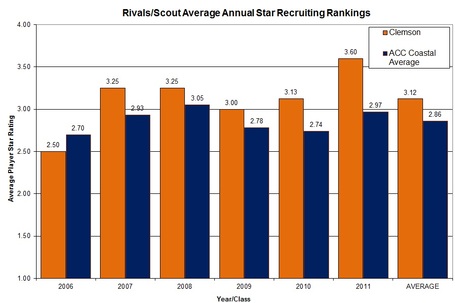 Again, Clemson was overall average when compared to other ACC Coastal teams over the time period examined.  Clemson used very nice 2010 and 2011 classes to keep it respectable.  Clemson still, on the whole, was outrecruited by North Carolina and Miami in both metrics examined here.  Those two teams, along with FSU in the Atlantic, really showed out pulling backers from '06 to present.

While we are definitely excited about the Freshman and Sophomore LB's, we would like to see Clemson maintain higher signing numbers moving forward and really want to see the three year rolling average from class to class remain at or above three linebackers per class.