Today, we compare Clemson's linebacker recruiting endeavors to ACC Atlantic foes.  Assumptions made in creating this article can be found here.  I should point out that we strictly used www.scout.com position classifications.  It is possible that some players ended up at a different position ball after they arrived on campus for any of the schools in this article.

Table I and Figure 1 (below) both illustrate Clemson's ranking based on LB class size since 2006.  Clemson (at 2.67 players per class) recruited fewer linebackers than Wake Forest, FSU, and UMd.  The Tigers recruited more players than NCST and Boston College.  Overall, the average ACC Atlantic football program brought in one-tenth a lineman (2.77 per class) more than Clemson did from 2006-present.

Notable items in this category are Maryland's '09 class (7 LB's) and Clemson's nine total linebackers over the past two classes.  Without the last couple classes, Clemson would have averaged a meager 1.75 linebackers per class. 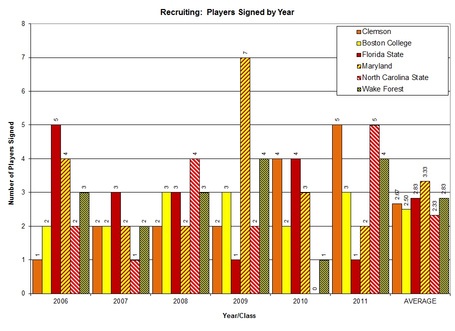 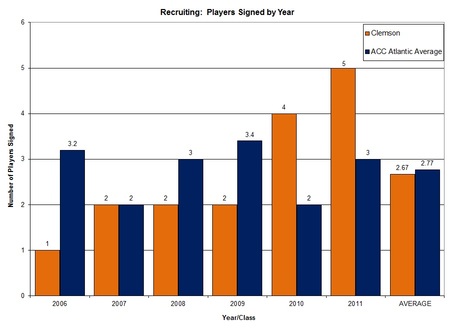 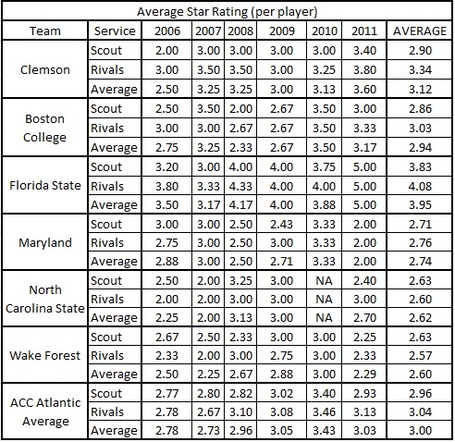 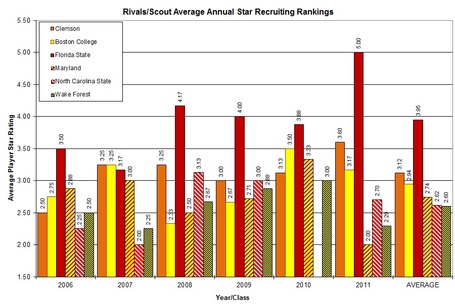 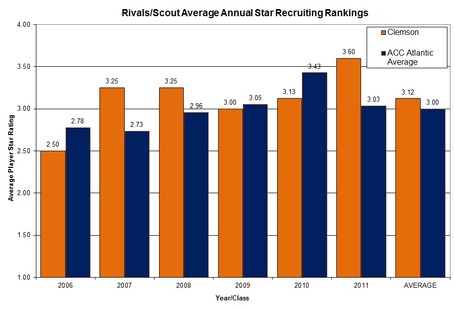 On average (from 2006 to present), Clemson appears to be on-par with their ACC Atlantic counterparts in both class size and star rating per player.   Other than 2006, Clemson's average star rating per player was 3.00 or greater each year of this survey.  Thus, player quality does not really bother us at the linebacker position, particularly when you look at the guys Clemson was able to sign in '10 and '11.  The issue here is class size.  Clemson averaged 1.75 linebackers per class from '06 to '09, causing the Tigers to be extremely thin in this area.  Kevin Steele's hire at Clemson along with the glaring weakness that emerged from meager numbers has obviously changed linebacker recruiting strategy.  We cannot complain about the job that the staff has done the past two years.  Swinney and staff brought in very highly touted linebackers and brought them here in droves.