Table I and Figure 1 (below) both illustrate Clemson's ranking based on OL class size since 2006.  Clemson (at 3.83 players per class) recruited as many or more offensive linemen than any of the Coastal teams sans Virginia.  The Tigers, on average, recruited more players than GT, UNC, and Virginia Tech.  Clemson was equaled in number of linemen signed by Duke and Miami.  Overall, the average ACC Coastal football program brought in nearly ¼ of a lineman (3.60 per class) fewer than Clemson did from 2006-present.  The item that sticks out with these numbers is the eight linemen that the ‘Canes signed in the 2010 recruiting class. 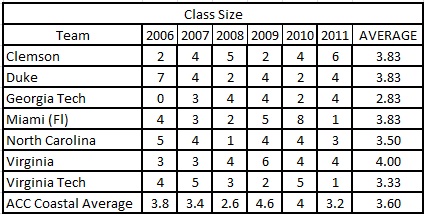 Note that VT, who generally has the better offensive lines in the Coastal over this time period, brought in fewer linemen than Clemson did, yet won more games. Sound like coaching is an issue here? 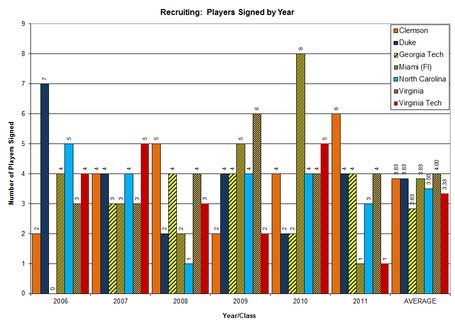 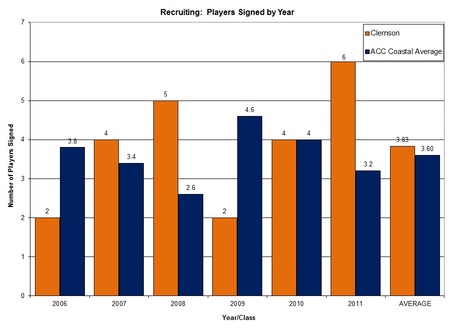 Table II and Figure 3 show the average star-rating per player for each team, as shown below.  Clemson (3.18 stars/player) trailed only Miami (3.24 stars per player) in the avg star rating per class for this division.  North Carolina, at 3.18, tied Clemson in this category.  Virginia Tech and Georgia Tech were the two other Coastal schools averaging over three stars per player from '06 to '10. 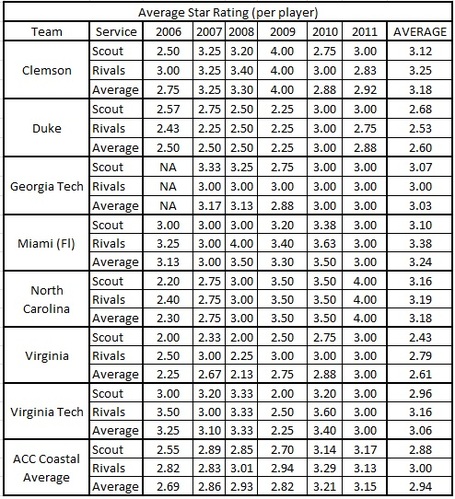 Same issue again. VT brought in fewer numbers and less average talent, yet wins 9-10 per year with it. Only Miami brought in equivalent averaged talent, and their coaching staff just got the axe. Our coaching staff gets raises. I'm so thankful Brad Scott is gone. 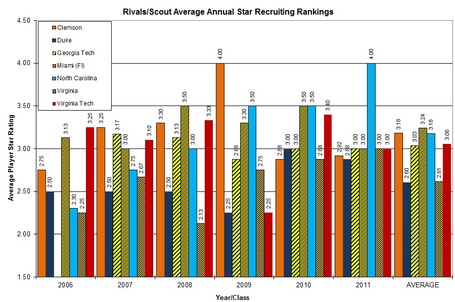 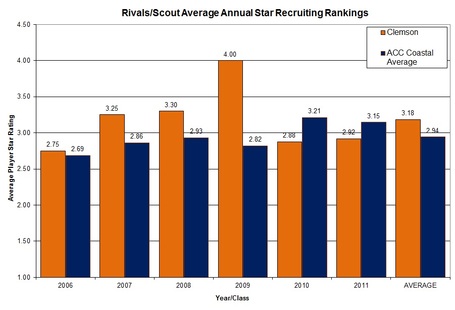 Overall, Clemson appears to be on-par with their ACC-Coastal foes in both number of players signed as well as star rating per player.  Clemson was able to bring in above average player numbers when compared to those in the "other" division. However, we haven't beaten VT. We lost to a one-armed UNC team. We couldn't beat GT most of these years. We handed one on a platter to The U this year. Looks like coaching to us.