Today we will continue to look at Clemson WR recruiting, comparing Clemson's recruiting in this area to others in the ACC Coastal Division.  Please refer to the figures and tables shown below for data regarding this area.  Obviously, we will toss in our commentary where necessary.

Table I and Figure 1 (below) both illustrate Clemson's ranking based on receiver class size since 2006.  Three ACC Coastal schools brought in more receivers than Clemson (16 total) over this time period.  These schools include UNC, UVa, and Va Tech.with 20 receivers a piece.  Duke and Miami both brought in 16 receivers and Georgia Tech, which was transformed into a run-dominant option/flex-bone/wing-t offense under Paul Johnson, brought in only 12 receivers over the past six recruiting classes.  Thus, as shown in Figure 2, Clemson brought in, on average, 2.67 receivers per class compared to the other ACC Atlantic schools' average of 2.8/class.  This number (for Clemson) was drastically increased through the 2011 class to four.

While CU was slightly below the ACC Atlantic average, we feel as though 2-2/3 receivers per class is pretty close to what we should be bringing in at this spot.  This average was deflated by an unusual 2009 class.  We do not expect to see another one-receiver class as long as former Alabama-WR and Clemson WR-coach Dabo Swinney is running the show.  We should also point out that some players brought in as DB's, pure athletes, QB's, and RB's get shifted to this position so we are not surprised to see players not listed as a "WR" recruit catching balls during his career. 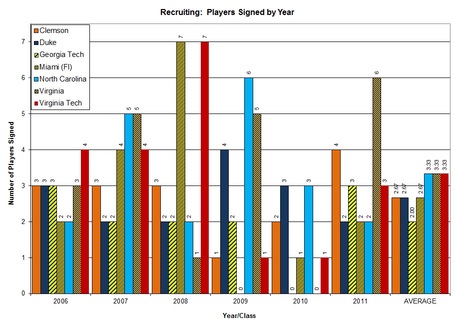 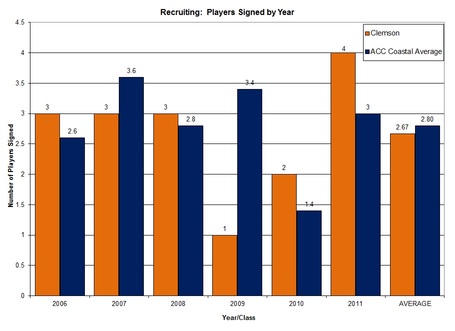 Table II and Figure 3 (below) show the average star rating per player for each Coastal team.  Clemson (3.48 stars/player) led everyone in the Coastal Division in this recruiting metric.  Figure 4 illustrates average stars for other ACC Coastal schools compared to Clemson.  Clemson eclipsed the other Coastal schools, on average, by over 0.6 stars per player.  Hence, we feel as though, from a recruiting day perspective, that Clemson is recruiting quality players in this area compared to its Coastal foes. 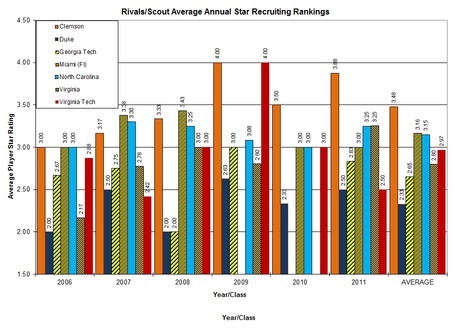 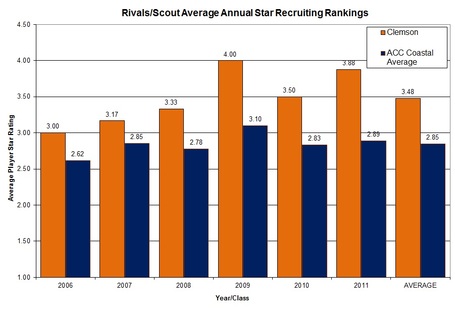 Clemson is clearly well-positioned at the WR position compared to its Atlantic foes.  While others have brought in a few more receivers, Clemson has adequately filled its receiver quota, particularly when you look at the circumstances surrounding the '09 class.  Based on the "experts' high school analysis" (AKA, star-rating), Clemson has recruited better quality talent on an individual basis than any Coastal team.