Share All sharing options for: Clemson RB Recruiting vs ACC Coastal: 2006 to Present

We continue our recruiting analysis by looking at running back recruiting since 2006 compared to the Coastal Division.

We took the position assignments from www.scout.com.  As stated earlier:

In this analysis we are looking solely at players Scout.com labeled as a running back.  I decided after great debate to separate the "running backs" from the fullbacks because each position's function and target athlete is extremely different.  In most modern offenses, a recruited "fullback" will be employed primarily as a blocker.  He will usually not be a sustainable rushing threat and, consequently, will not have large share of a team's carries.  For now, I plan on lumping the fullback and tight end recruiting together.  The TE position creates a similar categorical difficulty because the TE functions as a blocker / passer and sometimes will line up in the backfield.  In case you were wondering about the fullbacks, Clemson has recruited just two designated fullbacks (Chad Diehl and Tyler Shatley) over this time period.

Table I and Figure 1 (below) both illustrate Clemson's ranking based on RB class size since 2006.  Clemson averaged just over one (1) RB signee per recruiting class and did not sign an RB in 2007.  Clemson and Duke signed a low seven running backs over the six year period.  Georgia Tech and Miami led all Coastal Division teams with 12 total signees.  UNC and Virginia each signed nine backs and VT signed ten.  Clemson was well behind the division average in RB's signed per class as you see below, trailing the average by nearly ½ a recruit. 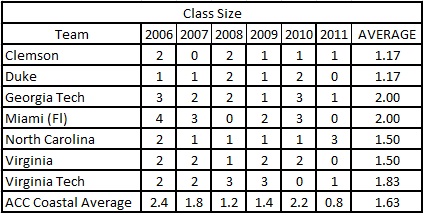 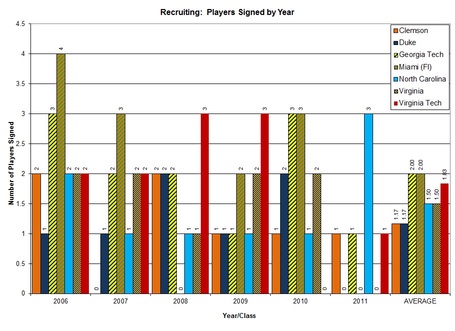 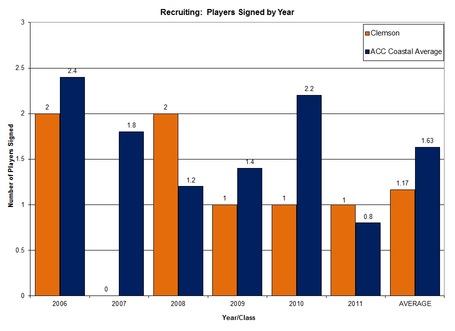 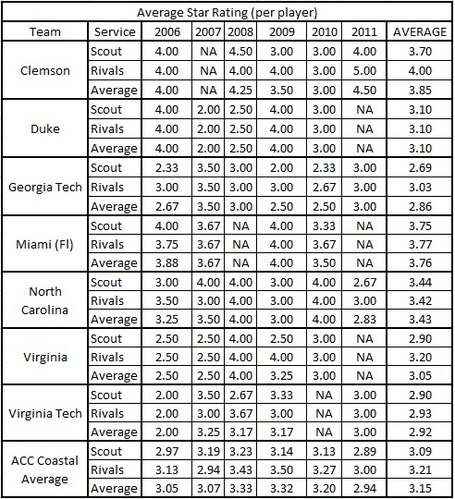 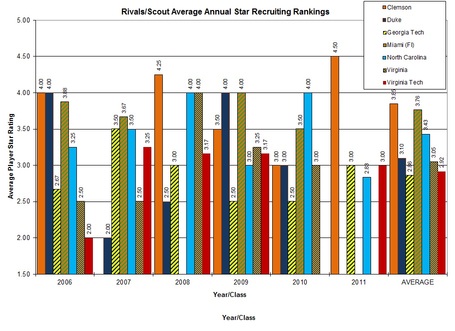 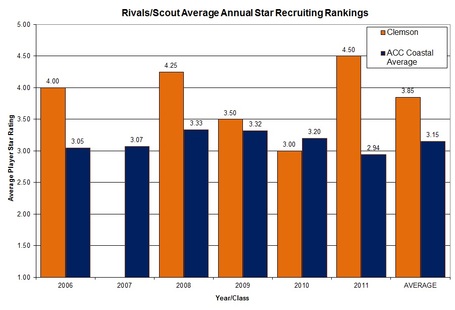 Again, and as stated in a previous analysis, we firmly believe that the running back position is one that requires AT LEAST one newcomer each year due to RB rotations as well as the likelihood of injury here.  Consequently, a respectable stable of running backs should include no less than three capable backs.  Clemson has filled this minimal over the years.  The Tigers' lone signed casualty that I saw was Jo Jo Cox in the '06 class.   The fact that the players that CU brought in at this position were all highly rated really improves its "STS opinion" simply because the staff has maintained a respectable three-deep rotation for years.  Could Clemson recruit another back or two?  Yes.  Has the staff done what it needs in this area, supplementing pure numbers with quality?  Yes.  Clemson has recruited well at the RB position compared to its ACC-Coastal foes.