Common Opponents: WVU faced Miami in Coral Gables in early December, and The U beat them 79-76 after putting a run on the Mountaineers to start the 2nd half, overcoming a 13 point hole. Both teams shot pretty well, but Miami hit 54.5% overall and 50% from the arc, which made up the difference. WVU outrebounded them 37-31, hit 21/24 from the FT line, and had 12 turnovers to Miami's 11, so there was no real edge here except for the shooting percentage, reflecting the defensive effort. The 79 points Miami scored is tied for the 2nd most that WV has given up this year (81 to St Johns). Daryl Bryant had 20 points and Casey Mitchell put up 18 with 7 boards, while playing 39 minutes of the game for the Mountaineers.

The other common opponent was Seton Hall, who WV beat 56-44. WV really manhandled them defensively, allowing just 38% shooting and outrebounding them 48-36 overall.

Clemson defeated both squads, sweeping The U.

How about recently? West Va struggled in the month of February when they got into the real meat of the Big East conference schedule. They lost to Pitt twice, Nova, and Syracuse. However, they did beat Notre Dame 72-58, UConn 65-56 and Lousiville 72-70 all at home within the last month. They lost their Big East Tournament opener to Marquette 67-61.

Looks to me like they had a fair month. Theyre not as talented as these teams and still won their share. Losing to Pitt twice and Syracuse is not something to be ashamed about.

One thing that jumps out at me from this is the turnovers vs defensive rankings. They play good defense but don't really get that many steals or turnovers.

What they do really well is crash the boards, really well (9th nationally in offensive boards). They also apparently like the drive-n-dish with 15 assists per game and such a poor shooting percentage from the arc. So this team has been taught to follow their shots really well.

Bob Huggins has coached the Mountaineers for four years now and has a 100-40 record with West Virginia (690-251 overall with stints at Kansas State, Cincinnati, Akron and Walsh). Huggins has a 26-18 NCAA Tournament record including 14-4 in opening tourney games.

Bob Huggins is the same Bob Huggins, he preaches smothering defense to no end and it shows. He even kept some of Beilein's 1-3-1 when taking over the WVU job, though its much different from his personal defensive philosophies in the past. He's been known to run a 1-1-3 (below) and man/man defense quite a bit.

Anyways, I took a little more closer look at it and the more I looked into it, the more I liked it as a defense to use to change things up. I think in many ways, it's better than the 2-3 zone because it puts more pressure on the opposing team's point guard, who is usually the best or 2nd best player on the other team at the high school level.

Bob Huggins teaching points for his 1-1-3 pressure defense are:

1. Always sprint to help.
2. Stopping the ball is the first priority on and off ball.
3. Put pressure on the ball as much as possible when it is held, dribbled, passed, caught, or shot.
4. The closest man will always take the ball.
5. Sprint to coverage area and break down into defensive closeout position.
6. All five players must rebound.

X1 up top will pressure the point-guard and force him one way with the dribble or to pass the ball. X2 runs the free-throw line extended from sideline to sideline, must be well conditioned. X3 and X4 cover the lane to the corner on each side and double when the ball is entered into the post. X5 should front the post. 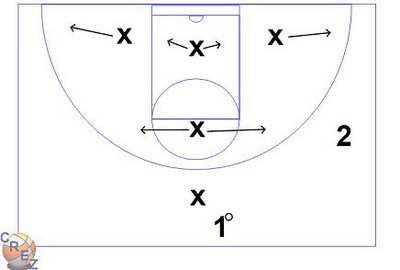 When the pass goes to the wing, X2 must sprint to closeout. X1 drops down to a help position in the case of either a drive, skip pass or return pass to the point. 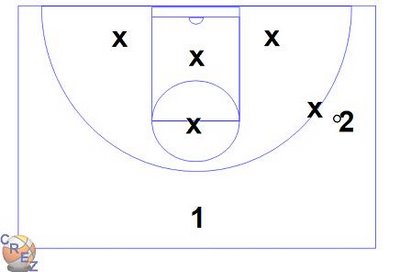 You can also choose to trap the wing, by having X3/X4 step up, this is assuming that they offense does not have a player in the corner.

2 ways to cover this, you can have X2 drop down while X3/X4 jumps out to cover the corner. Or, like in the diagram below, X5 and come around and 3/4 front the post from the baseline (because you have help over the top), while the weakside forward covers the middle. X1 should be at the free-throw line to closeout on either a top of the key pass or skip pass. 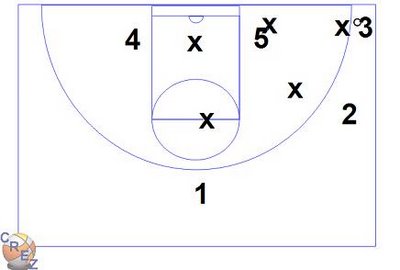 As mentioned, I really like the 1-1-3. Like most zones, it is vulnerable to the 3-point shot. But we weren't a good shooting team that year, so we played right into their hands. I like the pressure aspect as well. In the 2-3, you can extend the 2 guards to pressure a little bit but I think it leaves way too much room at the high-post area. With the 1-1-3, you can have 1 guard extended putting pressure beyond the 3-point line, while the other guard can still cover the high-post area.

Matchup wise, they really mirror ourselves, but they do actually have a shooter we don't. Their front court is not dominantly big but they do crash the boards. 6'8 PF Kevin Jones racks up 35 min/gm and puts up an average of 13ppg and 7.4 boards, but he has produced bigtime against good competition this season at times. He also struggled mightily in January. 6'7 F John Flowers averages 9.6ppg and 6.5 boards.

The backcourt is pretty solid. 2G Casey Mitchell brings in 14ppg and hits 38.2% from downtown. Truck Bryant and Joe Mazzula are also big guards. All are 6'2" and up. This group is the centerpiece of their offense, and account for 46% of the offense.

This is not a team that wants to run with you much, they prefer to make shots and get back and set the D. We're not a running team anymore either, but we can score on these guys in transition. Theyre mostly upperclassmen and they dont turn it over much, but also don't force many themselves. If we're sound and remember to box out and follow shots, the game should come down to the very end, and I expect its gonna be very close.