Share All sharing options for: Moving through Spring Practice...

You all are probably aware of the football related concerns I have moving forward (and touched on here).  I want share some additional thoughts as we get into the meat of Spring Practice.  Chad Morris' offensive philosophy still initiates questions about short yardage situations and whether we have all the pieces to implement his vision.  I do, however, like several core aspects of his offensive philosophy, particularly after seeing footage and hearing news from folks who were on hand to see it in person.

Morris wants to run 85 plays a football game.  To prepare, he wants approx. 10 seconds between plays during practice scrimmage sessions.  This strategy does a couple of things. First, it raises the tempo of practice sessions. We're all for raising the difficulty level of practices here. Second, it causes the offensive players to process information quickly and execute equally as quickly.

The increased practice tempo should improve conditioning.  It should also improve practice organization as the staff will need to script a large portion of each practice period and maintain schedule to meet aforementioned goals.  Morris' strategy also requires better preparation by the players and support coaches to keep up with the pace.  It will place more emphasis on teaching fundamentals through individual group periods.  I would say this could make our practices less physical, but I don't see how our practices could get any less physical than in years past.

Morris uses a series of cards to flash in formations/plays, as does Malzahn. Dabo will not be signaling plays any longer. The players should already be at or near their position(s) when they get the signals from the sidelines.  They immediately get set/motion/realign as needed so that the ball can be snapped quickly. This requires the players to receive, process, and implement lots of information in a little amount of time. Morris adjusts for this information overload by running a relatively simple offense that employs a handful of core plays. The beauty of this whole scheme from a practice to implementation point of view is shown through two basic concepts:  players practice a core group of plays and these plays are engrained into the athletes through repetition.  Thus, the offense will be more demanding in terms of total plays but each player should have a better grasp on the plays.  Here is how I envision improvement occurring: 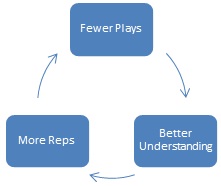 This area is one of the most appealing attributes of Chad Morris. We discussed how disciplined his players were at Tulsa when he took the job in January. We also complained throughout the year about accuracy issues and technical flaws at the QB position. We commented upon his arrival that Morris' Tulsa offense displayed good fundamental discipline and he appears to be more focused on this than his predecessor.  This makes us authors (more) pleased and we hope to see the fruits of this in the fall

"I think he has a chance to be really good," Morris said. "He has a great arm, he has a great release. We are going to get his footwork where I want it. I'm just a technique freak, that's just me. It'll get there."  (Chad Morris on Tajh Boyd and fundamentals in general-LINK)

We do think Tajh has an issue with lowering his arm in live situations on release that needs to be worked on as well. Notice whether his throws sail on him. Footwork (understriding specifically) is a factor in this as well.

Swinney and the Media

We touched on Swinney's new media strategy already.  I really don't care what he does with the media but hope that he realizes less access could increase criticism.  I will say that Swinney needs to evaluate his discussion of the fans with the media.  The man is a football coach and will be viewed by the public first and foremost in terms of wins and losses.  A coach should not be lecturing the fanbase because of something written on a message board or a call to local talk radio.  Swinney should know this better than anyone, being from Alabama.  Forks in Bammer live and die for the Tide but show no mercy on their head football coaches (ask Bill Curry)-they just want to win.  I think Clemson, as a whole, is much more tolerant than many other schools out there but are critical because Dabo was a Tom Bowden holdover.

I never was a real big fan of DeAndre Hopkins joining the basketball team and continue to question this decision.  I am not dogging Hopkins, as he was the best in-state high school b-ball player a year ago and he is competing against great athletes who have been training year-round specifically for basketball season.  I understood the logic behind trying to get him on the hardwood, especially with Clemson's depth woes.  Still, he has not significantly impacted this team during games (cannot comment on practice).  We were excited about him devoting his football offseason to film study and football specific strength and conditioning.  Nuke is already football star who we think could go a long, long way with more offseason football preparation. He had a concussion in practice last week, hopefully this will not impede his development.

We'll be watching to see how key defensive departures affect this defense.  Clemson has a lot to replace up front and in the secondary.  We're also interested in the development of the linebackers.  Maye's departure will have an impact but probably not as much as most fear.  We also have a group of studs coming in this summer.  Steele's scheme, however, can be confusing for the linebackers. Our linebackers did improve in 2010, now we need the veterans to fully understand the system for on-field productivity and to assist the newcomers this summer and throughout the fall. As of now, Steele is giving the most praise to Quan Christian and Tig Willard, two guys we projected would take the lead at LB in our recent position review.

On the topic of linebackers, what is the deal with Justin Parker?  We brushed this topic during the season but "Why in the hell was Parker not redshirted?" Clemson effectively pissed away a year of his eligibility (56 snaps) for reasons that are beyond me. Maybe they anticipated him playing more and it never happened, but there is no excuse for such poor player eligibility management.  Either play him and play him significantly or drop a redshirt on him so that he can use the season as a learning experience-scout team/individual group work-and still have four years of playing eligibility.  This is on the coaches and their assessment of his "readiness" to play at the collegiate level. At least the word from practice is that he has improved some, and supposedly laid out Chad Diehl.

As we repeatedly warn you, don't take too much from Spring Practice and what the coaches report from these practices.  Nonetheless, we will be watching the new position coaches to get a feel how they will coach their players.  Spring is a time for teaching/learning, so that is the extent of our expectations.  We are really excited about Coach Caldwell, so expect us to pay close attention to his efforts to transform the OL into a fundamentally sound group.

The Importance of the Off-Season

We have seen a revolution in the methods athletes use to prepare for sports.  In years past, an athlete generally played football in the fall, basketball in the winter, and baseball/track in the spring.  This was once applicable in the professional ranks, common in college, and the norm in high school.  Now the competition level has increased so much that most athletes simply focus on one sport year-round to maintain a high level of excellence and to simply keep up with their peers.  At the prep level, basketball now has summer leagues and AAU, baseball has summer travel teams/fall leagues, and track indoor/outdoor seasons.  Football is too violent for extra competition but the players now train year-round and participate in Spring drills.

We feel that this training for the gridiron is necessary to keep up with the competition.  We are also advocates of daily film study in addition to mat drills, weight room, and conditioning exercises.  Being a stud individual athlete is great, but not necessarily enough to ensure team success.  Being an exceptional athlete who understands the game and how the team's scheme works is optimal and necessary in today's competitive world.  We have heard reports praising many members of the CU football team's desire to watch film and improve their understanding of Clemson's scheme.

Now for something cool....