As we move deeper into the football offseason, we want to look at several items pertaining to the Clemson football program.  One of these items is recruiting at individual positions in relation to other football teams within the ACC Atlantic, ACC Coastal, and other teams around the Southeast.  This is important because it allows us to make legit comparisons to realize where (on a position-basis) Clemson has done well and where the Tigers have struggled through recruiting strategy and implementation.  As always, this is something new we are rolling out so you will some adjustment as we get better at presenting the data and encourage your ideas on getting this info out.

Today we will compare Clemson's wide receiver recruiting to others within the ACC Atlantic through a series of tables and figures.

Table I and Figure 1 (below) both show how Clemson ranks based on receiver class size since 2006.  Only two ACC Atlantic schools have brought in more receivers than Clemson (16 total) over this time period (FSU and UMd with 18 total over this time period).  NCST brought in 15, Wake 13, and BC 11.  Thus, as shown in Figure 2, Clemson brought in, on average, 2.67 receivers per class compared to the other ACC Atlantic schools' average of 2.5/class.  This number was drastically increased through the 2011 class. 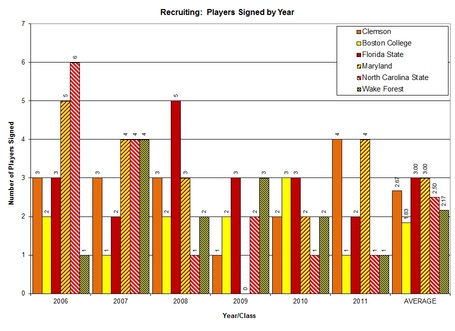 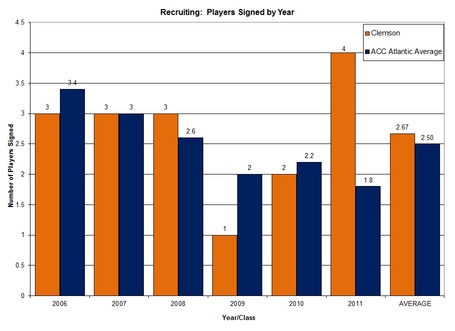 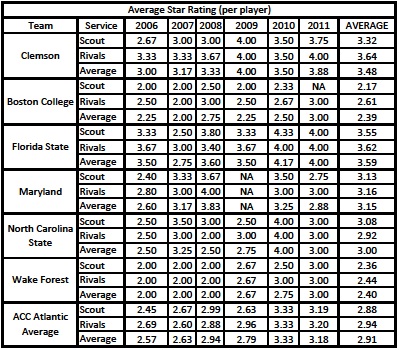 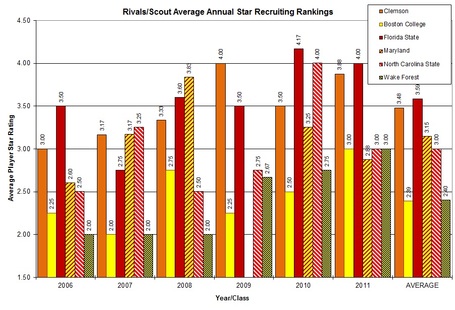 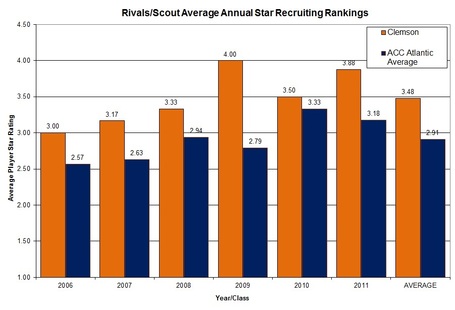 It is apparent that Clemson is more than competitive compared to other Atlantic teams recruiting WR’s.  Only Florida State has clearly out recruited Clemson over the past six classes in this area.  Despite two less recruits and because of the nearly 1/3 star average advantage, I would slot Clemson at #2 here with Maryland coming in third.  According to these metrics, Clemson has recruited well enough to have an above average receiving corps when compared to its Atlantic foes.