Clemson has seen drastic improvement this season out of the wide receivers. Today we'll look at the participation numbers for this group in preparation for the Orange Bowl Wednesday night. All information was attained from www.clemsontigers.com. Again, we only looked at "normal" snaps--with "normal" snaps being all non-special teams snaps taken. We put together a similar article earlier that examined such play through the Boston College game. Also, I decided to include the tight ends in this analysis because these players frequently line up flexed or in a slot-type position. Also, our TE's have been an important part of Clemson's passing attack this season.

Here is how the participation allotment looked based on experience level. Note that we did not take into consideration redshirt status, only allocating numbers to the "class" as listed. 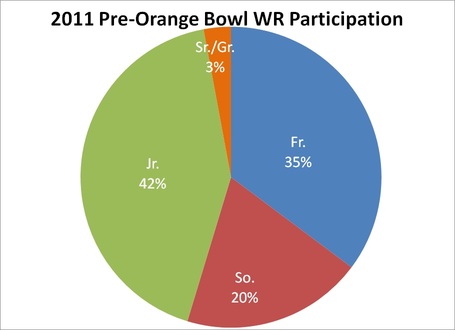 In terms of participation, it should be no surprise that Dwayne Allen (829 snaps) leads the team in snaps, followed by Nuk (694) and Sammy (606). Jaron Brown (582) gave CU a lot of quality snaps as did several freshmen (Humphries, Peake, and Bryant). All in all, as shown via the figure above and raw data after the jump, you'll notice that most of the participation from the WR position will return next season (Jones being the only senior with double digit snaps on the team). We are concerned with Allen's potential departure. As shown through these numbers and via his play all season, Dwayne was a big, big part of this offense and the success they enjoyed in 2011.

Now we'll look at production. There are really no surprises here. Sammy and Nuk combined for over 48% of Clemson's receptions and Allen contributed 16.7% of the receptions. Additionally, Jaron Brown contributed roughly 10% of the team's catches. This mean that these four players were responsible for three quarters of Clemson's pass catches to date. 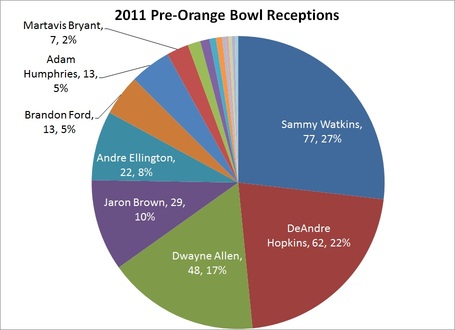 Similar to the reception information, receiving yards were dominated by Allen, Watkins, Hopkins, and Brown. The "Big Four" were responsible for over 80% of CU's reception yardage in 2011. Nuk and Sammy paired up for a ridiculous 55% of Clemson's receiving yards to date. Watkins contributed over 30% of the group's performance, logging 1153 yards through the ACCCG. 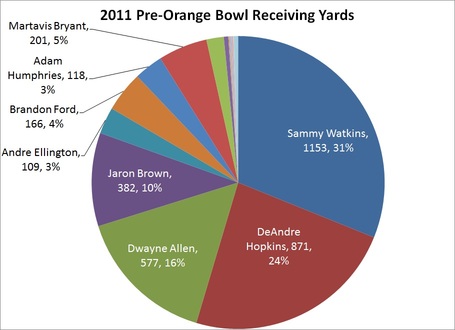 Watkins again led the team with 11 touchdown receptions, or 35% of CU's 31 receiving scores on the season. Allen contributed 8 TDs on the year (25% of team output) while Hopkins and Brown both had 4 TD's through the air (approx. 13% of team total). Clemson had 49 plays of 20 yards or greater through the air to date. Again, Sammy leads the team with 18 (36.7%), followed by Nuk's 12 and Allen's 7. I found it extremely interesting that while Martavis Bryant had merely seven receptions on the season, five of those (or 10% of CU's total) went for over 20 yards.

As with the participation information, Clemson will return a large portion of its production next season and will lose only Dwayne Allen (assuming he foregoes his senior season). If Clemson can get production out of the TE position similar to this season or have one of the younger receivers step up to fill Allen's potential void, Clemson's receiving numbers should again be impressive in 2012.

**NOTE** Statistical tables can be found after the jump.