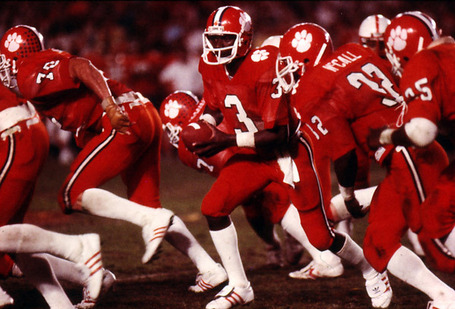 Which Clemson team shows up? I could see Clemson bringing the pain or just getting hammered. Maybe the members of this team that have mailed it in this year will decide to work hard and actually try to win a football game. Maybe the defense will hold Va Tech under 500 yards rushing.

I think too many guys on this team have grown complacent in practice and aren't worried about their PT. I think our last truly tough week of practice was before the last time we played Virginia Tech and I doubt we had a tough one this week, so I don't think we'll match VT on the line of scrimmage. If you don't win the LOS against VT you almost never win the game. Tech is going to blitz McClain, Thomas, and Freeman heavily so the RB will need to be in to block quite a bit. If we can't run the ball to take that pressure off, then its going to be a bad night.

I'm more worried about the confidence of this squad. If we screw up early and VT gets a quick 6, we'll roll over Bowden-style. If we hang in there and VT happens to not play well, I think we can win. I don't really believe we'll shine like we did two months ago.

You can use this thread for the entire day of Championship games.