The linebacker position is one that has been under scrutiny all season. Today we look at participation numbers for the Tigers at this position prior to the '12 Orange Bowl. All statistics were found at www.clemsontigers.com. You'll notice through the tables and figure below that Clemson had a very limited linebacker rotation this season, as only four (4) players logged a reasonably high number of snaps on the year. These players (Hawk, Tig, Christian, and Anthony) accounted for almost 93% of the snaps taken by this group. The good news is that all of these players should return for the 2012 campaign. The bad news is that there is little experience behind these four players.

We discussed our thoughts on Steward and Townsend in a previous article, saying that Townsend definitely should have redshirted and the coaches expected Steward to play early but wasn't ready then was injured halfway through the season. Stephone Anthony came on as the season progressed and will start consistently next season.

The biggest shocker of the group was Parker. JP came to Clemson with big, big expectations that have not panned out to date. He should have redshirted last season and is now halfway through his CU career with very few snaps to his credit. Further, Parker's participation was limited to Troy (4 snaps), Wofford (12 snaps), UNC (7 snaps), SC (6 snaps), and the second Va Tech (4 snaps) contest.

Clemson loses Andres and Memaras through graduation, leaving the Tigers with four experienced players, three highly sought after high school backers, and utility man Spencer Shuey. Clemson should have the talent to be successful as a group next season assuming some of the current freshman players and/or Parker can prove to add quality depth behind the big four.

Below is a class by class breakdown of how this season's snap count has played out. 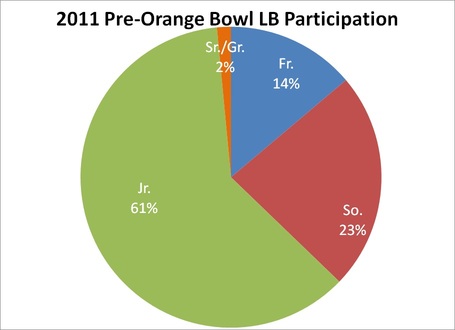