We've discussed participation along the defensive line, now we need to look at who is playing on the offensive front. For this analysis, we look at offensive snaps taken (special teams snaps were not included) by non-tight end offensive linemen. All data were attained from the Clemson Athletics Website. The result was similar to those seen with the defensive linemen in that seniors and graduate students have taken the large majority of the snaps to this point.

Below you'll see the number of offensive snaps taken by each of Clemson's linemen. Notice that all players sans McClain have been redshirted. Also notice that seven (7) linemen have over 100 snaps. Out of those players, five (5) are seniors, one a junior, and one a sophomore. The freshmen (and Matt Sanders) looked to participate largely only when the game was out of hand.

The class by class participation percentage breakdown shows just how dependent this team was on its senior class, which has played in over 63% of the offensive snaps. If you include the 1000 snaps between Freeman and Sanders, you'll note that the juniors and seniors have contributed 83.5% of Clemson's offensive line snaps on the year. 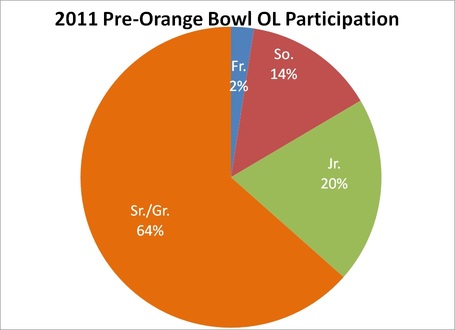 With such a veteran offensive line, Clemson should have been a dominant group up front-flat out shredding it up. That is what veteran offensive lines do. Our Tigers, however, have endured the Brad Scott experiment which, combined with questionable S&C/practice philosophies, has produced a unit that The Chad has described as soft. I am looking for the S&C issue to be addressed this offseason.

All of these numbers show the importance of bowl practice and spring drills for the 2012 offensive line. We desperately need to fill a lot of spots with a lot of players who lack in-game experience. Fortunately, Clemson has a guy in place who is an excellent line coach. We also have an offensive coordinator who is sick and tired of a lot of things, particularly preparation of this group and the lack of a mean streak shown over the past 10 years or so. We are optimistic the combination of Caldwell and Morris can turn this group into a nasty, nasty line.

I am not overly optimistic, however, that they will be complete and ready in 2012. You'll notice that we have a lot of seniors and a lot of freshmen (with Brandon Thomas and Dalton Freeman being the lone sophomore and junior that played this season). This means that there, as you can clearly see above, will be a huge dropoff in game experience following the Orange Bowl. This is a problem that was caused by a poor recruiting strategy, leaving large gaps in experience every couple years. Clemson has to strategically come up with a better method to avoid these massive holes created by graduation.