We get this question all the time: "Will Clemson's defense improve next season?" Well, long and short is defensive success begins up front. I will go ahead and warn you, the participation numbers, as you probably expect, are extremely heavy towards the Seniors and Graduate students. Clemson will need to replace three D-Linemen with over 660 snaps to this point on the season and Kourtnei Brown who contributed with 232 snaps prior to the O-Bowl.

Rennie Moore obviously is excited about the players he leaves behind saying that the defensive line next year will be "ruthless." Uh, ok. In order to be ruthless and relentless, Clemson will need some young bucks to step up and improved play from Goodman. He looks to have lost a step since his freshman campaign and will need to pick that step back up. Big hands alone won't turn you into a beast. We got some good reps this season out of Shatley but really saw relatively little rotation up front in '11. Crawford, Williams, and Jarrett will be expected to step up next season, with Crawford the only of these three to crack the 200 snap mark in '11. We discussed the use (or lack) of Jarrett in 2011 in a previous article. Swinney has repeatedly stated that the rotation on the DL was small in numbers because the younger players simply were not ready to play.

Below are the snap counts for the players expected to return to next season (all stats attained from the Clemson Tigers dot com).

This relative inexperience (four guys with over 100 snaps) still leaves me concerned, particularly when you look at the participation of this year's senior DL class:

So, how do the numbers break down per class? The seniors had many, many more snaps than all players from other classes combined. This group contributed over 60% of the snaps along the DL. There was significant freshman participation (nearly 13%). Tyler Shatley was the sole Sophomore contributor and Goodman the lone junior. 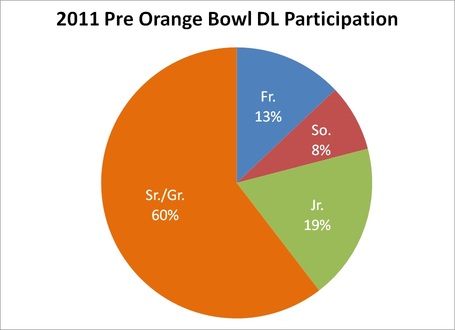