The Tigers travel to Hawaii for Christmas this year for the third annual Diamond Head Classic. The ESPN-owned tournament features an eight team field that will see 12 games played over the course of four days. All 12 games will be televised by ESPNU. 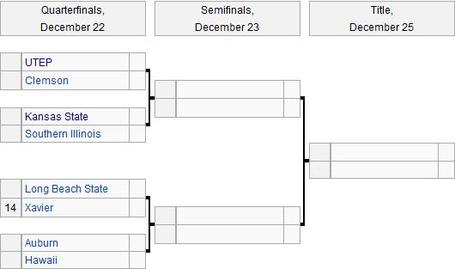 My analysis and prediction after the jump.

Clemson plays UTEP on Thursday at 2:30 and will play either Kansas State or Southern Illinois on Friday. Clemson's final game of the tournament will be played on Christmas day against a team from the other side of the bracket. Host Hawaii is joined by Auburn, Long Beach State, and Xavier on the far side of the bracket. Xavier is the only ranked team in this tournament, and is the favorite to win it, but will have to deal with some key suspensions stemming from the fight the team had with Cincinnati.

How weird is it that Clemson and Long Beach State are in this tournament together? This is the third year in a row that the two schools have been selected to the same in-season tournament. Clemson won both times they played the last two seasons, but it is unlikely that the two teams will meet up again in this year's tournament.

Clemson should be able to handle UTEP in the opening game, but this game is obviously not a guarantee win. After losing to Coastal, Charleston, and Sakerlina at home, nothing is considered a guaranteed win. That being said, Clemson should get the W.

The Miners are a lowly 4-5 on the year, with wins over powerhouses UC Riverside, New Mexico State, Southern, and McNeese State. UTEP is a very young team that has only one senior on the roster. The lone senior, Gabriel McCulley, is listed at 6-7, 225, and could give the Tigers problems outside. He didn't play in the Miners' first four games, and didn't score a single basket in his first action of the year in a loss to Oregon, but he has exploded in his last four games, averaging 16 ppg. Also keep an eye on freshman Julian Washburn and sophomore Michael Perez, the Miners' two leading scorers.

Clemson's second game will be a match-up with either Kansas State or Southern Illinois. Expect for Kansas State to blow out Southern Illinois. Simply put, Southern Illinois is not good. The Salukis sport a 3-5 record that includes a loss to Division II team Ohio Dominican in a game that featured a combined 48 turnovers. Wow. Provided that Clemson is able to beat UTEP, Brownell's club will face off against arguably the toughest team is has faced so far this year in Kansas State.

Kansas State isn't an elite team by any stretch of the imagination, but could possibly end up in the NCAA tournament at the end of the year. They have a 7-1 record, with the lone loss coming in double overtime against West Virginia. The Wildcats, an NCAA tournament team a year ago, lost six players from last year's team, including superstar Jacob Pullen. Head Coach Frank Martin signed seven freshman this off-season, but only Thomas Gipson has had a significant impact thus far this year for the Wildcats.

Gipson (6-7, 275) will create match-up problems on the inside for the Tigers. He leads the Wildcats in both ppg (12.6) and rpg (7.6). Senior Jamar Samuels (12.2 ppg, 6.5 rpg) will probably start alongside Gipson in the frontcourt. Expect for Frank Martin to bring in junior Jordan Henriquez-Roberts off the bench for significant playing time, as his size (he's listed at 6-11) could wreak havoc on the Tigers' frontcourt. Also keep an eye on guards Will Spradling and Rodney McGruder, both of whom average double-digit scoring.

I think Kansas State is definitely the favorite to win the game, and their frontcourt trio of Gipson, Samuels, and Henriquez-Roberts will likely give the Tigers fits, but if Andre Young can shake off his shooting slump and we shoot the ball well from outside, we have a good shot at winning this game.

If we do knock off K-State, the likely opponent in the finals would be Xavier, although some suspensions to some key players could do them in in their first-round game against Long Beach State. The Musketeers started the season with an undefeated 8-0 run, but their annual game against cross-town rival Cincinnati ended with a massive brawl. Xavier's three best players (Tu Holloway, Dez Wells, and Mark Lyons) were given suspensions, and the short-handed Musketeer's fell to Oral Roberts in their most recent game. Holloway is expected to return to the lineup for the Long Beach State game, but Lyons will not suit up until Friday's game, and Wells will miss the entire tournament. How Xavier plays in light of the suspensions is the biggest storyline of the tournament on a national level.

The Tigers could also face off against Auburn, Hawaii, or Long Beach State in their Christmas day game, with Auburn being the most likely opponent. Auburn's resume is similar to Kansas State-a team that sports a great record but has yet to prove its worth. Auburn sports a 7-1 record going into the tournament, with the lone loss coming on the road against Seton Hall.

A realistic goal for the Tigers in this tournament would be a third-place finish. The Tigers should beat UTEP, but would need to play at a very high level to knock off Kansas State. The most likely Christmas Day scenario for the Tigers would be a match-up with Auburn in the 3rdd-place game, but with the uncertainty of the outcome of the Clemson-K-State game, as well as the uncertainty of Xavier's level of play in light of the suspensions, Christmas Day games against Xavier and Long Beach State are also possibilities.

How I think the teams will finish: