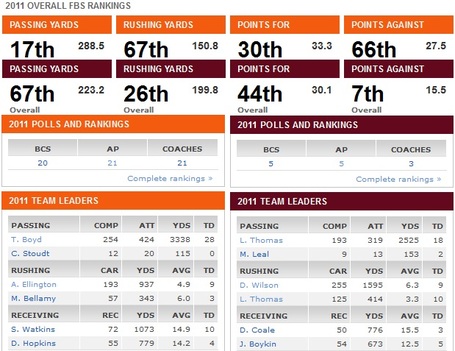 We previewed the first contest, looked at the Va Tech defensive scheme, and talked about the Virginia Tech coaches at length earlier this season and will try not to rehash most of the information shared in those pieces. I do encourage you to read these items to assure you understand the philosophy and minds behind this week's opponent. I'll also say this Va Tech site did a nice job looking at our Tigers earlier in the week.

We expect Clemson will show its base 4-3 with various tweeks based upon game progression and Virginia Tech's looks. Clemson played with eight men in the box a good portion of the first game and we'll probably see more as Clemson has to stop this rushing offense. We suspect Wilson will be used more in this football game than the last and slowing him down will be a major key to this game. Clemson has the ability to cover their receivers in any fashion. This allows Steele to show pretty much whatever he needs here, including man-over/C1. Clemson was able to dominate Tech's offensive line earlier in the year. We have gotten worked here since and must win this battle to keep their rushing game at bay.

VTech will play their hybrid "G" front, mixing a loose C3 look in with matchup zone type coverages underneath. I am sure Bud Foster is more than excited about his defensive front against Clemson's OL. If the last two games are any indication, he'll get pressure with his front four automatically and is guaranteed pressure with blitz packages. Clemson desperately needs to get a running game going early to take pressure off Boyd and the passing game against this defense.

Since the meeting two months ago, Clemson and VPI have taken dramatically different paths that led to the ACCCG. Virginia Tech improved steadily since and looks to be a legit top 5 football program. Clemson climaxed in Blacksburg and has been on a rapid descent since that early-October night. Va Tech has not lost since. Clemson has lost three of the last four--nearly four of the last four--and looks to have regressed as the season progressed.

Quarterback Logan Thomas has been efficient in the passing game all season. Thomas averages over 200 ypg through the air and has an 18/7 TD/INT ratio (see stats below courtesy ESPN). Xavier Brewer did have one of these picks in the regular season contest. Forcing mistakes out of VT through the air then capitalizing on these miscues is critical to Clemson's success level on Saturday night.

The other impressive item Va Tech features through the passing game is the guys catching these passes. Four players have 25 or more catches and 333 yards or more in receiving yards. Three receivers have TD passes 60 or more yards in length and a fourth player a 49 yard TD grab. These statistics show Thomas' ability to spread the football around and his receivers' big play capability. Clemson was able to mitigate the passing game in the first appearance through good coverage and even better play up front. Stats below again courtesy ESPN.

The final aspect of this offense is the piece that really keeps this machine moving. Virginia Tech has done a fantastic job reloading at the running back position and that is clearly the case this season. Their continuance of a very successful running game begins with the offensive line that is aggressive/fundamentally sound and ends with talented offensive backs who rack up yards and touchdowns in a serious fashion (once more, statistics are shown below courtesy ESPN). David Wilson has been jam up all season, ripping opponents apart to the tune of nearly 1600 yards and over six yards per carry. Logan Thomas is also a quarterback who can get loose and cause trouble for the Clemson defense. Taking into account the soft and poor fundamental play by our defensive front and the success opposing quarterbacks had this season, these statistics look troubling for a confused and unsound Clemson defense.

As the schedule shows below (courtesy SBNation), Va Tech scored 30 or more points five games since the Clemson game and 24 or more 6 of the last 7. The Hokies were impressive in most of the games since Clemson but did have two qty three point wins (UNC and Miami) and a four point victory at Duke. Va Tech's massacre of in-state rival Virginia last week was very impressive and I'll say that VTech took advantage of Georgia Tech's mistakes/stupidity to pull away impressively several Thursdays ago. While this team isn't necessarily invincible (as proven by Clemson, ECU, Miami, UNC, and Duke), they have been very impressive in most wins and boast a premier 11-1 record.

I should point out that their schedule is week, particularly in out of conference. I would like to have seen this team play a legit BCS squad and/or Florida State this season to get a better feel for where this team really stacks up outside of the ACC Atlantic.