We were curious regarding the participation distribution based on class. Hence, we have taken all "regular snaps" (snaps taken on offense or defense but not on special teams) and looked at the numbers. We also did not take into account redshirt status. Hence, if a player is a redshirt freshman, we classify him as simply a Freshman. Graduate students are classified as Seniors (with the notable exception of Rashard Hall who we classified as a Junior because he still has another year of eligibility despite already being in graduate school). All information was obtained from the Clemson University athletic website, www.clemsontigers.com.

The results were about what is to be expected and the raw data is shown below. Roughly 2/3 of snaps this season were taken by juniors and seniors. Freshmen accounted for over 15% of the snaps and sophomores almost 18% of the overall snaps. The majority of the offensive/defensive line snaps were taken by upperclassmen. The receivers and QB slots were largely occupied by some of the young bucks. Andre Ellington was a junior who saw the majority of the snaps as the feature back. 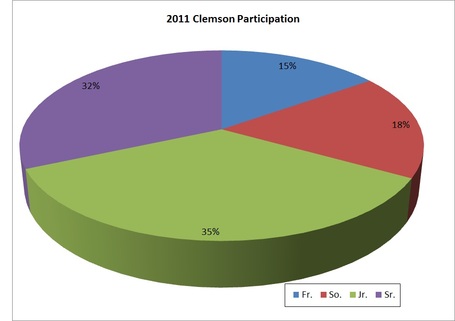 Overall, 23 players had over 400 snaps on the season. These numbers can be seen in the table below. The snap breakdown should show few surprises. We were extremely thin on the offensive line so it is understandable that our starting center and tackle led the team in total snaps. Tajh Boyd was used almost exclusively over the course of the season as Cole Stoudt received little playing time during critical situations sans the Boston College game. Price, Allen, Thomas, and McClain each logged over 700 snaps as members of the offensive line / Tight End. Sensabaugh and Hall both played a tremendous amount in the defensive backfield. What makes these numbers impressive is that Hall played injured for the majority of the season and still racked up 714 snaps heading into the Orange Bowl.

As we've said all season, 2012 will require Clemson to replace a large number of offensive and defensive linemen who accounted for a very large portion of the teams' snaps. Fortunately, Clemson returns most of its offensive skills players who accounted for a ton of playing time this season. This includes quarterback Tajh Boyd (928 snaps), Andre Ellington and Nuk Hopkins (each with 694 snaps to date), and-of course-freshman phenom Sammy Watkins-606 total offensive plays in 2011.