Share All sharing options for: Who's Playing: True Freshmen

There are always questions regarding a whether a player should be redshirted or should come in and immediately play for Clemson's football team. We want to look at participation numbers to try and determine which playing decisions for the young team members was appropriate and which players should have been subjected to a full redshirt season.

It is our opinion that to make a guy's freshman season worthwhile, and not hamper him later, that he should get a certain number of snaps over the season. If he doesn't, then he should've been redshirted. The year of development and adjustment to living in college is a good thing for freshmen. They can get their academic situation worked out and learn to manage their time between practice and workouts and class. Many need the year of physical development in a real S&C program, either to gain or lose weight. Generally if a player's snap count isn't over 200 over a season, we don't feel that its worthwhile to play him. For reference, starters generally push for 550-700 snaps.

All statistics presented below were obtained from the official Clemson University Athletic Website. We only included non-special steam snaps taken in this analysis, so these players could have attained experience as members of special teams units over the course of the football season. As a recap, below are the players who signed with Clemson last February.

Obviously, not all of these players are currently on the Clemson roster. Dodd and Battle spent this past season at Fork Union, so they could not play this season for the Tigers and, thus, will not be mentioned further. They both plan to enroll in January.

Below are the true freshman participation numbers for the 2011 season. This table shows the cumulative number of plays each player participated in over the course of the 2011 season. Again, these do not include special teams snaps so keep that in mind as we move through this analysis.

We all are fully aware of Sammy Watkins' contributions this season and no one will argue that he was clearly ready to play the second he set foot on campus. He backs this up with a true freshman leading 606 regular snaps on the year. This number is almost 460 more than the next closest true freshman, so we do not see the need to discuss Watkins' participation in such depth over the balance of this article.

As shown through the table above and figure below, four true freshmen in addition to Sammy had over 200 snaps on the season. These players were Anthony, Humphries, Peake, and Crawford. Each contributed on the season. Humphries and Peake gave the receiving corps added depth. Both contributed and one could argue that Humphries gave the Tigers the spark needed to overcome a late deficit at home against Wake. Anthony at times showed why he was a very highly ranked linebacker coming out of high school and Crawford provided quality depth for a defensive line that needed it. Clearly all of the players with over 200 snaps contributed significantly so their freshman campaign was justified through participation numbers. 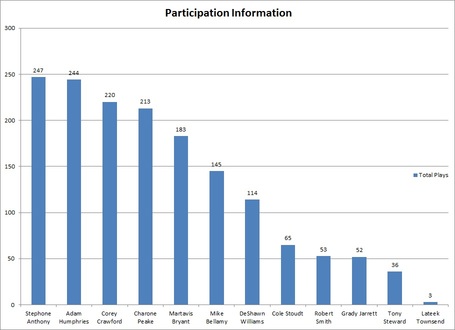 The players in the 100-200 snap range were Martavis Bryant, DeShawn Williams, and Mike Bellamy. Bryant was definitely a contributor this season. He was used early to stretch the field against the likes of FSU and Auburn. Bryant also has over 200 yards receiving on the year, including a pair of 54 yard grabs on the year. He does need the development however. Bellamy physically looked ready to play (i.e., his speed) and simply had too much talent to sit. Bellamy had nearly 350 yards on the season. Bellamy clearly needs the mental development, and if he had any, he would've gotten close to another 100 snaps at least. If he had more size, probably more than that.

Williams recorded 20 tackles through the ACCCG and played over 10 defensive snaps in five games--again justifiable in avoiding a redshirt because we simply had to have another DT. We pressed for them to play him more and he did so. However, he probably should've taken the RS.

Cole Stoudt was forced into duty. Getting a backup QB over 200 snaps is not a feasible expectation. You could argue he should have redshirted under normal depth conditions, but Clemson's lack of depth at the QB position forced him into action as the backup where he did play well relieving Boyd in the BC game. A freshman QB had to avoid a redshirt this season and Stoudt was simply further along than McNeal. Why we took Roberts is still confusing. We speculate that one of these QBs will leave Clemson, perhaps not this year but the followiing.

Now we get to the players who had less than 55 "regular" snaps on the season: Robert Smith, Grady Jarrett, Tony Steward, and Lateek Townsend. While Townsend did have 16 tackles on the season, all were on special teams. In that sense, he definitely contributed this season. However, we recruited him to be a stud linebacker, so I have a tough time legitimizing the special teams play to an extent. Only three of his snaps on the season were defensive snaps. We said that he was not ready yet and, according to the statistics, he wasn't. Most think that Townsend was played just to keep him from creating a distraction and apparently it worked. You could argue either way given the personality of the player and special teams contributions, but I definitely would have redshirted him.

We fully expected Robert Smith to see more action at the SS position, rotating in to spell Meeks. All indications following fall camp indicated that Smith would receive a significant amount of playing time and did in the Wofford game. He struggled in those 31 snaps and saw little playing time the balance of the regular season on defense. Harbison appeared to believe he was further along than he really was. Harbison appeared to have full intentions of granting Smith significant playing time but it just didn't work out. In retrospect, its clear he should've taken a RS.

Grady Jarrett was a player who we said was underrated coming out of high school. Jarrett definitely impressed the coaches during camp and was expected to contribute to a defensive line that lacked quality depth. Jarrett saw significant snaps early against Troy, again vs. UNC, then 12 snaps in the ACC Championship Game. Otherwise his time on the field was limited. Like Smith, the coaches probably expected Jarrett to see the field more--especially when you consider the depth issue Clemson had with the interior defensive line. The staff also likely wanted to give a young buck some experience for next season as both Rennie Moore and Brandon Thompson will be gone. Jarrett was pushing the two-deep back in august, so you would think that the staff was almost forced to burn his redshirt due to depth issues. Given the number of snaps, I would have liked to see him redshirt. Given the depth situation and the early decision to avoid sitting Jarrett, the coaches should have placed more emphasis on getting him snaps, especially in more of the games that did not go down the wire.

Tony Steward is a very unique case. It was obvious that the coaches were eager to get him on the field as quickly as possible simply because of his ridiculous talent level. Steward did have some issues with scheme but the big factor weighing on his redshirt decision had to be the the health of his knee. In reality, an injury to his other knee ended his season in October. A combination of injury and adjustment kept Steward off the field. The staff was clearly hoping to get him more involved early (25 total snaps in the first two games) but just couldn't rotate him in for significant snaps during the next four games (11 snaps for the balance of his year). Hindsight says he should have been redshirted but the defensive staff had grand thoughts of utilizing his talent immediately and injury ultimately killed this season.