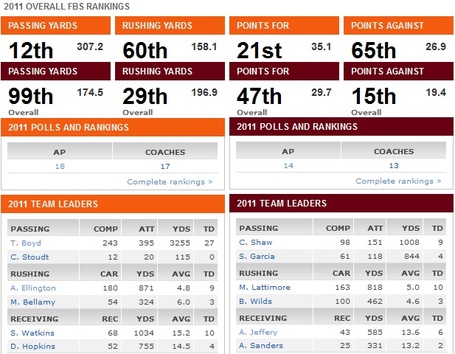 Last season there was a good bit of confusion regarding the offensive play calling. This season the ‘Old Ball Coach confirmed that he is the man behind the playcalls. Spurrier's time at Florida is best remembered for his high powered offenses that were able to blister opponents through the air and routinely produce a 1000 yard back on the ground. Most of the attention, however, came through an air attack that centered around the quarterback's ability to implement an offense that featured timing routes, advantages through formation, and superior receiving talent. When you hear Spurrier talk with the media, it is apparent that he would like to be able to throw the ball around more but has conceded that South Carolina simply does not have the personnel to be effective in such an attack.

South Carolina is a multiple offense that has grown increasingly more conservative as the season progressed. This paring of the offense is a function of injury, player dismissal, and necessity. Since the season's beginning, Stephen Garcia was dismissed from the football team and Kyle Nunn was lost for the season very early on with injury. Underperformance at the quarterback position and a drop-off with offensive line performance hindered the Carolina passing game. Around mid-season there was a philosophical shift to a more ball-control, run based offense that would more or less score 17 points a game and not ruin good defensive performances. The result has been a rather bland offense that relies on Conner Shaw managing football games and running backs holding onto the football.

You will see various looks out of South Carolina. They will show standard "I," Ace, and spread formations-the last both under center and out of the gun. South Carolina has also shown some "Wildcat"-or as they call it "WildCock"-looks with various skills personnel other than the quarterback taking a direct snap. You will recall Carolina's success with these types of items in previous years against our Tigers.

Clemson should be in a base 4-3 for the majority of the contest and will play nickel as the situation arises and if South Carolina shows more 4 WR looks. Clemson will need to limit third down conversions by the Gamecocks as their strategy will likely involve trying to shorten the game and reduce overall possessions by implementing a ball control attack centered on Brandon Wilds in the backfield. Wilds has done a decent job filling the shoes of injured Marcus Lattimore. Wilds is by no means Lattimore quality but he does average over 4.5 yards per carry and is capable of moving the football down the field. QB Conner Shaw is the other big threat on the ground. He is not afraid to tuck the ball and run and is a sincere threat as an offensive weapon gaining yards on the ground.

When USC does throw the football, the star is Alshon Jeffery. Jeffery is the real deal and more than likely will forgo his senior season at USC to become a high draft pick. This young man has all the tools it takes to be a superstar wide receiver and we are all vexed as to why the Gamecocks have not been successful this season getting the ball in his hands. Clemson has shown more man press coverage this season and will probably play some through combo coverages. I do not foresee Kevin Steele putting one of his DBs on an island against Jeffery because, as we saw last season in Death Valley, he can shred opposing defenses if his quarterback throws the ball somewhere near this receiver. Steele knows that he will have to bracket him or risk giving up some big plays. The other receiver to watch is Ace Sanders. Sanders lacks size but makes up for it with speed and quickness. Carolina likes to feature him on screens, medium routes, and will use him to stretch the field. I also would not be surprised to see a reverse or end around type play featuring Sanders.

We mentioned QB Conner Shaw earlier. While he has been a serviceable player since assuming the starter's role, I would not categorize his play as more than game management. Shaw has a lot of learning to do which is to be expected. Fortunately for Gamecock fans, his attitude and work ethic have been repeatedly praised. Shaw has a tendency to tuck the ball and run at the first sign of pressure from an opponent, though he has been successful rushing the football on the season. This means that Clemson will not only need to get to the signal caller but assure they maintain containment or risk giving up chunks of yards on the ground. His passing attack has been lackluster. We discussed Carolina's inability to feed Alshon Jeffery which, ultimately comes down to quarterback play. To Shaw's defense, Garcia was unsuccessful in this area early on as well.

Defensive coordinator Ellis Johnson is another familiar face to a lot of football fans in the South Carolina. Johnson's bio is very impressive and includes head coaching stints at Gardner Webb and his alma mater, The Citadel. Johnson has been a part of coaching staffs all over the South. Notable stops include a two runs at Alabama (the first was part of Gene Stallings' legendary run in the early ‘90's), Clemson, and Mississippi State before getting back to his home state and as the Gamecocks' defensive coordinator.

Johnson's defense is a base 4-2-5 and its success largely depends on a linebacker/safety hybrid position he refers to as the "Spur" position. A big advantage of this defense is it gives the defensive coordinator a lot of different options he can show through his defense. Here is a primer we put together on the 4-2-5 prior to last season's contest that explains how Ellis Johnson's scheme works. We've seen variations of this defense throughout the season including last weekend against the NC State Wolfpack.

South Carolina has shown both zone and man coverages extensively this fall. Their philosophy shifted towards more man as the season progressed. Carolina's DBs seem more comfortable with the simpler man concepts but have been susceptible. Obviously the key to man coverage is the ability to put pressure on the opposing QB and make him get rind of the football earlier rather than later. If Carolina chooses to play man (especially man-press) they will be susceptible to Clemson's speed and athleticism at the receiver spot, especially if Boyd has some time to throw. They have been hurt by leaving their corners on an island (East Carolina simply attacked and frequently beat their secondary--Stephon Gilmore immediately comes to mind--early in the season).

Because Clemson's recent opponents have largely been successful playing looser coverages (heels at the sticks, keep things in front of you strategy) I wouldn't be surprised to see more loose C3 and more C4 out of the Cocks this weekend. We will see C1 looks at length on Saturday, to which Tajh has to quickly identify where the mismatches lie. He'll also need to do a better job looking off the safety, particularly on shots down the field. I wouldn't say that South Carolina's secondary is elite but they have played well and taken advantage of opponents' miscues. The defense as a whole has 17 interceptions on the year.

Carolina features a very talented defensive front that gives Ellis Johnson a lot of options when dialing up a defense. Their starting four are very, very good and Jadeveon Clowney has shown why he was at the top of most recruiting rankings for the 2011 class. The effectiveness of these men allows Carolina to get adequate pressure often with a simple four man rush. Carolina will blitz with both C1 and base zone coverages in the secondary. The man blitzes are your typical overload blitzes. Zone blitzes feature some "Fire" packages. Carolina also likes to drop their athletic ends into coverage when bringing a linebacker.

Carolina is comfortable utilizing five linemen in a straight up 50 front (Clowney plus the starting four). 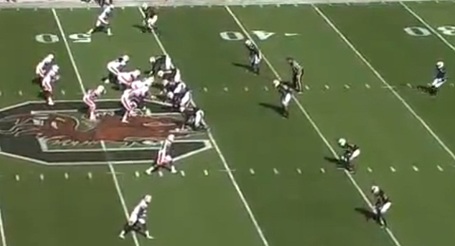 South Carolina also mixes it up with their athletic ends, using them both in a traditional end role and dropping them into pass defense. Below you see Devin Taylor in a two point stance. Notice SPUR on the LOS in a coverage role at the bottom of the picture.

Both screen shots above show a single high safety look. This sets up for both C1 and C3 in the secondary. Carolina has shown two high looks (see below) that allow C2, C4, and various combo coverages. The two high is typical against trips, allows combo coverages (31--C3 to the trips side, C1 on the back side), while keeping a safety in the middle to play center field and help with run support. 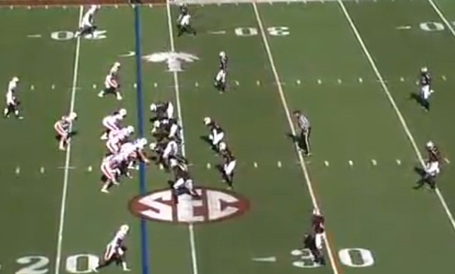