Clemson cruises down to Columbia to do battle with its in-state rival Saturday.  The Tigers again have an opportunity to gain 10 wins for the first time in over 20 years and break a two game losing streak against the Gamecocks.  We'll see how this squad's recruited talent compares to our Clemson Tigers. Before we get into the analysis, I'll point out that I have taken the depth charts for both teams DIRECTLY from the Clemson website (www.clemsontigers.com).  A pdf version of the depth charts can be found here.  I will go ahead and tell you that because of injuries and Monday depth chart adjustments, some items here may end up a little out of place come gametime.  I won't try to interpret or guess.  In an effort to maintain consistency, I'll use both teams' depth charts as presented on the official Clemson Athletics website.

I'll point out that Carolina features Bruce Ellington who was a finalist for Mr. Football but chose to sign with the Gamecocks as a basketball player, hence the "N/A" rating throughout.  He was considered a four star by some analysts, so this "N/A" brings down the average.  We chose to stay consistent with assumptions we made at the beginning of the year in this analysis, but think such a point needs to be addressed in advance.

What you'll notice through the data is Clemson has a definitely talent advantage on offense.  Everywhere else is essentially even.  The overall offensive advantage gives Clemson the analysis advantage considering the assumptions made for this exercise. 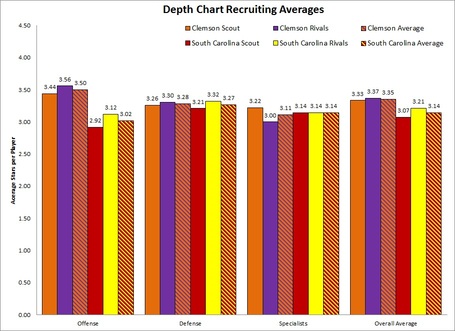