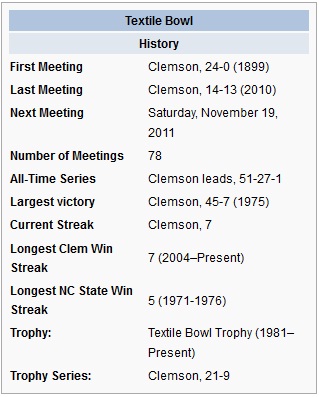 Comparison of the two teams (coursety of ESPN.com): 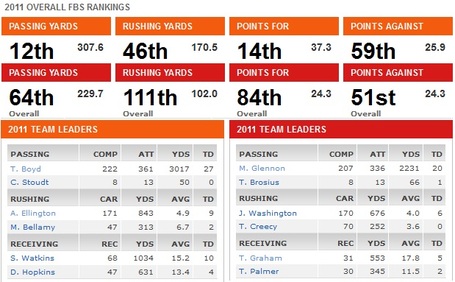 This week's Textile Bowl showcases the Atlantic Division Champs vs. an up and down North Carolina State Wolfpack squad. My crew will watch this one intensely, as they absolutely love the Textile Bowl. Our Tigers look to make it eight straight over the Pack when Clemson visits their interdivision research triangle foes.

Head Coach Tom O'Brien leads the NC State Wolfpack into play this weekend as they battle the Clemson Tigers up in Raleigh. O'Brien is a graduate of the Naval Academy and achieved the rank of Major in the Marine Corps. This military background surely set the path for his coaching style, as shown specifically through his teams at Boston College. O'Brien was a coach at Navy then the offensive line/offensive coordinator at Virginia prior to accepting the head job at Boston College in 1997. O'Brien was successful at BC, first tying for 1st in the Big East (2004) then winning the Atlantic Division of the ACC the following year. O'Brien left BC following the 2006 campaign to take over as the main man at NCST. TB's time at State has been rather lackluster. The highlight of his reign over the Pack was a 9-4 record and Champs Sports Bowl victory last season. This year has not been so kind to the Major as NC State currently sits at 5-5 (2-4 in conference) and desperately needs victories to become bowl eligible. O'Brien is definitely on the hot seat. Alumni, students, fans, boosters, and administrators all gave him the benefit of the doubt in prior years but are growing impatient as his time in the state of North Carolina lengthens.

NC State Offensive Coordinator Dana Bible is experienced in the game at all levels (including a stint as the Phil. Eagles' OC) and saw quite a bit of success as NC State's offensive coordinator last season. A year ago, Bible was able to utilize then-QB Russell Wilson's great ability to attack opposing defenses both through the air and on the ground. This season has been more difficult for the Cincinnati alum. NCST ranks 100th in the NCAA in overall offense (332 ypg) and 111th in rushing yards (just over 100 per game). Needless to say, this group is missing the dynamic play Wilson brought to the table last season.

While NCST's base personnel is pro, expect to see a multitude of looks from Bible's offense. They are quite comfortable in straight Ace and twin Ace looks under center and all your standard spread sets out of the gun. The Wolfpack's inability to move the ball on the ground has forced this offense to essentially become one dimensional this season in terms of yardage gaining plays.

Starting QB Mike Glennon has nice raw numbers (2000+ yards passing, 20 TDs and 10 picks) while completing over 60% of his passes on the year. He has, however, taken 22 sacks on the season, so we'll see if our pass rush improves. Glennon's top target is senior receiver T.J. Graham. Graham has over 31 catches for 550+ receiving yards and five (5) TDs on the season.

All this being said, we expect to see State take some shots down the field, as does defensive coordinator Kevin Steele:

"With [Russell] Wilson there was a lot more threat of the run, the pull down, the scramble, quarterback draws and runs – those kinds of things. Outside of that is pretty much the same. They do have what we call Seattle routes - which are downfield throws they sprinkle them in. They are not a huge Seattle team but they take their shots. [Mike] Glennon has a strong arm and can unleash it. We don’t see a lot of screens because we play press coverage, but they will run the screen in there."

We expect Clemson to show a fair amount of nickel in addition to its base 4-3/3-4 looks this week-assuming the Tigers can stop NCST's poor rushing attack. We saw more of Xavier Brewer at the strong safety spot and expect more of the same this week. We also saw Coty Sensabaugh and others show press coverage against Wake a week ago.

Here is what Steele had to say during the week about this coverage (particularly Sensabaugh):

Look at what he did with [Wake's Chris] Givens," he said. "He is a very talented wide receiver that can run, and we matched Coty up on him in press coverage and he had two catches for 16 yards. So he did a very nice job on him. In the offseason he got a lot stronger and that helped him a lot. He has done a nice job in terms of his strength. He is really smart and on the field he has excellent press technique - patience is the key there.

Sensabaugh has improved over the season but we are still a little cautious about some of these tactics, particularly when you consider some of his earlier struggles and the fact that our DBs have shown no capability of jamming opposing receivers to date. We will point out the obvious: The ability to play man press effectively gives the defensive coordinator a lot more options, particularly when you take into account blitz packages. However, when you show these looks you have to be able to put pressure on the opposing QB or you will get beaten.

With the deep pass a constant threat, Clemson will need to be careful not to give up the big play on defense. We have grown accustomed to this defense surrendering long plays over the past couple years so we will be curious to see how much Man2Man Steele is willing to play and how well safeties Hall and Brewer/Meeks help over the top on Saturday.

Defensively, Mike Archer calls the shots at NC State. You will probably recognize his name as he was the head coach at LSU in the late '80's, following Bill Arnsparger's rebuild of the program. His team took a share of the SEC championship in '88. Archer has a nice resume, coaching at Virginia, Kentucky, and with the Pittsburgh Steelers before coming to NC State. I'll note that he has coached on that side of the ball exclusively since leaving Louisiana State.

NC State also has another name of note on its defensive staff in Jon Tenuta. Tenuta, former GT and Notre Dame defensive coordinator/assistant coach, joined the NC State staff prior to last season and coaches the linebackers for O'Brien and Archer. Our opinion of Tenuta is similar to that of Reggie Herring...not so impressive a defensive coordinator but a very good position coach. His backers allowed Archer to try things over the past couple seasons that wouldn't have been feasible several years ago.

Archer's philosophy is similar to John Chavis or Vic Koenning, in that he plays a lot of 4-2-5 with 4-3 personnel and he likes to play a softer C2/C3 zone, a similar zone look that we've seen out of Boston College in the past. They will bring their backers in strategic spots, specifically on fire zone blitzes. We do expect to see them show "traditional nickel" (i.e. sub in the fifth DB) because the extra defensive back will be necessary against this Clemson offense--per usual for our opponents this season.

We'll be interested to see if Clemson can finally move someone up front this week to set up the A-gap to A-gap running we've talked about for the last couple months. To date, Clemson has largely been unimpressive up front at creating push and will be further challenged by the injury to Phillip Price. We'll continue to focus on Smith, Freeman, and McClain inside and expect to see Mason Cloy substituted in at any or all of these spots. McClain's performance last week was pitiful and we will need better effort out of him if we are to achieve some team goals.

Chad Morris echoed our sentiments throughout the week, saying the following (thanks O&W.com):

On the offensive line’s play against Wake Forest: "From pass-blocking, I’d say I thought we did really well. Tajh got hit once or twice all night long, very pleased with the pass-blocking. From the run game standpoint, we rushed for 172 yards, should have rushed for 250 yards. That’s me, my mindset of, we want the four inches back (on the fourth and inches stopped at the Clemson 33 in the fourth quarter). We’ve got to get better play out of our guard positions, both of them. Very non-efficient in the run game. That’s calling it like it is. You can read into that whatever you want.

In the passing game, we'll look to see if/how Sammy Watkins responds from the shoulder injury sustained last week. Should Swinney run him out there, we expect the staff will take no chances with him and shut him down at the first sign of discomfort. Otherwise, Tajh Boyd must do better at getting through his progressions and make better decisions. Last week he appeared to force things and was not patient until later in the game once he gained some momentum through success with screens. NC State should be content to make Boyd beat them with methodical drives, particularly if Sammy Watkins is not 100%.

This NCST team has been unpredictable to say the least this year. At 2-4 in conference, their record does not command much respect. Their two conference wins, though, were impressive victories over UNC and Virginia, with the former being a 13-0 shutout at home. The flip side is equally unimpressive. We saw this team get absolutely throttled in an early season game at Cincinnati and another beat down at FSU. Last week State was upset by a lackluster Boston College team. At this point, O'Brien desperately needs wins to (A) lock up bowl eligibility and (B) get the vote of approval for another season as NCST's football coach in '12. This makes this team desperate and desperate teams can be dangerous. Clemson, on the other hand, needs this win only to pad the W/L record because the Tigers punched their ticket to the ACCCG last week against Wake. Swinney and crew will need to guard against complacency and a flat performance because of these factors.

North Carolina State Schedule/Results (Props to SBNation for the info)