Basic information regarding both teams (thanks to www.espn.com) 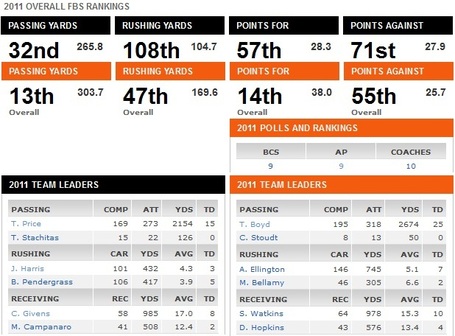 Jim Grobe is a former Virginia football player, graduating from UVA in '74. He began his coaching career as a graduate assistant in Charlottesville. He moved around for a couple of years coaching linebackers at Marshall then at Air Force. Grobe stayed at Air Force for 11 seasons before landing a head coaching job at Ohio University where was the head man at Ohio from ‘95 to '00. At that time Coach Grobe left to take the Wake Forest job. Grobe built the Demon Deacons in a methodical fashion, eventually reaching the apex of his career to date in 2006. The ‘06 season saw Wake win 11 contests, an ACC crown, and the Deacons play in the Orange Bowl to culminate the season. This achievement should not be discounted as the growth of this program was incredible considering the state of WF's program when Grobe took over.

Grobe's mid-‘00's teams were noted for their ability to play good fundamentally on both sides of the football. Specifically, Grobe's teams were known for misdirection offenses and their athletic and well coached offensive lines, heavily influenced by current AF coach Troy Calhoun. These offensive lines troubled the Tigers as Clemson struggled to tame pulling linemen and an unconventional and unique blocking scheme. Over the past couple years, Wake has evolved into more of a multiple spread/pro attack that is featured at many universities.

One thing that you should notice about Grobe is his ability to get the most out of his players, winning games with lesser talent than most around him (Clemson flat out covers the Deacs when you compare them to Clemson's talent). Wake will play smart. Wake will play tough. Wake will play good fundamental football. That is why Grobe has been successful, and when he does get a talented player he will be sure to cash that talent into production on the football field.

Steed Lobotzke was a player and grad assistant at the Air Force then joined Grobe' staff at Ohio in ‘97 after fulfilling a tour of duty in the military. Lobotzke followed JG to Wake, eventually becoming Wake's offensive coordinator in 2003 when Troy Calhoun left for the Denver Broncos. Clearly Lobotzke was around and was a critical part of the development and implementation of Wake's ACC Championship winning offense. Since, Lobotzke has taken a different philosophy with his offense, showing more "conventional" looks in his attack. We will see some pro-style sets, spread-type shotgun looks, and also some plays from the pistol. Long and short, forget most of the views you may have formed of the WF offense during the mid-00's.

Wake has a more open offense and will throw the ball around much more than in the past. It's been infused with a little Air Raid this year. They'll run tons of mesh routes and short crossing routes designed to get the ball in space. Unfortunately they don't pass block all that well, so Branch should get a couple. We think you'll see us in mostly Nickel this weekend and we hope Stephone Anthony gets considerable PT.

Sophomore QB Tanner Price and Junior WR Chris Givens have taken advantage of this more open offense. Price has been efficient throwing the ball this season and has well over 2000 yards through the air already to this point. Givens has nearly 1000 yards going into the Clemson game and easily leads the Deacs in receiving areas. Clemson does not want to leave Givens on an island or the Tigers will pay, and Wake has excelled at getting him opportunities. Hes just behind Sammy Watkins in receptions (42 to 38) and averages 1 yd less per game. He has legit talent and, if he can remain healthy, will play at the next level.

In the rushing area, WF has had poor performance. Josh Harris has been nursing a sore hamstring for most of the season but is definitely a threat if healthy. Otherwise, WF will feature Brandon Pendergrass in the backfield again this week. Whomever the rusher, Clemson will need to improve on basic fundamentals including form tackling or we'll just improve their 104th national ranking in rush offense.

We'll be watching Xavier Brewer this week. The hot topic over the bye and into this week was the number of snaps he could take at the safety position. Steele confirmed he was getting reps here. Keep in mind that game situations will dictate his on-field location and how many snaps at each spot he receives.

Defensive Coordinator Brad Lambert is a Kansas State graduate who spent time as a UGA assistant before coming to wake in ‘01. Lambert was promoted to defensive coordinator in 2008. Lambert originally coached the linebackers but moved to become the defensive back's position coach after becoming the DC in Winston-Salem. Defensively, the Deacons are described as multiple and feature a variety of looks and are comfortable in both three and four man down lineman fronts. Don't be surprised to see more 3-4 looks (well, as close to a "traditional" 3-4 as you can get given the fact that Clemson operates in its HUNH offense). As always, we expect Wake to run another DB or two onto the field to combat the Clemson spread formations.

WF tends to be a heavily slanting front, out of multiple looks. They are one of the better stemming (pre-snap movement by DL) teams you'll see. They like to show one front, and just at the snap they will slide it one way. This is to confuse the OL's read to set the blocking scheme. Our offensive pace takes this away when its going well. However, they like to stunt and blitz from everywhere, which has caused our OL problems.

I'll also point out that this season's defense is vastly improved over the efforts given one season ago. While Wake has given up 19 or more points in each of its ACC games this season (including a ton against UNC), some younger players have stepped up and others become more comfortable with the defensive attack. Nikita Whitlock and Kyle Wilber have been identified as impact players and I'll be paying attention to Bud Noel at the corner spot. Wake developed comfortable depth at ILB and will have the ability to keep these guys fresh throughout the contest IF they can successfully substitute. The Deacons boasted about having a quality four man rotation here inside.

It is imperative that Clemson get a hat on Whitlock as he has been a real pain for opponents this season. Further, Clemson's offense relies on A-Gap to A-Gap rushing plays and cannot afford to get killed up the gut by the nose. WF tends to key blitz their run fits and press gaps, which will look like they're run-blitzing a lot. The big difference between GT and WF in coverage is that Wake will try you Man/man, and plays more Cover 1, whereas Tech is a solid C2 team.

We anticipate Clemson will continue to attack through the air, particularly through short and middle range routes. Wake traditionally fears the big play and does everything it can to avoid putting itself in at-risk situations, but playing more man against us is dangerous. This means that Tajh Boyd and the CU offense must remain patient and move the ball methodically. We'll take intermediate stuff to Nuk, Sammy, and Dwayne (edited at 10:20 EST 11/12/11). We expect Morris to run verticals and take a shot or two per usual to keep the defense honest but aren't necessarily counting on too many bombs being completed on Saturday.