Information regarding television coverage can be found at the ACC website or by following this link. 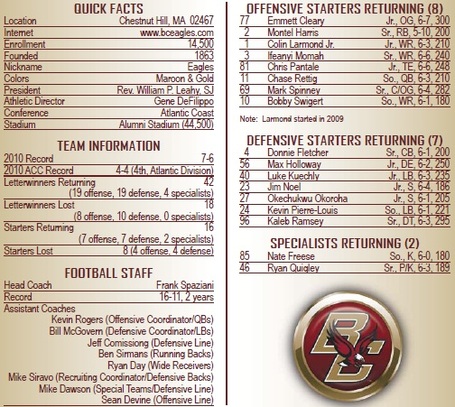 Frank Spaziani is in his third full season as head man at Boston College. Spaz, if you will recall, took over after Jeff Jagodzinski was given the boot for chatting with the New York Jets about their then-vacant head coaching position without permission. Jagz defied the BC athletic director and effectively turned the Boston College head football coaching position into a revolving door (Tom O'Brien left BC prior to the '07 season).  After Jagz left, Coach Spaziani was promoted from the defensive coordinator position to become the head coach in time for BC's 2009 season.  It is also of note that Spaz led BC to its 2006 bowl victory over Navy (following O'Brien's departure) before being passed over for Jagz as the Eagles' head coach.

Spaz is a defensive guy, and a good one. After an early/mid-career stint at Navy, Spaz got his recognition as defensive coordinator at the University of Virginia in the early '90's.  He then moved to the Canadian Football League from '92 to '96 before signing on with Boston College in time for the '97 season. FS became defensive coordinator in '99 and held that position until he was elevated to the top job in '08.

Spaziani was the root for the good defensive efforts that we saw out of BC during the Eagles' Atlantic title runs since joining the ACC.  His defenses have traditionally been fundamentally very sound AND physical.  Spaziani is often referred to as the "Mad Scientist" (not to be confused with village idiot former Clemson offensive coordinator Rob "Mad Scientist" Spence) and had a reputation as coordinator for trying many, many things.  I would encourage you to read Dr. B's piece regarding his 3-5-3 concept to see how innovative this guy can get on the defensive side of the ball. Keep in mind that the 3-5-3 is a situational pass defense, not their base.

Note that all coaching graphics (Head Coach, Off. Coordinators, and Def. Coordinator) were attained through the BC 2011 football media guide. 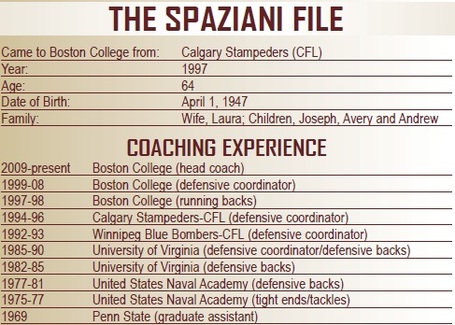 Bill McGovern, BC's current defensive coordinator, has been at the New England school for over a decade, serving as the Eagles' linebackers coach before being promoted to his current role.  McGovern has been credited with molding quite a few players into stud linebackers including 2008 ACC defensive player of the year Mark Herzlich and 2009's Freshman of the Year Luke Kuechly.   Boston College has traditionally been noted as having a good fundamental tough-nosed defense (and team as a whole). 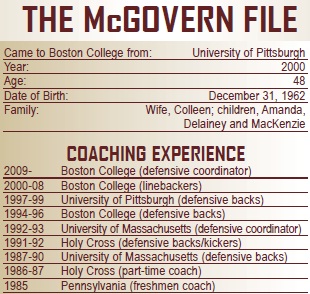 Their base scheme is a 4-3 and actually quite simple, which is why they always execute it well. They do not change up the front too much. It is Slide and Stack for the most part, but they don't use a Wide 9. They do stunt, and they run blitz quite often, but pass blitzes have been few and far between over the years. Spaziani prefers to drop 8 men in coverage to make the opponent execute repeatedly than risk a big play. Coverage schemes are somewhat similar in philosophy to former Clemson defensive coordinator Vic Koenning's as they show almost entirely a spot-drop Cover 3 Zone with strong/weak rotations (though VK did it with a 4-2-5). The blitzes they do throw at you are usually Fire Zones.

What BC does best, and this is why they are always stout against the run, is gap control. We preach it here, but BC does it quite well every year, and it makes up for the lack of talent they sometimes have up front. Their line tends to slant and they put those big guys right into gaps and make you move them. That keeps the OL occupied so theLBs can make plays and get the headlines. I do not know it for a fact, but they do play like a 2-gapped front inside.

We had no success last season on offense but clearly are a different squad this season.

Expect Clemson to continue to try proportionally more inside zones and some stretch/sweep plays against this type of front as opposed to gap plays. CU has not been exceptionally successful A-Gap to A-Gap but this is a significant concept in Morris' overall philosophy.  Also, gap scheme plays (like Power O) tend to be taken away by a front like this.  I'll admit that I have not been overjoyed by Clemson's run blocking to date and would really love to see us take the war to BC here this weekend.

Clemson and Tajh Boyd will need to remain patient and allow the superior talent to just move the sticks. The big plays will happen with Clemson's superior skill players if the Tigers play within themselves and don't make silly mistakes/turn the ball over.  Outside of the IZ, I suspect we'll see more inverted veer and zone reads, particularly as Tajh has shown excellent decision making skills over the past couple weeks in the running game.  Boyd picked up some big yards on the ground keeping drives moving and freeing up other options for Morris' attack.

I expect to see some shorter routes and screens in the passing game as BC will be focused on keeping our stable of talented receivers (and tight end) in front of them. Should Tajh accept this and systematically make proper decisions, Clemson should put up a ton of yards and hit its scoring average for the season.

The offseason saw veteran college football coach Gary Tranquill retire and former Minnesota Vikings quarterbacks coach Kevin Rogers take over as the Eagles' offensive coordinator.  Rogers took a leave of absence a couple weeks into the season for health reasons and was replaced by Tight Ends coach Dave Brock.  The BC offense has not significantly changed throughout this transition. 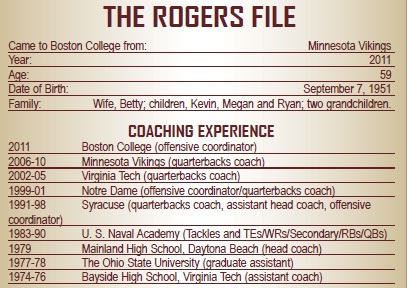 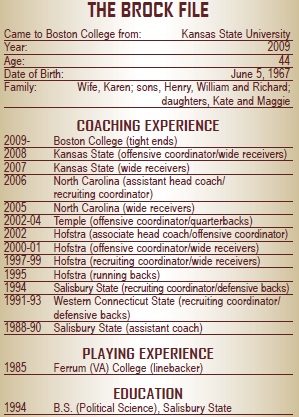 Montel Harris, Boston College's career rushing leader after last week's game against Wake, is out for the Clemson game.  Harris was expected to be a big part of the Eagles' scheme this week but unfortunately was injured a week ago after returning from missed games earlier in the season because of offseason surgery.  Coach Spaziani will not jeopardize this young man's future by forcing him onto the field in such a scenario.  This is a big blow to a BC offensive attack that has been flaky at best to start this season.  Harris is backed up by Andre Williams and Deuce Finch who will try to fill his large shoes.

BC will also rely on Chase Rettig to lift this team from the QB spot.  Rettig, to date, has been very mediocre with 5 TDs and 4 INTs on the season.  Retting has a 52.1% completion percentage and just over 1050 yards through the air.  Rettig's two favorite targets to date are Colin Larmond (19 catches for 342 yards and 2 TDs) and Bobby Swygert (23 grabs for 193 yards).  All in all though, without Harris this offense is nothing impressive.

BC uses a lot of the same base formations we saw last week against Va Tech--basic two back sets and ace looks under center and the standard 3-4 WR looks out of the gun.  I suspect that Boston College will be content to run the ball if possible, as Rettig's numbers on the year are poor.  That could be a challenge considering BC's wounded backfield and, obviously, if Clemson gets up early they will be forced to throw the ball to try to keep up with the Clemson offense.  All being said, BC desperately wants to control the ball to reduce the total number of possessions and keep their young QB out of tough situations.

We expect Clemson to play a lot of base (4-3) defense. Boston College will show many of the same looks Virginia Tech showed them. Consequently, Clemson will show a lot of the same things as last week.  4-3 Under/Stack with an emphasis on stopping the run and making a sophomore QB do some great things. You'll see a sprinkling of 3-4 again too.  Clearly Clemson will blitz some, especially with a lead, but you'll also see two deep, three deep, man, combination, and Robber looks. Probably mostly 2 Man and Robber, because we doubt Steele is scared of their WRs. It appears as though the Clemson defense is getting more confident as the season goes along and we'll look at the younger players' participation, linebacker play, and overall tackling as this group tries to shore up some loose ends heading into the second half of the season.

If Clemson doesn't win going away, I will be surprised and will be concerned.  Boston College has been nothing less than hot garbage to date and is missing a critical player in Harris.  With ACC Coastal foes Georgia Tech and North Carolina coming up following the trip to College Park next Saturday, Clemson should use this as a breather and assure its foothold as a player in the ACC and NCAA football world. 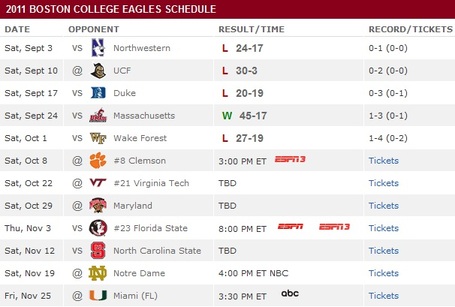