Clemson hosts the Boston College Eagles this weekend in Death Valley. We'll see how this squad's recruited talent compares to our Clemson Tigers. Before we get into the analysis, I'll point out that I have taken the depth charts for both teams DIRECTLY from the Clemson website (www.clemsontigers.com). A pdf version of this can be found here. I will go ahead and tell you that because of injuries and Monday depth chart adjustments, some items here may end up a little out of place come gametime. I won't try to interpret or guess. In an effort to maintain consistency, I'll use both teams' depth charts as presented on the official Clemson Athletics website.

The first thing you will notice here is the overall advantage Clemson has in terms of stars per player over BC. Clemson clearly has out recruited the Eagles in terms of high school talent up and down the depth chart. The 3/4 star advantage is a testament to this recruiting supremacy. It is a good example of how good fundamentals and coaching can overcome talent, as Boston College was able to defeat Clemson last season despite having fewer stars from the recruiting "experts." 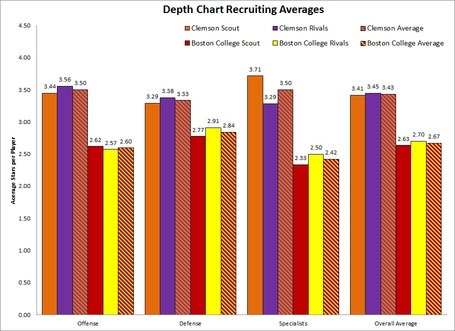 SB Nation would very much like to hear your opinions and feedback on the user experience on this site. We are always trying to improve user experiences, navigation and brand integrations and your feedback is valuable in this process. All responses will be kept confidential and the entire process will only take a few minutes. Also, as incentive to participate, for the 3 SB Nation sites with the highest percentage of completed surveys, SB Nation will make a $500 donation to the charity of our choice, in our name. To take the survey, click here:
http://www.surveymonkey.com/s/MWM6363