Overall Game Preview (thanks to ESPN and the GT Athletic Department--www.ramblinwreck.com for the help): 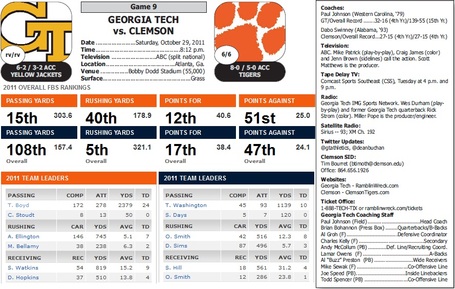 Paul Johnson is affectionately known as an option master.  Johnson's scheme has given Clemson issues in the past, particularly in the '09 ACCCG. Clemson had much more success against the Jackets last season, whipping Georgia Tech at Death Valley. Clemson was completely dominant in the trenches and was able to simply run over GT. On the flip side, I was surprised that Johnson abandoned his trusty option attack at times in favor of pass attempts at critical points during drives.

We have spent most of our time here studying Paul Johnson's offensive system from a defensive point of view, with the lone exception being a piece on specifically on option QB play.  Below we've captured a handful of defensive articles along with the aforementioned QB article listed above.  We think these are important enough to place on the article's front page.  Therefore, do yourself a favor and refresh on these concepts before our Tigers take the field on Saturday.  Understanding of these concepts allows one to accurately assess Kevin Steele's defensive performance and adjustment strategy.

Johnson gained national recognition as head coach of two schools, Georgia Southern and Navy, before taking over the Georgia Tech program.  Under Johnson's guidance GA Southern won two D1-AA championships ('99 & '00) and was the championship runner up once ('98).  Johnson was also the offensive coordinator for two other D1-AA championships at Southern in '85 and '86 under the great Erk Russell.

Johnson's most recognizable success outside of the forfeited 2009 ACC Championship at Tech was probably his tour of duty at Navy. PJ resigned at GA Southern and took over in Annapolis in time for the 2002 season hoping to bring his 1-AA mastery to Division 1 football. The Western Carolina graduate took over a Navy program that had been to one bowl game since the 1981 season and was winless in 2001. After a 2-10 opening campaign, Johnson built a program that has not missed a bowl game since. His highlights with the Midshipmen include a 10-win season in ‘04, the Bobby Dodd Coach of the Year Award, and the school's first victory over Notre Dame (2007) since 1963. His 45-29 record at Navy is nothing less than incredible and it would be a vast understatement to say simply that he left the Navy football program in better shape than he found it.

Everyone reading this is familiar with PJ's success at Georgia Tech. In late-2007, Johnson took over a Yellow Jacket program that was on NCAA probation and was handicapped by reduced scholarships. PJ led the Jackets to a first place tie in the Coastal division in ‘08 and Tech won the ACC in 2009. Johnson was named ACC Coach of the Year for both the 2008 and 2009 seasons.  While the Yellow Jackets struggled last season, the Techies rebounded for a strong start to the 2011 season.

PJ proved many critics wrong when he took his flexbone option-based offense to Division 1-A college football and won games. His success is pretty simple: Coach Johnson is a stickler for the fundamentals and his teams generally execute well. We saw this a couple years ago in the ACCCG when the Jackets ran the ball nearly flawlessly all evening. The job that their offensive line did in that contest was incredible and a true testament to their leader's insistence on execution and perfection. PJ will tell you the same thing that we have said year after year: the option (even if you limit the number of plays you run) is nearly unstoppable when each player does his job and plays proper fundamental football. Granted, when everyone does their jobs, any offense is nearly unstoppable.

I'll keep this short and sweet (the links above explain these concepts very well). The main objective for the flexbone is to establish the fullback dive. The dive sets up everything in this offense including the veer/option attack and the passing game.  If we cannot stop this, Clemson will give up a ton of yards and points. The next key is the QB. Hit him every time GT runs the football but each player must maintain his specific assignment.  Missed assignments get you killed quickly against the option.  Then there is the pitch, but again that is goes back to proper fundamentals and assignment football. The final item is the forward pass. GT likes to lull you to sleep then ding you, particularly off of play action or a quasi-option look.

We will warn you, though; Georgia Tech has garnered a reputation for being a high flying more-pass happy offense this season. The have scored quite a few TD's off of long passes, but the Jackets still only have 102 pass attempts at the 8 game mark (12.75 pass attempts per game).  I admit they are more impressive in the passing game this year but don't want folks to lose sight of the fact that they have run the ball well over four times as many times as they've thrown this season.  If they hit a big one it will be after monotonously running the dive and an array of option plays. To the counterpoint, GT looked terrible offensively last week after starting the year racking up tons of yards against lesser opponents.

Clemson will likely show a wide array of looks as they did last season.  We saw three man fronts with an End playing Jack, four man fronts, and five man fronts. We've explained that a lot of these looks really end up incorporating the same schemes, particularly when you compare a 4-3 under look to some 5-2 looks.  We also described how to use the Bear front to defend Ga Tech a while back, so look into this guy as well.  Here is another useful link that reminds you how fronts are used, particularly the 3-4 and multiple switches.

Clemson needs run support from the DBs.  I will caution that these guys cannot get caught sleeping or we will give up six.  However, I look for Steele to slide a safety into the box and get creative to free a guy like Meeks up to help with run support.  I just hope Mr. Meeks remembers that he has arms and can wrap up when he is filling the alley.  Kill shots are nice...unless you miss, then they are just lots of yards given up.

Look for us to sit in Cover 4 coverage or split coverage (quarters to one side, C2 on the boundary) most of the day. Both safeties in C4 will probably be within 10 yards of the LOS. They must be looking for the crackback block from the WR as well as an arc block from the Wingback, it is critical they play these blocks well.

In our film study of Tech over this season, and we do watch them a good bit because we love watching a well-run option, we've noticed that in the last 3 games several things have occured to limit them. First, Tevin Washington has been forced to keep the ball on the Veer because opponents are taking away his pitchman. Tevin is not the runner that Nesbitt was, not even close. The scheme that Maryland and Miami used was actually the same that Clemson has used against Tech before, but in the Miami game the MLB Spence was all over the place. In the MD game, their DT basically ripped GT's OL apart with 22 tackles in one game. Second, Tech has failed to hit WR Stephen Hill in the passing game. He's not getting open like he was now that folks are keying on him. Washington hasn't thrown the most beautiful ball in his direction in any case. Finally, and most importantly, Tech's OL has not played well whatsoever. Their Wings miss blocks that they were hitting earlier. Their linemen don't generate push inside for the Dive, and their Tackles aren't getting the LB's blocked on the Veer (otherwise the pitch would be uncovered). If Smith gets the ball on the pitch though, watch out.

Al Groh took over GT's defensive coordinator position after parting ways with the University of Virginia following the 2009 campaign. Groh's background is too extensive for me to discuss fully, but I will mention a few items. Al has been coaching at all levels since the late ‘60's and has plenty of college and professional coaching experience. Groh was the head coach at Wake in the early ‘80's, followed Bill Parcells around for quite a while, became the Jets head man for a year, then took over the head job at Virginia (where he likened his immense intellect and NFL experience to playing chess while the rest of the conference was playing checkers). Unfortunately for Al, the Chessmaster was taken to school by much of the conference (again, as if his Wake Forest experience wasn't enough) and got the axe. Apparently he was not as smart as he thought himself to be. Groh is noted for his 3-4 defense and is in the process of molding and recruiting players to better fit his defensive scheme though.

Groh's 3-4 system is the basic one that has survived from the 1980s. It's two-gapped Okie and requires a NG that can absorb a double-team. They don't have one, and in fact its a small front line. Dr. B, frustrated about the misinformation floating around, put together an insightful piece on 3-4 basics over the summer.  Remember to pay attention to specifics on the two-gap scheme and not the single gapper Bum's Son used at Dallas.

Georgia Tech was extremely soft up front last season. Clemson ran the ball at will against the Jackets.  Unfortunately, the Tigers decided to quit running the ball during the 2nd or 3rd quarters.  We questioned at the time whether or not this was to try to jump start Kyle Parker but now are resigned to the fact that the offensive staff had no clue what it was doing last season outside of the Auburn game.

The Jackets have improved since last year on the defensive side of the football, particularly with their fronts.  I am definitely not saying they are killers up front, just better than a year ago.  Clemson flat out blew them off the football last season in Death Valley, and I don't expect to see the same result, at least not to the tune of what happened a year ago.  Ga Tech will have to go to nickel to defend Clemson's spread offense.  Tech likes to show three down linemen and creep a LB to the LOS on the weakside, effectively leaving two backers in the field's middle. That LB is the best one in our opinion. We'd take him here. Groh has brought both of these guys at times this season and I wouldn't necessarily be surprised to see him mix in 3, 4, 5, and 6 man pressure schemes, especially to try and confuse our Sophomore QB. Their blitzes tend to be zone blitzes and twists. Along those same lines, I expect a multitude of coverages including C1, C4, and some combo coverages, but they are primarily a spot drop Cover 2 team.

Obviously the Clemson offense will try to keep on doing what it has been doing.  We need Tajh Boyd to avoid silly mistakes and to stay patient reading coverages.  Also, while GT's secondary has improved year over year, they are susceptible.  Tech is better deep than a year ago but can still be beaten underneath easily.  I also wouldn't be scared to heave the ball down the field.  I'll take Clemson's WR's deep over GT's secondary any day, particularly if we get some one on one situations.  You know the drill on the ground...A gap to A gap with the deep back plus the standard buck sweeps, jet sweeps, and possibly an inside counter or two.  Should be standard operating procedures for Clemson's "O."  We all know that D.J. Howard will be starting, but that shouldn't effect Clemson's strategy.  Morris has faith in Howard because he has played well when inserted into football games in '11. 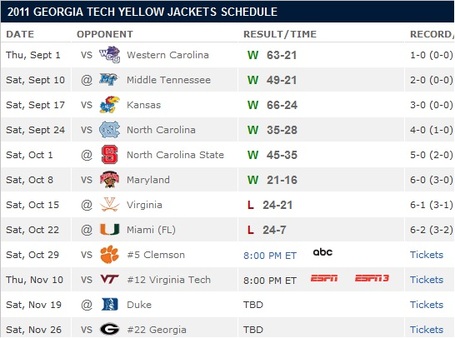