If you remember last season's UNC game, you are probably mad that I brought up the subject.  Last season Clemson was defeated in Chapel Hill by a depleted UNC squad.  Here is ESPN's recap of that football game.  We almost broke stuff here at STS, so if you want to see those analyses meltdowns, click back through the archives to last October.

Otherwise, here is what happened:  In typical Clemson fashion, the defense gave up several huge plays that allowed North Carolina to score 21 points on 255 total yards and beat our Tigers.  Clemson's offensive playcalling was pitiful and our coaches' responses were equally as bad.

This was also the game that broke the camel's back in terms of offensive philosophy and probably an inflection point for Swinney and crew.  It was obvious the playcalling and overall offensive strategy was not gong to work.  We refused to run AE when he was gashing the Heels for 5 yards a pop and forced him to share time with a back who was not producing.  Andre Powell's inability to properly substitute running backs along his stupidity in the post game presser probably got him fired.

Enough of last season's game.  Hit the jump and see what to expect tomorrow when UNC rolls into the Valley.

The first item I'll point out is Urban Myer and Chris Spielman will be doing the game for ESPN tomorrow.  If you're not in the stadium, you're in for a real treat as Myer did an excellent job earlier in the year explaining the Clemson offense, telling you what the offense should do/is likely to do, then explaining what they did/why they will do what he predicts.  Listen to him when he discusses defensive safety play and positioning in particular...Now on to UNC.

I'll go ahead and throw this out there for those of you who have been living under a rock:  North Carolina's football program has had a rough go of it the past year or so and is still riding on a bumpy path.  Head Coach Butch Davis appeared to have the program in the right direction to compete for championships until various scandals broke before the 2010 season.  Davis ended up being forced out of UNC prior to this season's fall camp.  Along the way former Oklahoma head coach and then-UNC defensive ends coach John Blake resigned after his relationships while coaching were questioned.  Yes, this is the same Blake who lost a lot of games at OU and yes this is the same Blake who allegedly burned all his accumulated recruiting files while with the Sooners.  I am not going to throw rocks but will say that this isn't exactly a surprise to many who follow college football.  Defensive Coordinator Everett Withers was named the interim coach following Davis' dismissal.

North Carolina still utilizes a variation of the old Jimmy Johnson Miami/Dallas 4-3 scheme.  If you haven't done it already, do yourself a favor and read up on the 4-3 Over.  Overall, they want to stay in the base 4-3 but UNC will be forced to play more Nickel against Clemson due to the spread looks/extra receiver matchups. Don't expect the 'Heels to be too aggressive defensively.  They will attempt to put pressure on the Tiger's quarterback via their front four with more stunting than blitzes.  You will likely see a good bit of zone coverage this weekend because we don't think Withers would be dumb enough to go all M2M. Its a big Cover 4 scheme that often looks like C2, with a sprinkling of C3. We expect to see plenty of C4 because VT had some success with it.

We'll see more of the same out of Clemson this weekend.  The Tigers need to tame the UNC front to give Boyd time to pick apart the zone defenses UNC throws at us.  Should UNC show a C1 or C0 look, Boyd obviously wants to look at how they defend Sammy Watkins then the Dwayne Allen matchup.  It is nice for Boyd to have Nuk Hopkins available that deep in the receiving looks.  Clemson will, as usual try to establish inside zone plays as well as the standards (buck sweep, jet/zip sweep, etc...).  We have also seen Chad Morris slowly add to the offense, so I wouldn't be surprised if a couple wrinkles off of current plays show up during the next couple weeks.  Not official (i.e., not backed by a statement from Morris or Swinney), but I would guess that Morris has about 70% of his offense installed to date.

Offensively, John Shoop runs the show in Chapel Hill.  Shoop played football at Sewanee and built a pretty substantial resume as a coach in the NFL.  Shoop spent 12 years in the pro game and served as the offensive coordinator for both the Chicago Bears (2000-2003) and the Oakland Raiders (2005-2006). He's a disciple of Joe Pendry and Gary Crowton (Bears) in terms of his offensive philosophy, so he likes the short passes. While his teams' offensive performances may not have been too impressive with the Bears and Raiders, the experience surely is.  Shoop is a guy who demands execution and has a reputation for conservative playcalling (if you have not seen much of him at UNC, just think back to the early '00's Bears teams), and he does not take many chances. He's 1-back 2-back and at least one TE on the field at all times, and he loves play-action passing. A definite pro-style scheme that you'll see Clemson go to its base 4-3 defense against.

North Carolina is led on the ground by Giovani Bernard and through the air by Dwight Jones.  Bernard has 760+ yards on the ground and nine touchdowns on the season Dwight Jones leads the football team in receiving with 687 yards and eight receiving touchdowns.  Yes, this is the same Dwight Jones who wanted to go to Clemson but, at the 11th hour, our compliance department told Tom Bowden he couldn't sign him so he signed with North Carolina.  Bryn Renner has had a productive year to date.  The sophomore has attempted all but one of the team's passes for over 1500 yards with 14 TDs and 6 INTs. He's not a bad QB, just young and inexperienced. See below for an offensive leader(s) comparison between the Heels and Tigers.

We don't think NC will deviate from what they've been doing too much, but they'll throw more against us because Shoop knows that Boyd + Jones against our CBs is not a bad matchup for the Heels. If he comes out only trying to run, UNC is going to lose....but that isn't exactly a firm assumption with the way we've been tackling this year. When Clemson blitzes, there will be a built-in hot or checkdown in this offense for Renner to take.  The Clemson defense will need to avoid being lulled to sleep.  Shoop will run the ball to A) gain yards and B) entice the CU DBs to creep/cheat up into run support position.  If/when he gets the latter, look for the Heels to get the ball downfield off of play action.  They've seen the same film we've seen and know CU's defense has given up a lot of big plays the past two seasons.

UNC Schedule (again, thanks to ESPN) 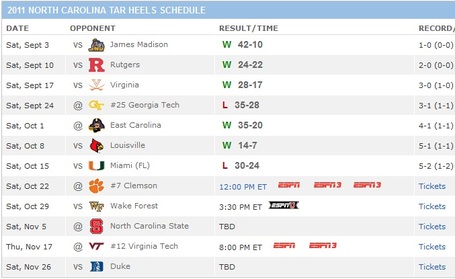