Share All sharing options for: Clemson Basketball - Previewing the Roster

As Part II of our basketball season preview, we'll look at Clemson's roster and what reasonable expectations should be for this group.

Clemson enters pre-season practice with plenty of question marks.  The biggest question mark is who is going to take Demontez Stitt's spot in the starting lineup?  This question arises because Clemson lacked depth last year and aren't able to carry over talented depth to this year's team.  This forces the Tigers to rely on instant impacts from true freshman.  This is not an ideal scenario and was caused by two things:  1) Clemson making a coaching change and only being able to bring in one recruit last year, and 2) a pair of early season transfers last year from Noel Johnson and Donte Hill, followed by the offseason transfer of Cory Stanton.  That leaves us with this roster: 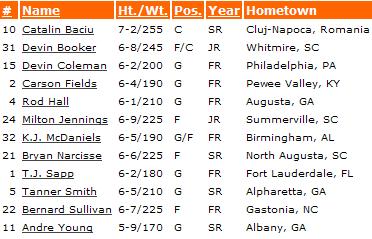 We'll start with the bright side. Clemson does return 3 starters and 4 of their top 6 players.  We know that Andre Young, Tanner Smith, Milton Jennings, and Devin Booker will start and be asked to play a lot of minutes this year.  That's an experienced group consisting of 2 seniors and 2 juniors.  We will have to rely on these veterans to help the young guys along because we lack experienced talent.  SR Catalin Baciu (Bobo) and Brian Narcisse will be relied on to provide minutes.  Bobo is a long body that we hope can be disruptive on defense, but other than that we don't expect much out of him this year.  Narcisse has tremendous athletic ability and has shown he is able to knock down an occasional 3, but he lacks the ball skills and basketball IQ necessary to play 30 minutes a game.

That brings us to the freshman.  According to early reports, Brownell looks like he may have a steal in TJ Sapp.  He has turned heads early, showing off a game that is similar to Stitt's.  Both are combo guards that excel at getting into the paint.  Sapp appears to have a better looking stroke than Stitt.  That being said, he isn't going to put up Stitt like numbers as a freshman.  If he does get the starting nod in the backcourt with Young, I'd be happy if he were able to put up 7-8 PPG, dish out a couple of assists, limit turnovers, and play solid defense.  We don't need him to become our main option on offense as a freshman.  We just need him to help run the offense and provide an offensive threat.

Devin Coleman and Rod Hall are two other freshman that should see backcourt minutes this year.  And although Sapp has received the most hype early, it wouldn't surprise me if one of these guys were able to jump into the starting lineup.  Both guys are physically ready to play in the ACC right now.  Coleman is a slashing lefty that has more of an offensive game than Hall.  Hall is going to get his playing time due to his effort on the defensive end.  He looks like a strong safety and has some people already calling him the best defender on the team.  He expects to be a work in progress offensively.

In the frontcourt, KJ McDaniels and Bernard Sullivan should also see minutes as true freshmen.  McDaniel is an extremely athletic wing.  Think Narcisse athleticism with more potential as a complete basketball player.  His playing time will mostly come spelling Tanner Smith.  He could potentially play 2-guard in a pinch.  Sullivan was the most hyped recruit out of high school.  He will provide depth to a very thin frontcourt.  I like his game and think he has potential, but I don't expect too much offensively.  He will need to mature physically and find a way to score on taller defenders (he's list at 6'7) in order to produce at this level.

So where should we expect to finish in the ACC this year?  Too many times I here the uninformed masses say "Clemson lost so-and-so and they are going to stink this year".  These same people do not realize the additions and subtractions that occur at other teams.  Therefore, when I try to distinguish where Clemson will fit in to the conference race, I look at the rosters of the other 11 ACC teams before forming my opinion.  That being said, here is my opinion.

I think it's clear that UNC and Duke are the head of the class.  UNC is a national title favorite and Duke is certainly a top 10 team.  At the other end of the spectrum, I expect Wake Forest and BC to be the two worst teams in the conference.  Wake was terrible last year and lost several starters to offseason transfers.  BC on the other hand practically lost their entire team to graduation, leaving them with a lineup that should feature at least 4 freshmen starters.

Georgia Tech and Maryland are going through rebuilding phases after hiring new coaches in the offseason.  Georgia Tech lost their best player in Iman Shumpert and the rest of their roster is lacking in talent.  Maryland, on the other hand, is struggling to find enough scholarship players.  Their frontcourt is very thin, inexperienced, and talent deprived.  I don't see Clemson being worse than either of these teams.

Virginia Tech is another team I expect Clemson to finish better than this year.  VT lost close to 70% of their minutes from last year.  They are bringing in a talented freshmen class, but I think Clemson's experience wins out.

So we've now narrowed our possibilities down to 3-7.  I think FSU is the 3rd best team in the conference.  They showed last year that they are going to be just fine without Chris Singleton.  They also have experience on the roster to replace Derwin Kitchen in Luke Loucks and Ian Miller.

Given Clemson's favorable conference schedule this year, I'd peg Clemson anywhere from 4-7 in the conference.  I think NC State, UVA, and Miami are all on Clemson's level in terms of talent and experience.

I see these 4 teams as middle of the pack teams that will be fighting for an NCAA berth at the end of the year.

Thoughts?  Am I too optimistic? Pessimistic?  Realistic?