Share All sharing options for: Clemson Basketball - Previewing the Schedule 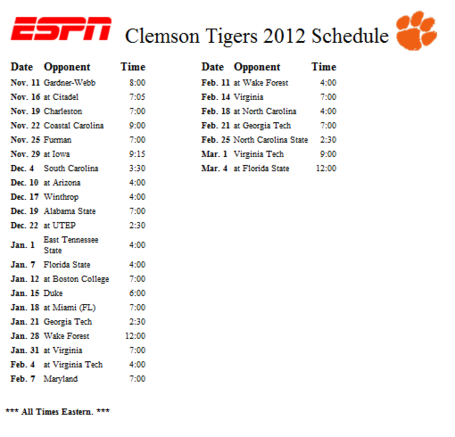 Before I start dissecting the schedule, I first want to solicit help from you guys. I provided Clemson's basketball coverage here at STS last year, but will not have the time to cover it all by myself this year.  If anyone is interested in joining the STS team as a roundball writer and would be able to support me this year, please send me an email so we can discuss. We'll need folks that can help conduct blogger Q&As, write game previews, and recaps.

Now on to the schedule. You might notice that the schedule looks very similar to last year's schedule, only with one notable inclusion. Clemson's picked up a big time out of conference game against Arizona as part of a home-and-home deal.  We'll be heading out west this year, with them returning the favor and coming east next year.  These are the types of matchups that Coach Brownell should continue to search for as he attempts to take this program to new heights.  Unlike college football, college basketball rewards teams for a tough strength of schedule.  Don't get me wrong, everyone needs to have a couple of patsies on the schedule to use as tune-up games.  But it is definitely beneficial to the RPI to schedule (and beat) tough out of conference opponents.

The rest of the non-conference schedule is nearly identical to last year...College of Charleston, a couple of Big South schools, and USC   Sakerlina does come to Littlejohn Colliseum this year.  Clemson also gets @Iowa in the ACC/Big 10 Challenge.

Clemson's pre-season tournament last year matched them against Long Beach State, Seton Hall, and ODU.  This year, playing in the Hawaiin Airlines Diamond Head Classic (Dec 22-25), we have a better opportunity for more glamorous matchups.  Clemson's first round opponent is a rebuilding UTEP squad.  Assuming we can get by UTEP, we will face the winner of Kansas State/South Illinois.  Both are good teams that should be a nice feather in the cap come Selection Sunday.  On the other side of the bracket is Long Beach State, Xavier, Auburn, and Hawaii.  I'd be shocked if Xavier didn't make it to the championship game, as that side is much weaker than the top half of the bracket.  UTEP, KSU/SIU, and Xavier should do more for our RPI and public perception than last year's Long Beach State, Seton Hall, ODU trio.  It should also attract more attention from the casual fan that generally disregards basketball until football season is over. Clemson should get through the non-conference schedule with only one or two blemishes.

Looking at the conference slate, you have to be happy about only having UNC (away) and Duke (home) on the schedule once each.  They are head-and-shoulders better than anyone else in the conference this year.  We are fortunate with the conference opponents that we face twice:  Wake Forest (terrible), Georgia Tech (rebuilding/new coach), Florida State (solid), UVA (improved), VA Tech (lost a ton from last year's team). So thankfully, even though we do expect to be a little worse than last season thanks to the loss of Stitt and Grant, we get a slightly better schedule.

In our next basketball preview feature, I'll look in depth into our roster, which freshman we should expect contributioins from, and where I expect Clemson to finish in the ACC.