Randy Edsall is no stranger to Northeast colleges and universities.  Edsall spent his playing days at Syracuse ('76-'79) playing quarterback then stayed with the Orangemen coaching various positions through the 1990 season.  Edsall was then the DB's coach and Boston College and for the Jacksonville Jaguars then spent a season as Georgia Tech's defensive coordinator ('98) prior to taking his first head coaching gig at UConn in December 1998 following the resignation of Skip Holtz (though Skip won there, he wanted the OC job at SC).  Edsall led the Huskies from the 1-AA ranks to 1-A then into the Big East and, following the 2010 season, to the Fiesta Bowl. There he ran a conservative I-formation offense that was very fundamentally sound, though low on outright talent.

Maryland's offense is directed by Gary Crowton, who we know well. Crowton has been a lot of places as offensive coordinator, including LSU, Oregon, Chicago Bears, and Georgia Tech. Crowton has two stints as a collegiate head coach: Louisiana Tech (1996-'98) and BYU (2001-'04).  LSU won the national championship with Crowton running the offense in 2007, so DrB is quite familiar with it. His scheme there was a blend of a no-huddle spread with a lot of carryover of NFL and BYUish principles. BYU guys generally prefer to throw the ball around, and at La Tech, where he really made his mark as an offensive guru, he threw it around a ton. He later grew to absorb whatever worked best for him, and the technical difficulty of an NFL scheme's formations and shifts did influence his offensive philosophy to the complex side. As a result, wherever he goes, he has had success and then later faltered. In Chicago he was one of the first guys to really try the bubble screens in the league. Once they were onto him, he got out. At LSU, his offense worked only with Quarterbacks that Jimbo Fisher had taught fundamentals to, and the offensive execution degraded from 2007 onwards steadily. Most of it apparently because it was too complex for the team to figure out. Ring a bell Clemson fans? You're looking at a Spence type of mind. Sometimes it'll look great, and sometimes they look completely lost, because he doesn't do a good job of keeping it simple for the players. Crowton values complexity to confuse a defense, as opposed to keeping it simple and executing several plays really well (like Morris).

Still, it could be said that he is a strong influence on Chip Kelly's offensive scheme. Kelly is from NH, and his passing game is basically Crowton. Crowton's offense at La Tech, New Hampshire, Oregon, and later did influence several guys. He basically made the constraint plays popular again. The guy is not dumb, but his brilliance does not translate in every situation to the field.

In our minds, Crowton's success at Maryland will depend on Edsall's use of restraint. If Edsall keeps him from overcomplicating his offense, he can do really well. However we do not believe him to be a great QB coach. This year, he's gone away from his 2-back/1-2 TE sets to more of a 3-wide, 11 personnel shotgun scheme that emphasizes the zone read. They run the zone read a lot, and Meggett is suited to the RB spot in such a scheme. Danny O'Brien is not suited to it.

You can see his basic information below (from the UMd AD website shown in the initial table). 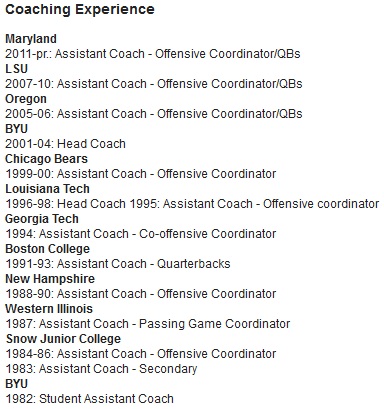 Maryland has moved to more of a spread attack this season and QB Danny O'Brien hasn't exactly thrived in the new offense.  Last year's ACC rookie of the year has less than 1000 yards passing in five games with 4 TD passes and 6 interceptions.  Last week against Tech, Maryland pulled O'Brien in the first half in favor of backup C.J. Brown.  Brown didn't exactly light up the Yellow Jackets through the air but did have (4 of 17 for 36 yards, 0 TDs and 1 INT) but did provide a spark on the ground with 9 carries for 124 yards.  Within those 9 carries was a long 77 yard touchdown scamper that kept the game close late. Brown has surprising ability as a runner, and is faster than you think.

I expect Edsall to play O'Brien for the most part but do expect to see some of Brown. Obviously when Brown is in the football game, the Terps are more likely to keep the ball on the ground and spring him off of a zone read type play.

On the ground it is all Davin Meggett. Meggett is the clear team rushing leader with 83 carries for 413 and two touchdowns. The next leading rusher is backup QB, Brown.  Meggett is a guy who averages 5 ypc and has the ability to rip off a big one with a little help up front.

Look for Maryland to show typical spread plays. Inside and outside zone, read option, a variety of screen passes, etc.  Again, Clemson will show nickel throughout the night Saturday to counter the spread attack.  I saw a ton of short passes and little screens from UMd in my limited film study. I do know, however, from last season and the game clinching series against Miami a few weeks back, that O'Brien can get the ball deep.  Clearly the Clemson corners will be challenged to make open field tackles and get off perimeter blocks to defeat WR screens.  Likewise, the secondary cannot get lulled to sleep underneath and allow a Maryland receiver to get open deep downfield.  Clemson will blitz some and show a couple different looks but will be leery of giving up the big play. Maryland's offense has struggled and Clemson does not want to give up cheap points. Look for us to play run-safe when Brown is in there.

Todd Bradford is new to the Maryland program this season, coming to College Park from Southern Miss where he served as defensive coordinator.  Bradford has experience on the offensive side of the football as well, as he served as co-offensive coordinator at BYU back in 2003.  I'll note that was his only offensive coaching experience.  Bradford is a 1986 Southern Utah graduate. His scheme uses a STAR linebacker, which is analogous to what DeAndre McDaniel was in VK's scheme. It is essentially a multiple-look 4-2-5 defense, and he drops the STAR into the box quite often. We dont think they have the right player there to make this scheme work however.

See his coaching stops below (again, courtesy of the UMd athletics website). 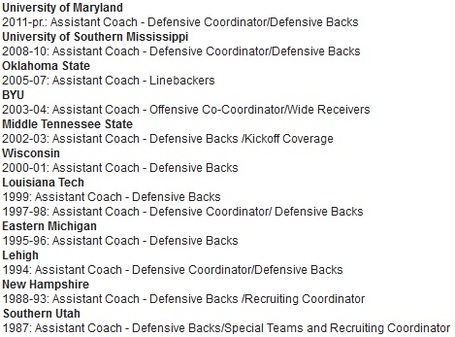 Maryland's defense this season has been, well, not so good.  We think letting former DC Dan Brown go was a big mistake. The Terps surrender nearly 380 yards/game.  UMd gave up 24 points to Miami, 37 to WVU, and 38 to Temple.  I'll note that the defense improved over the past two weeks, holding Townson to 3 points and Georgia Tech to 21.  Their DT had a monster game against GT, and really made the game winnable for them, so we'll be wary of him doing it again (22 tackles in one game, for a DEFENSIVE TACKLE). Georgia tech's offense is predominantly run-based and Towson isn't exactly a BCS powerhouse.  West Virginia pretty much had its way with Maryland to the tune of 388 yards through the air and another 92 on the ground.  Maryland's secondary has been garbage at times this season and is susceptible to a good passing offense and should get shredded by the Clemson receivers.  Temple brought the war to this defense and benefitted from a lot of missed tackles and a tougher attitude.  The Owls ran all over the Terps, proving Maryland has weaknesses in a lot of areas.  Long and short, Clemson's offense is better than Maryland's defense and should have a big day.

We will be looking to see that Tajh's injury didn't effect him seriously.  We also hope to see Andre Ellington at 100% and would be overjoyed if we could consistently run the ball between the tackles.  Otherwise, wind it up and let it go--especially for the playmakers at WR/TE. They dont have anyone that can cover Watkins or Hopkins, but for whatever reason that kind of thing has rarely mattered when we play MD (over the last decade or so anyway). We think that changes this weekend.

Maryland Schedule (again, thanks to espn) 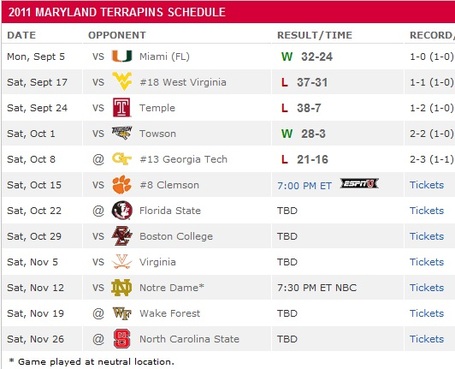