Stats below (Miami outlined in GREEN, Clemson in ORANGE) thanks www.espn.com. 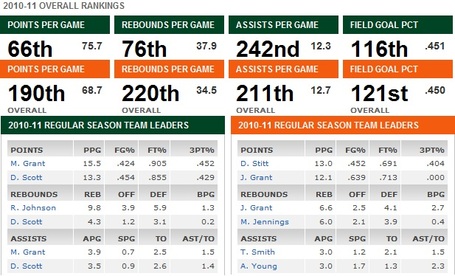 Starting linups for both teams:

Here is a comprehensive look at both teams' leaders in the major individual basketball statistics:

The focus for the Clemson basketball media and most of the fans this week has been on the addition of football star DeAndre Hopkins to the basketball roster. Hopkins joined the team after the bowl game and is simply not ready to take the court for the Tigers. Coach Brownell stated earlier this week that Hopkins will not dress out against Miami and will not dress until he is in basketball shape and ready to compete at the collegiate level.

Clemson had a trying start to the 2010-2011 season. This team lacks fundamental play that is necessary to execute Brownell's offense and is playing with nine roster players after various player departures. As we have stated here before, Clemson has to have better jump shooting and needs improve movement without the basketball. The Tigers have shown some improvement from the free throw line which is always a positive.

Frank Haith has been at the "U" since 2004. Under Haith, the Miami program has improved with his high point at the school being an NCAA birth and first round victory during the 2007-2008 basketball season. The position at Miami is Haith's first head coaching position. Notable stops as an assistant prior to filling the ‘Canes to spot include Texas (under Rick Barnes), Texas A&M, and Wake Forest.

As the stats show (see below), the Miami offense is dominated by three names, Malcolm Grant, Durand Scott, and Reggie Johnson. Grant is a Villanova Guard transfer who averages 15.5 ppg. The Brooklyn native is a threat from behind the arc, making over 45% of his three point attempts on the season. Scott is also a guard who grew up in New York and makes over 40% of his three point attempts. Johnson, a Winston-Salem native, is the ‘Canes big man at 6'10" and over 300 lbs. Johnson averages nearly 13 points and 10 rebounds per game in 22.7 minutes per contest and sports close to a 60% shooting average from the floor.

Clemson will obviously need to stop these three guys to be effective. The Tigers will also need to fight fatigue, particularly at the guard position. With a relatively small roster and being thin in the back court after the departure of Noel Johnson. We will be watching several Clemson players tonight, including Devin Booker's play inside and Stitt/Young's ability to shoot from the perimeter and create opportunities off of the dribble. As always, we are sticklers for effort and want to see our players MOVE WITHOUT THE BASKETBALL.