I've already stated my thoughts on this, so no need to go into that again. I'll just provide the info for those who want to look at the plans and figures.

Clemson University’s athletic department is continuing its plan to improve facilities by announcing a goal to invest $50 million over the next five years in capital projects. The master plan includes enhancements to facilities for football, baseball, basketball, soccer, tennis and golf.

The projects, many of which are pending board of trustee and state approval, will be funded through private gifts and generated athletics revenues. A committee led by Ed and Jane Duckworth of Atlanta will study the plan and implement a funding strategy. All gifts in support of these initiatives will be included in The Will to Lead capital campaign.

"This plan is a continuation of what Clemson started in 2003 with the WestZone project to enhance our football stadium and build a first-class operational center for our football program," said Athletic Director Terry Don Phillips. "We must develop facilities to allow us to continue to put our student-athletes in an environment where they can become as good as they possibly can be and also to increase our ability to recruit top student-athletes."

"Over the past 10 years, Clemson has invested nearly $120 million in athletics facilities enhancements. These investments have benefited virtually every team, from football to women’s volleyball, from baseball to track, from golf to women’s rowing," said President James F. Barker. "The next phase of improvements will be equally comprehensive in scope. Just as importantly — speaking as a president and architect — they will also improve pedestrian safety and visually enhance one of America’s most beautiful campuses."

I like how we have to contract out how to raise the funds. Why not send a separate envelope with the usual IPTAY mailing and use a different account to fund it? See I gave y'all that advice for FREE.

Continue for line-items and pictures...

Football Upgrades - WEZ Phase III (pdf file with more pics) construction is set to begin, with the Oculus, and a plan is set to build an Indoor Practice Facility over an existing artificial turf field where the current fields already are. Total price for Phase III is 15.3 million; cheaper because the expensive portions (grading, foundation) are already done. It will include a new concourse expansion on the NW side, the oculus, a heritage museum. This is set to be done by the beginning of the football season next fall. Bid Specs can be found here.

It was stated by TI that the expansion creates a larger area that can be used as a Training Table facility. 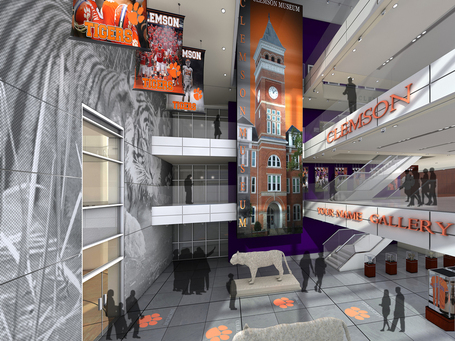 Total Cost of the IPF (pdf renderings) will end up around $10 million. It will have big garage doors to make it open-air if needed. It is cheaper than what is used by other schools for the following primary reasons: turf field is already setup and installed, Clemson owns all the land already, and Clemson has a separate football-only facility in the WEZ. Personally I think they can make it look more aesthetically pleasing than these drawings and still match the architecture of the Track building and Clemson overall. It could be done by the beginning of the 2012 season.

Edit: This has been moved ahead of Phase III Construction but is still slated for 2012. The contract bid by Sherman Construction was 9.3 Million with line-item upgrades as funds become available. 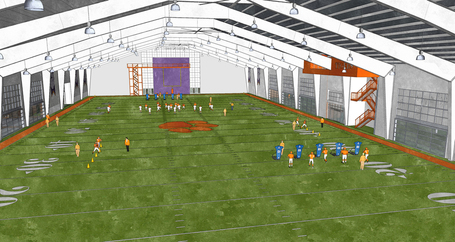 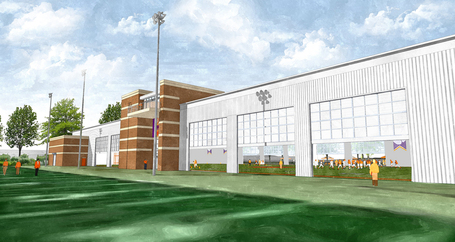 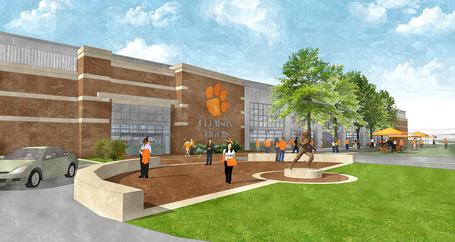 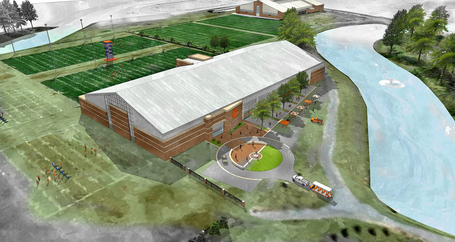 Baseball will get a new players locker room and facilities on the 1st base side, along with the addition of a museum, trophy room, player's lounge, study/meeting rooms, trainer's room, coach offices, and suites. Total cost is $5 million. Baseball completed a million dollar expansion in LF last year with the Chapman Grandstands. No timetable is given that I have seen, but the renderings of the plan are available here. Take a look at them, its pretty nice. I do wonder why it looks like there are only two suites being added though. Just 2? 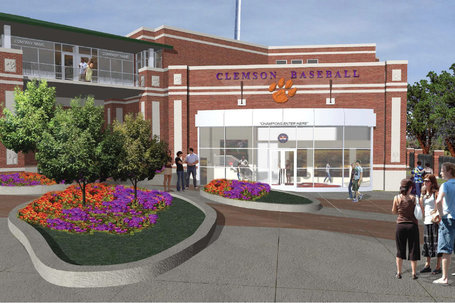 Basketball will get another practice facility built on the corner of Littlejohn Coliseum facing towards Perimeter Rd and Jervey. It will also include an open area that can be used for gatherings. I've not seen much of the plans or renderings of this and no timetable is given. Total cost is $5.1 million. 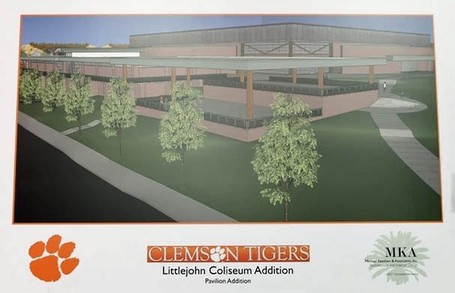 Soccer - Riggs gets a much-needed facelift with a new Championship Plaza, better stands, new scoreboard and landscaping. The new Pedestrian Bridge along 93 will be there to help drunks not get hit by cars in the road late at night, or on football gamedays. The city is giving up 200K for the bridge to go with 800K in Federal funds, and the Riggs changes are estimated at $6.1 million. 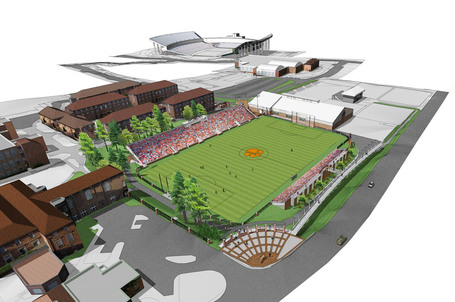 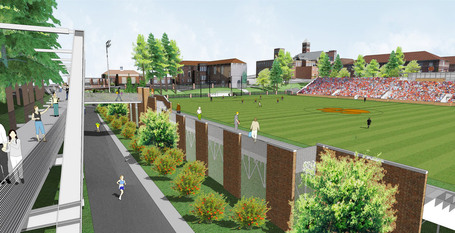 Tennis gets new indoor courts, seating, roofing for seats and landscaping at a cost of $5.1 million. 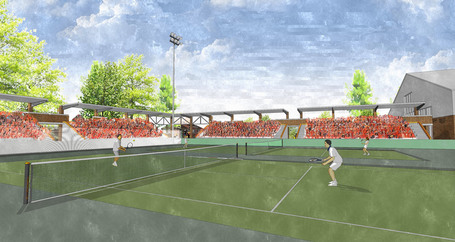 Golf is already getting the $2.6 million 3-story Larry Penley building underway behind the Driving Range.

Some of this I can see them taking 5 years to actually get finished. If they are smart they'll campaign for the funds wholesale and collect the funding before beginning all the projects, because I could see Clemson fans stop paying anything in after they see the Big 3 sports with new shiny stuff. Then again they need to get cracking on it as soon as possible for each sport too.

I have been unable to find renderings or plans for the basketball facility so if anyone finds it please link it in the comments.