Inside Zone Rushing: Ellington scores on a 60 Yard Scamper against N Texas

Share All sharing options for: Inside Zone Rushing: Ellington scores on a 60 Yard Scamper against N Texas

We received quite a few requests this offseason to feature more individual plays this season.  Today we want to chat a little more about the inside zone rushing plays that have been featured at Clemson recently.  Andre Ellington has flourished making the correct decisions when his number has been called the past two seasons, so expect to see more of this as the year moves forward.

The play that I want to talk about today is Ellington's 60 yard TD rush early in the North Texas football game.  This is a basic play that set up easily to diagram and give everyone a good idea of how inside zone blocking works.

Clemson lined up in a standard Ace Spread formation.  I cannot be certain of North Texas' personnel, but to eliminate arguement and simplify the explanation will say that they were in a base 4-3 set.  Clemson's spread formation caused the two outside linebackers to line up head up on both of Clemson's slot receivers.  It is also important to note that the Mean Green lined up with two safeties.  At the snap of the ball, the OLB at the top of the screen blitzes, putting the safety on that side of the field in what looks like man coverage.

Clemson called an inside zone play, probably 31 since it appears as though the play was designed to go to the left side of the formation.  A good reference for some zone plays Clemson likes to run is Dr. B's piece on 34/35.

From our post earlier about zone blocking in general, here is what we say about technique:

On this particular play, the backside guard does not get inside position on the backside DT BUT the backside tackle does get proper position on the end.  It should also be noted that MIKE is flowing towards the playside.  The running back sees this before or during the mesh and makes ONE cut behind the backside offensive tackle (ensuring a seal) and breaks free from the backer coming off the edge, and accelerates through the hole.  The rest of the play is pure athleticism.

Here is how this all played out in diagram form: 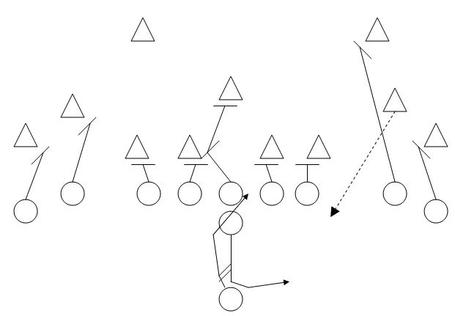 Here is what it looked like frame by frame: 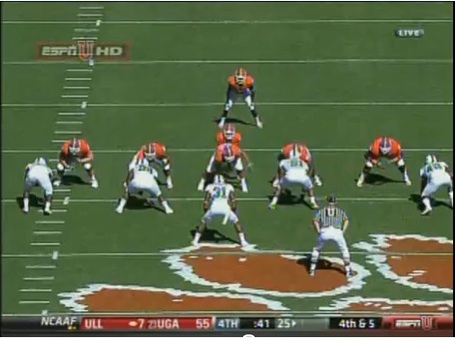 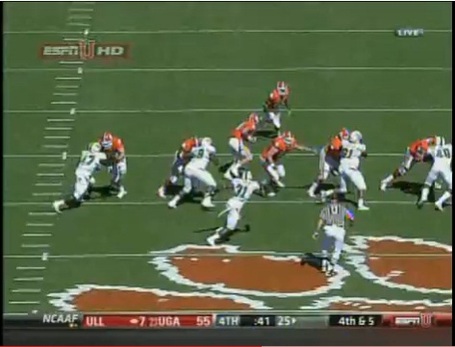 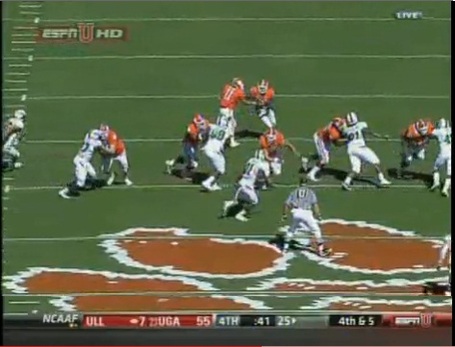 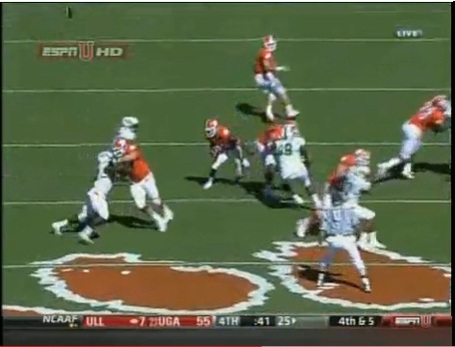 And here is the video replay: